How to Steal an election. Image by Steven Nass (Own work) (CC BY-SA 4.0), via Wikimedia Commons.

The movement to ban gerrymandering continues to grow in Wisconsin. At least eight more counties will be holding nonbinding referendums calling for non-partisan redistricting on November 3. 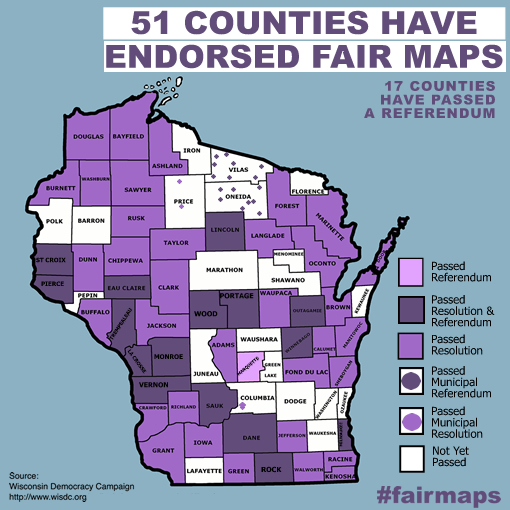 Activists are also working in about a dozen other counties to get such a referendum on their ballots, as well.

To date, 17 counties in Wisconsin have overwhelmingly passed nonbinding referendums to ban gerrymandering and to give us independent, nonpartisan redistricting, like the state of Iowa uses.

And 50 county boards have passed resolutions urging the State Legislature to pass a law to give us fair maps. In some counties the idea was approved both by vote of the county board and by voters via referendum. All told, 51 of 72 counties in the state have endorsed fair maps.

The movement to end gerrymandering has been opposed by Republican legislators and pushed by various groups, overseen by Wisconsin Voices, whose state-wide organizer is Carlene Bechen and can be reached at carlene@wisconsvoices.org.

It has also been supported by the Wisconsin Democracy Campaign, which has created a toolkit with more information on the topic.