For every person not counted, the state could lose $1,600 federal funding a year.

By Ana Martinez-Ortiz, Milwaukee Neighborhood News Service - Jun 11th, 2020 09:18 am
Get a daily rundown of the top stories on Urban Milwaukee 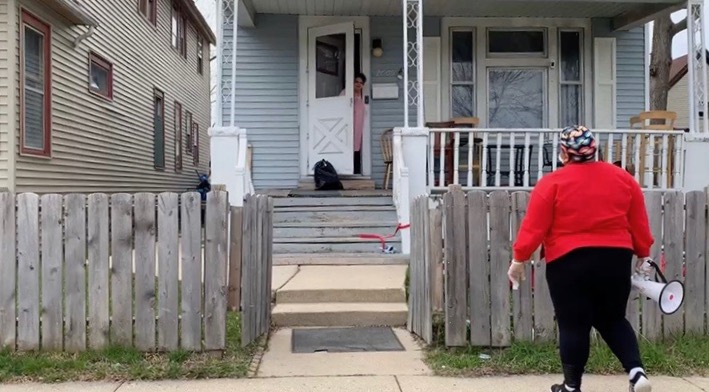 Patrice Gransberry, 59, was excited to hear that 2020 was a census year. When the questionnaire arrived in the mail, Gransberry wasted no time filling it out.

“It was easy,” she said. “The questions were simple and straight to the point.”

Since then, Gransberry has been encouraging others to do the same.

It is about getting funding for the community, she said. With an accurate count, her neighborhood, Metcalfe Park, can receive the money it needs for health care, parks, libraries, food services and more.

Census results will determine how the federal government distributes $675 billion among the states for the next 10 years. The number of people counted per state correlates with how much funding each state receives.

The funding will influence, among other things, public transit, housing assistance for elders, highway planning and construction, and food programs in schools.

Gransberry, who has lived in Metcalfe Park for several years, also is working with the group, Metcalfe Park Community Bridges, to spread the word.

Melody McCurtis, deputy director of priorities and organizer for Metcalfe Park Community Bridges, said before the organization formed in 2012, it asked residents about their priorities. Of the five areas listed, civic engagement was among them.

Civic engagement equates to power, and the census is a part of that, she said. After conducting a neighborhood survey, McCurtis found a lot of people did not know about the census, which she argues is probably by design.

“It’s not communicated in way so that the community feels like it matters,” she said, adding that people without internet access were less likely to know about it.

Danell Cross, the executive director of Metcalfe Park Community Bridges, said people want to know what the census does for them. She tells them the census gives funding for community block grants, which helps residents improve their neighborhoods, and determines the number of members each state has in the House of Representatives – “the people representing our needs.”

Community members want the funding, but they also want a say in where the money goes, Cross said.

Lidia Villazaez, the community outreach manager for Layton Boulevard West Neighbors, said the group began its census education and outreach at the end of last year. The group held community events, which is where Anali Albor, a Silver City resident, first heard about the census.

Albor, 32, believes it’s easy for people to forget about the census since it only happens every 10 years. She said Layton Boulevard West Neighbors has helped inform residents about its importance.

Both groups partnered with Wisconsin Voices, a group that encourages civic engagement and pushes the progressive movement, to educate themselves on the basics of the census.

Villazaez, who has been working with Layton Boulevard West Neighbors for the past several years, said being a trusted face in the community has given the organization credibility to spread the word.

Through her work, Villazaez found that some people had only a superficial understanding of the census while others did not feel like the outcome would affect them. While she would explain the basics, she also made a point to understand why someone might hesitate to fill out the form.

Change may not happen right away, but it will happen, she said.

Before the pandemic and the safer-at-home restrictions, Metcalfe Park Community Bridges got 300 people to pledge to take the census, but the group has been forced to adapt its strategy. Since the quarantine, the group has been issuing care packages filled with essential items such as food and information on the census. Residents in the neighborhood can fill out a form to receive a package.

“The time is now, and we have to be counted because we do matter, and we can create change,” McCurtis said.

In case you missed it: Why the 2020 census should matter to you.