How Bad Is The Pandemic Recession?

The numbers tell a sobering story. Will policymakers learn from it?

Wisconsin and the nation have seen many recessions. How bad is this one compared to the past and what might we learn from that? 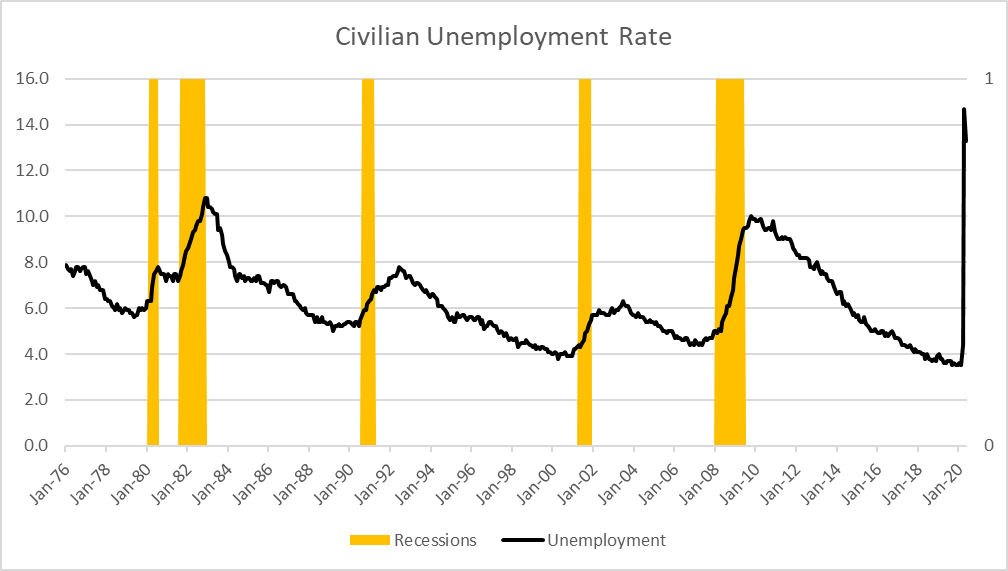 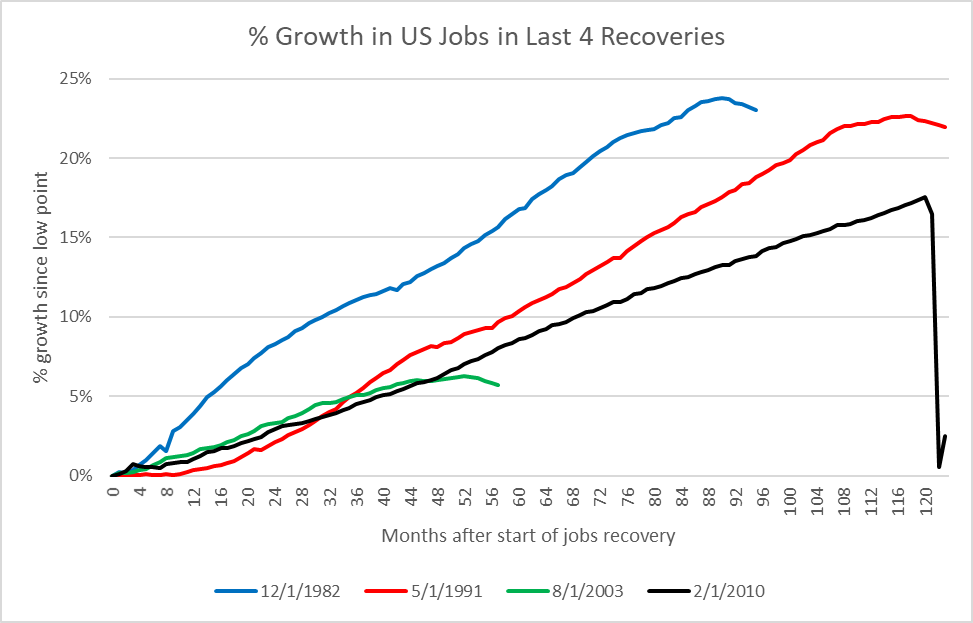 % Growth in US Jobs in Last 4 Recoveries

One notable feature of the latest recovery is the lack of evidence that the presidential transition from Barack Obama to Donald Trump (in the 83rd month) made a measurable difference in the number of jobs. Between February 1, 2010 and January 1, 2017, the United States added jobs at the rate of 192,000 per month. Between that date and February of this year the rate dropped to 183,000 per month. While this does not prove that Trump’s policies caused the downturn, it certainly does not support claims that Trump’s tax cut created jobs.

A notable feature of the three longest recoveries is that each is weaker than its predecessor. The annual growth rate of the 1980s recovery was 3.2 percent, compared to 2.3 percent in the Clinton recovery, and 1.8 percent in the recovery that just ended. 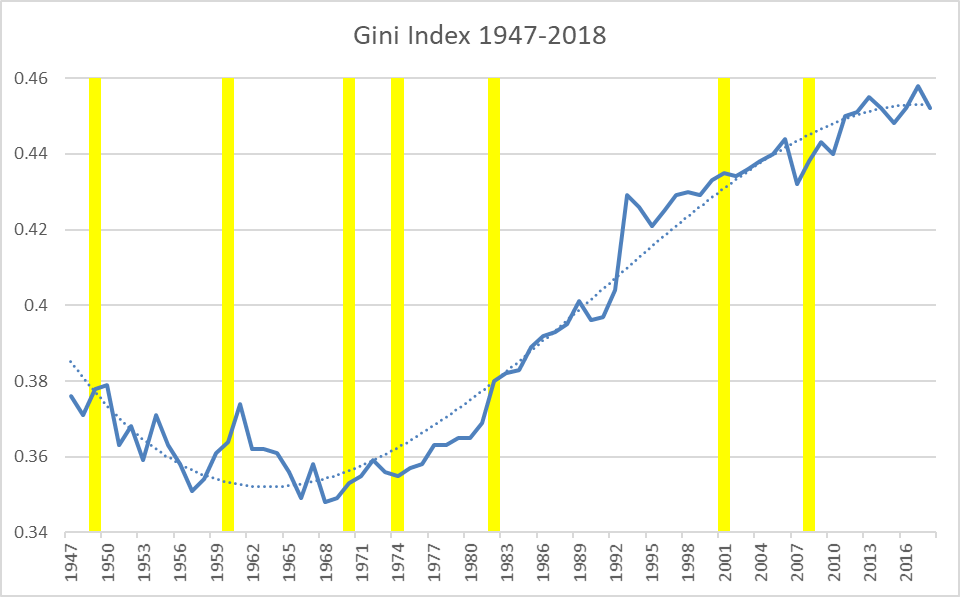 It seems likely that growing inequality is a contributor to a less robust economy. If a larger proportion of wealth and income flows to people who are already wealthy, that holds down demand for goods and services. Although there are many factors that may contribute to inequality, government policy also plays a role. 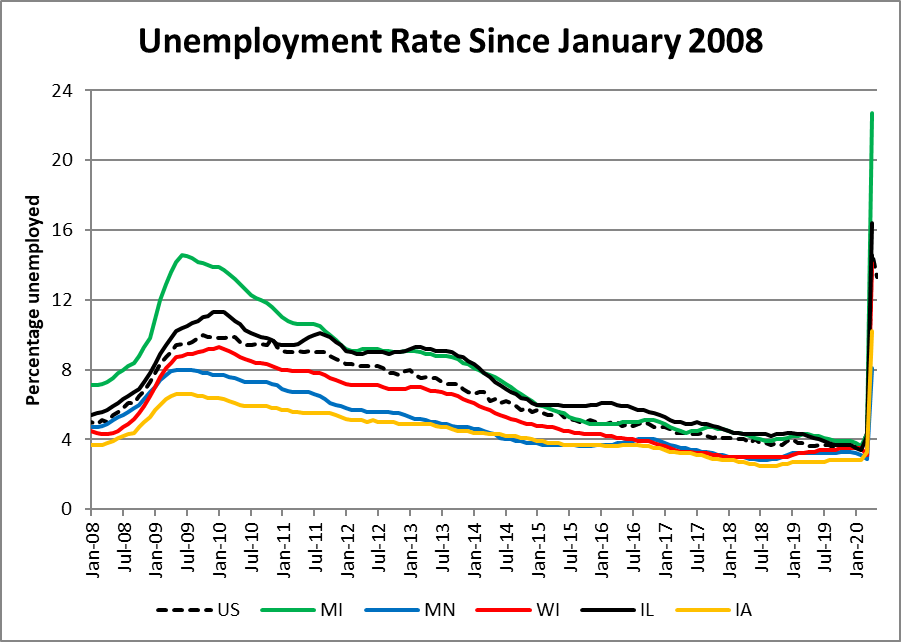 With the decision to put the economy on hold to minimize the spread of COVID-19, unemployment rates jumped both nationally and in Wisconsin’s neighbor states, as shown in the next graph. 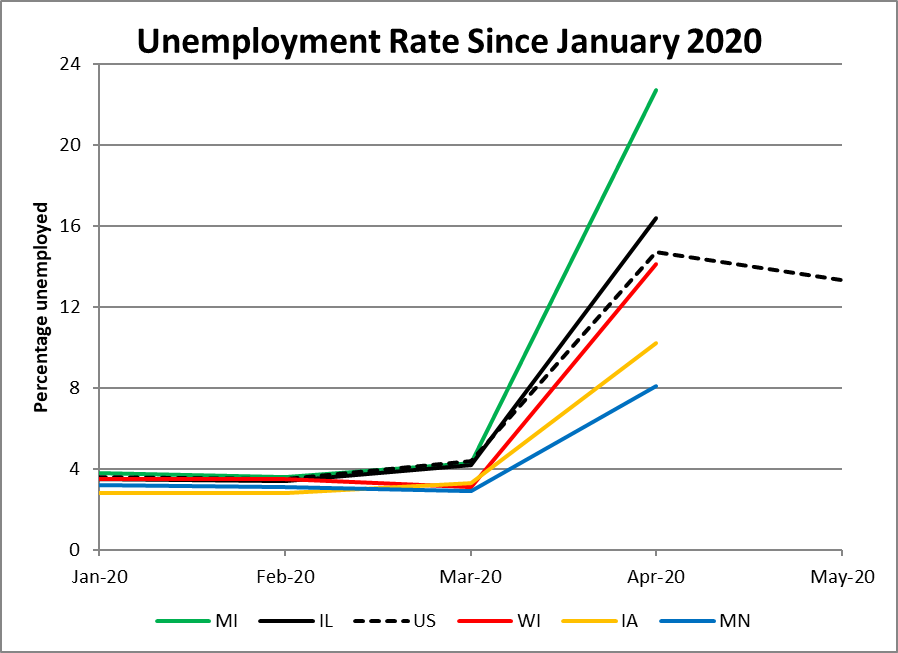 As the graph shows, the rates for April, when the effect on the economy first seriously hit, vary widely. Some of this variation may reflect difficulties state agencies have in processing claims for various forms of relief. Perhaps we will get a better picture when the state employment and unemployment numbers for May are released on June 19.

As it is, the only estimate available for the May unemployment rate is for the whole nation. It caused some surprise by showing a decline from 14.7 percent to “only” 13.3 percent. The good news is that it shows the programs aimed at counteracting the coming recession are having an effect. The bad news is that the U.S. Senate leadership is threatening to use the lower May number as an excuse to delay further aid.

The next graph shows job growth since 2011 in Wisconsin, its neighbor states, and the nation. Like the nation, the states saw a substantial drop in jobs in April: it looks like they have fallen off a cliff. 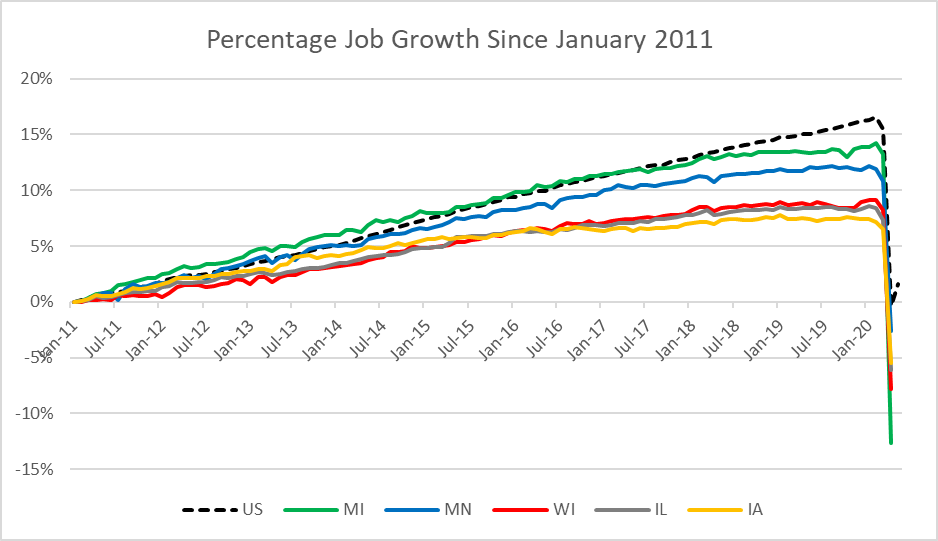 What are the takeaways of this history and data? Even if the reported decrease in the unemployment rate turns out to be a real one, the rate is still very high by historical standards. The danger is that it gives ammunition to Republican senators who are resisting the passage of legislation extending help to those losing their jobs, to small businesses threatened with closing permanently, and state and local governments faced with lower tax revenue and higher costs. Given the unemployment rate still remains higher than at any time since the Great Depression, that could be a huge mistake.