Prison Admissions to Rise Amid Pandemic

Pause in admissions ends this month, even as COVID-19 numbers rise.

By Gretchen Schuldt, Wisconsin Justice Initiative - Jun 6th, 2020 12:28 pm
Get a daily rundown of the top stories on Urban Milwaukee

Prison populations, which have declined since March when the Department of Corrections stopped accepting new inmates from counties in response to the coronavirus pandemic, should start trending up again as DOC slowly starts re-opening cells to newcomers.

The overall adult prison population has dropped 6 percent since Feb. 28, just prior to the start of the pandemic, according to DOC figures. That drop can be largely attributed to a decline in admissions, not to an increase in releases. 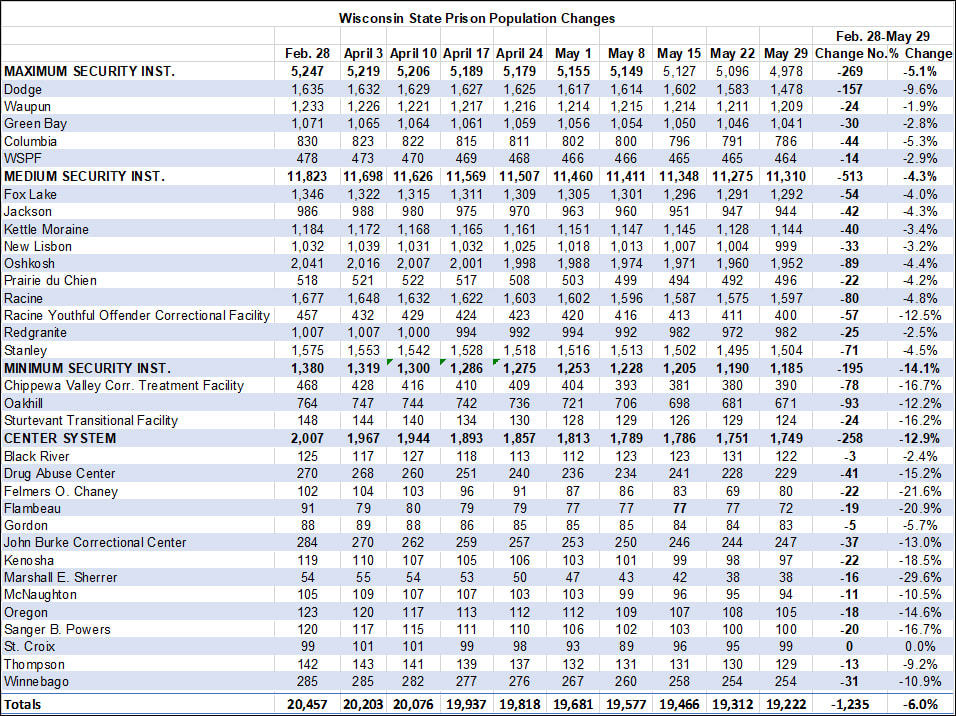 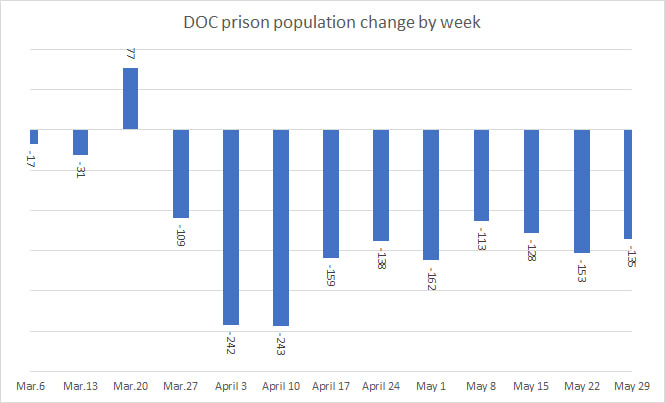 Incarcerated people continue to express apprehension and anger about the virus and their treatment in prison. Inmate testimonials are below. They have been edited for length and clarity and to protect the writers’ identities:

I put in a hsu (Health Services Unit) form saying I wasn’t feeling good and I was woke up the next morning at 1 a.m. and they gave me a mask and brought me and my celly to hsu where I was given a flu test which was negative then they gave me the coronavirus test and told me we were being put on quarantine until the results came back….They said we were the first people going to segregation on quarantine because the hsu unit was full so they said they cleared a wing out in set for us.

So me and my celly were forced to walk ourselves to the hole at 3 a.m. then when I got there they made me strip search and wear restraints just like a seg inmate. I tried to refuse telling them if they are not subject to do this over on the hsu unit then we shouldn’t have to do it either and I told them that putting on them restraints against my will when I did nothing wrong gives me flashbacks …I told them I wasn’t trying to go through that again.

I told them…I need to talk to a psychologist and a white shirt I was told I would see both but the whole time I was in seg I saw neither. I was told if I didn’t put the restraints on I would receive a major ticket so I had no choice….I was treated worse than a seg inmate. A few hours after I was there the Sgt came to my door and told me…I had to wear seg oranges and I had to give him my keep-on-person meds which was the only property I had. So I tried to refuse until I was again threatened with a major ticket. I gave up my meds and my greens….I was told we would eventually get our property like the guys on the hsu unit get it they even get there electronics but they did the opposite and took what little property I had. I couldn’t even get a book!

(The man said he developed a migraine.)

My migraine got so painful I was throwing up in the toilet crying tears and begging god to just let me die because I couldn’t handle the pain and I was pressing my emergency button and the Sgt wouldn’t answer it. Later I asked him why he didn’t answer it and his only response was there’s a epidemic. I had a migraine the whole time I was there until I finally got my meds. I was denied my meds all the way from Saturday until Tuesday night at 8:30 p.m. I was told I would be released as soon as my test results came back. They came back Monday morning and we still were not released until Wednesday! I didn’t get a shower the whole time until Wednesday. I wasn’t given none of my property…. I wasn’t allowed any contact with family or friends, no phone calls no paper or envelopes to write. I was completely denied psych devices.
***

I just got off quarantine because I had a court deadline and went to the library and may have be in contact with an officer who may have COVID-19. I sat for 14 days and they let me return to my old cell. Now it’s like 4 guys may got it. They have symptoms of COVID-19. This what scares me. All the individuals who got COVID-19 are housed in the same building as the people who don’t. We are in rooms that have holes in the door. We share the same vents. We are not safe.
***

So as of last night at least one inmate has tested positive and has been taken to isolation, also 26 inmates in association with that positive test have been put in quarantine. They also implemented a new policy that all staff and inmates must wear masks..This is laughable if you had been here to see all the poor examples of “social distancing” that have been taking place up till now. You literally could have shot a public service announcement video here showcasing these guards showing you exactly what not to do!! In the bathhouse in a approximately 6’x20′ walkway there were 11 officers hanging out shoulder to shoulder..no masks..like I said laughable…but now that one of us is infected everyone should wear masks? Never mind the underlying question of “How did he get infected?” It wasn’t one of us that infected him. If they had implemented a policy of masks for staff 2 months ago when this started or even a month ago perhaps we wouldn’t be where we’re at right now..It was kinda funny right after they made the announcement that everyone needs to be wearing a mask ALL of the staff were able to immediately miraculously produce masks, many of the custom ones so they obviously had them ready on standby…there seems to be a certain level of negligence at play here on the part of those making the decisions….