Property values are increasing in the neighborhoods surrounding Downtown. The news would generally be seen as a positive, but city officials have spent the past couple years plotting strategies to avoid displacement for long-time residents.

“There are a lot of people in the community that don’t know all of the efforts we are taking to address this issue,” said Alderman Jose G. Perez at Tuesday’s meeting of the Zoning, Neighborhoods & Development Committee. The Department of City Development crafted an anti-displacement plan in February 2018.

The highest-profile of the strategies is a public-private partnership to provide property tax assistance payments to homeowners experiencing growing assessments and limited incomes. It’s based on an effort in Atlanta.

“We are pretty limited in Milwaukee due to the framework we are operating under,” said DCD long-range planning manager Sam Leichtling. Under state law, the city cannot write checks to itself to pay taxes for its residents. A uniformity clause is included in the state constitution which also prevents capping assessments or providing other special treatment.

But private entities are free to do as they wish. In June 2019, the Greater Milwaukee Committee‘s MKE United initiative, already focused on the areas around Downtown, stepped in to lead the anti-displacement fund. “They were able to work really rapidly to launch this program on a five-year pilot basis,” said Leichtling. The organization raised over $300,000 for the fund in partnership with the Greater Milwaukee Foundation.

Residents who own their home and have lived in it since January 1st, 2015 are eligible provided they are in targeted neighborhoods, have an income below the city’s median income and are current on their property taxes. For 2019 that was income under $36,575 for a single person and up to $60,610 for a family of six.

An assistance payment covers the growth in the property tax bill, not the entire bill. “Seeing an increase of even $400 on your yearly taxes can make things really difficult,” said MKE United director Tony Panciera.

Of the 260 households estimated to be eligible, only 111 applied. Of those, 86 received assistance, with 25 not seeing an increase in their assessment in the past year, but being certified as eligible in future years. “Because of how quickly this moved to implementation,” Panciera noted, there may be an increase in signups in the program’s second year.

Those eligible are in four neighborhoods: Walker’s Point (east of Interstate 94), Halyard Park, Brewers Hill and Harambee (south of W. Center St.). The city previously identified the areas based on their assessments increasing more than 10 percent above the city average in the past five years, the neighborhoods demonstrating displacement risk factors and the presence of market-rate housing development.

In its first year, the program hit the mark on who city officials hoped it would serve. “The participants have owned their homes for an average of 22 years,” said Panciera, noting that 80 percent have owned the property for over a decade. Demographically, 56 percent of participants were over the age of 61 and 74 percent are people of color. The median household income was $21,916.

What will induce the remaining eligible homeowners to participate? “I think the turnout could have been much better if more people knew it wasn’t government connected,” said Riverworks Development Corporation financial clinic director Coretta Herring. “There is a large Hispanic population that was concerned about even applying for the program.”

Riverworks served as the fund administrator,  with WestCare, Southside Organizing Center and the United Community Center assisting with community outreach. A number of open houses and mailings were conducted by the organizations. The program also received the backing of the Milwaukee Urban League, Medical College of Wisconsin and LISC Milwaukee.

“This is an ongoing and evolving strategy,” said Perez in May 2019 when the plan was first unveiled. The anti-displacement efforts have been championed at City Hall by Alderwoman Milele A. Coggs and Perez.

“One of the things we want to make sure of, as much as we possibly can, is we are not pushing people out of the neighborhoods they call home,” said Coggs.

A second application window will open for the fund in later 2020. 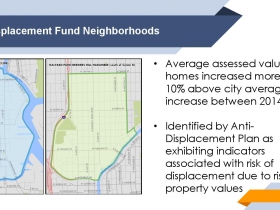 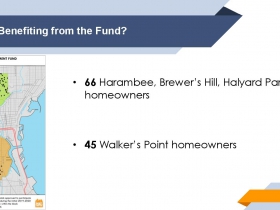 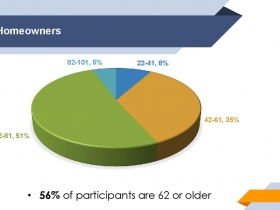 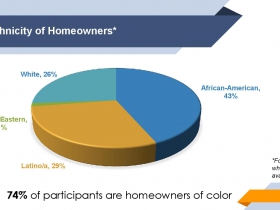 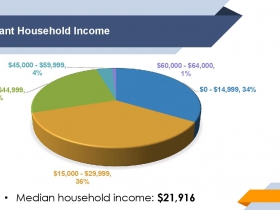 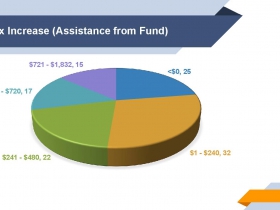