69% of Wisconsin voters say Trump did too little to prepare country for COVID-19.

By Ruth Conniff, Wisconsin Examiner - Apr 18th, 2020 05:17 pm
Get a daily rundown of the top stories on Urban Milwaukee

The political parties have only begun to take stock of the fallout from Wisconsin’s chaotic April 7 election. But Judge Jill Karofsky’s 10-point win over conservative Justice Daniel Kelly in the state Supreme Court race is a sign that the political winds are shifting against President Donald Trump, says Brad Woodhouse, executive director of Protect Our Care, which together with the Center for American Progress Action Fund, commissioned a new poll of voters across the Upper Midwest.

“I think Wisconsin is like the canary in the coal mine,” says Woodhouse. In the state Supreme Court race, Karofsky overcame “every trick in the Republican voter suppression playbook,” for the upset win. 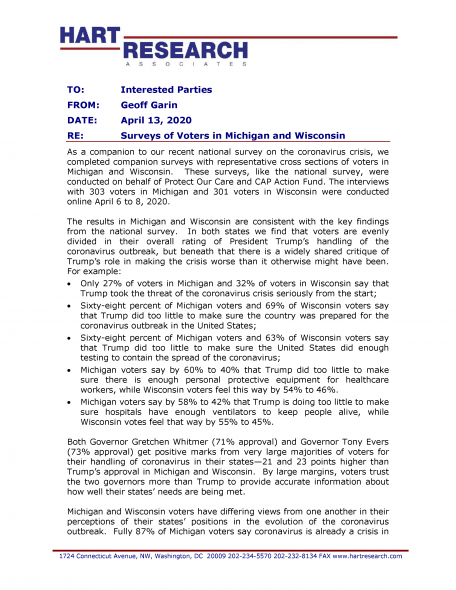 Summary of survey results of voters in Wisconsin and Michigan commissioned by Protect Our Care (page one).

Plus, Woodhouse says, national and the state-specific polls his group is releasing on Friday show that “people have caught wise” about Trump’s failures of leadership when it comes to the coronavirus pandemic. By large margins, voters in Wisconsin and Michigan trust the governors of their states more than Trump to provide accurate information about the pandemic and how well their states’ needs are being met, the poll by Hart Research shows.

The firm conducted interviews online with 303 voters in Michigan and 301 voters in Wisconsin from April 6 to 8, 2020.

While voters in both purple states were evenly divided on Trump’s handling of the pandemic, survey results showed “a widely shared critique of Trump’s role in making the crisis worse than it otherwise might have been.”

After all, Trump endorsed Kelly in person last January, plugged his candidacy in multiple tweets, and even brought up the Wisconsin Supreme Court race during a nationally televised press briefing on coronavirus. “And then not only did Dan Kelly lose in a landslide, but Trump did worse than Dan Kelly,” Wikler said. “He got about 75,000 votes fewer.” In other words, thousands of Wisconsin conservatives who cast their ballots for Kelly didn’t bother to vote for Trump, the only Republican presidential candidate on the ballot.

To be fair, state Republican Party Chair Andrew Hitt responded, the Supreme Court election took place during a contested Democratic presidential primary. Under the circumstances, “I was very happy with what we did and how fast we adapted,” Hitt said. And the electorate in November will be significantly different, and about twice as large, Hitt added. 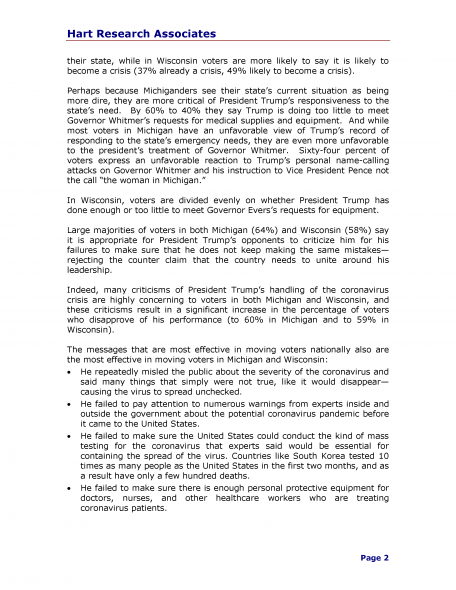 On April 7, “over 900,000 people voted in that primary for the Democrats, about 630,000 voted for the President,” Hitt pointed out. Plus, “Bernie Sanders stayed in the race. His advisors admitted in The New York Times that part of the reason he stayed in the race was to help out Jill Karofsky.”

Hitt wryly congratulated Wikler on driving turnout by keeping the primary going: “Bernie Sanders got nearly 300,000 votes and dropped out the next day.”

Wikler teased Hitt about the Karofsky’s surprise win: “Stick with the exact organizing model that you used in the Supreme Court race just now. I think that’s a great template for the Republicans for the fall.”

Hitt dismissed the idea that state Republicans’ insistence on holding an in-person election on April 7, contrary to all public-health advice, backfired, causing voters to turn against them, and their preferred candidates, in disgust.

’’I don’t think that people voted based on that,” he said. “I think what we see here is we had a Democrat primary, I think once we pull the voter file and take a look at exactly who voted, I suspect that we needed to do a better job of activating those solely Trump-motivated voters.”

Trump might be right that he can shoot someone on Fifth Avenue without losing the support of his loyal base, says Woodhouse, but he points out that Trump won by fewer than 80,000 votes spread across Wisconsin Michigan and Pennsylvania in 2016. “So, you know, the president can maintain most of his base but he can’t afford to really lose, lose any of it,”  he says. Calling Wisconsin the “center of the universe,” he adds, “Right now I like our chances.”

The April 7 election was “a bright red alert for Trump in Wisconsin,” Wikler says and points to GOP “slippage” in areas that have been traditional Republican strongholds.

Together with the polling commissioned by Protect Our Care, that could be an indication of softening support for Trump in Wisconsin.

Wikler claims he saw “a marked shift,” in the recent election. “There were thousands and thousands of voters in places that used to be ultra deep red, that were moving in a purple direction. And I can only speculate that that comes from a real crisis in our state that was horrific even before coronavirus hit and now is reaching catastrophic proportions.”

“There’s a sense that Trump fundamentally is not working out for rural voters in Wisconsin,” Wikler adds.

It’s a long time until November, and no one knows how the pandemic and its terrible economic fallout will affect politics in the long run.

What happens between now and next fall is still an open question.