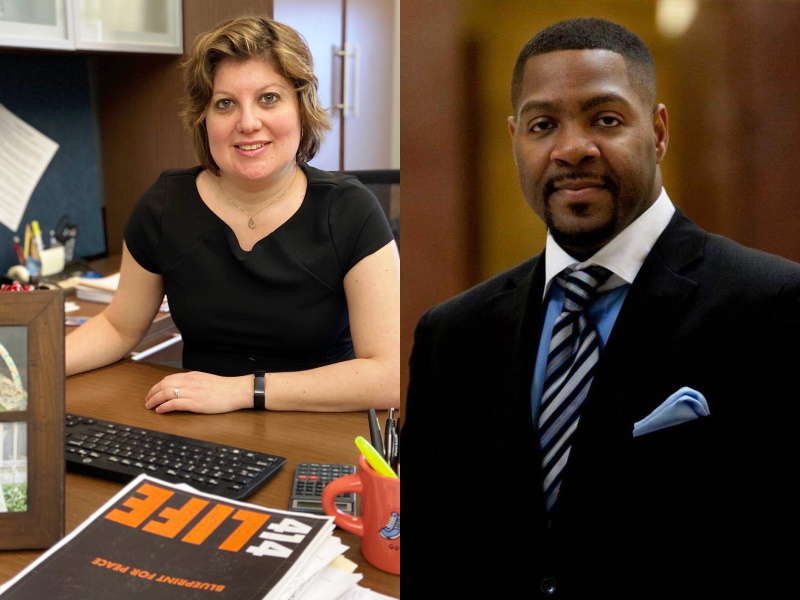 The race for the open position of City of Milwaukee Comptroller is turning into a nasty one, with Deputy Comptroller Aycha Sawa claiming her opponent, state Rep. Jason Fields, is conducting a “Chicago-style political campaign” against her, partly funded by Leaders for a Better Community (LBC), a  501(c)(4) corporation that she calls a “Dark Money group.”

Fields, for his part, says, “These attacks have come from an outside group not associated with our campaign.”

At issue was an attention-getting mailer sent to city voters by LBC that read:

Those who search for a villain in the issue of century-old lead water service lines and the risk they pose to the public health might be surprised to find the Deputy Comptroller in the role. It certainly surprised Sawa, who responded with a page on her campaign website on March 17th entitled “The TRUTH About Milwaukee’s Lead Audits” in which she responded:

Recently a Chicago-style political campaign launched this week by my opponent’s supporters who wish to remain in the shadows. Their claim, that the comptroller’s office, or more specifically me as your Deputy Comptroller would block a lead audit is a blatant, manipulative lie. … There are two audits/reviews related to the lead concern that were conducted.

Sawa added, “the Comptroller and the Deputy Comptroller cannot block or assign any audit done by the internal audit division. … The criminal investigation refers to the investigation of the health department due to mismanagement and cover up, it has nothing to do with the comptroller’s office. … There are four references referred to in the ad under check the facts. The first one is Aycha’s qualifications.  The second one refers to a radio spot about the risks of lead to children. The third one refers to the debacle in the health department. The fourth one refers to a 2013 peer audit of the internal audit department.  None of these references indicate that Aycha blocked any audit.

Sawa also said the mailer gave an incorrect phone number for her office, and “Leaders for a Better Community asks you to go to their website to find more information about their plan for transparency and accountability, however, there is no plan on their website.” 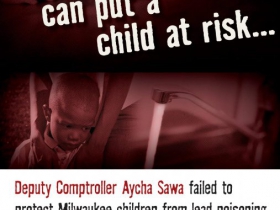 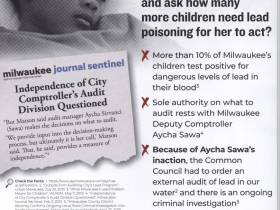 What is Leaders for a Better Community? 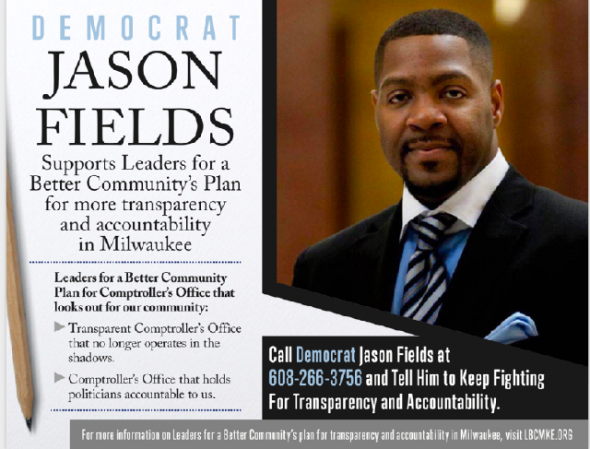 Leaders for a Better Community is run by Sherwin Hughes, a former chairman of the State of Wisconsin Elections Board under Governor Jim Doyle. Hughes served as Field Director for Rep. Tom Barrett for nine months in 2002, and was Communications Director for Sen. Lena Taylor for ten months in 2008-2009. Barrett, now seeking his fourth term as Milwaukee mayor, is opposed by Taylor. From 2012 to 2019 Hughes hosted “The Forum,” a radio show broadcast on WNOV before moving in 2018 to WRRD. His LinkedIn page lists his specialties as “Political Consulting, campaign management, government relations, public contract administration, coalition building, strategic planning, organizational outreach, fundraising, media consulting.” As a 501(c)(4) organization, Leaders for a Better Community, is considered a “Social Welfare” organization, and need not identify its donors, unlike a PAC or political campaign. It can be involved in advocacy and lobbying activities.

An Instagram post by LBC features a photograph of Fields and the statement that “Democrat Jason Fields supports Leaders for a Better Community’s plan for more transparency and accountability in Milwaukee. Politicians look out for themselves and their friends, not for us and our community.” As noted by Sawa, the LBC “plan for more transparency and accountability” could not be found on the group’s website.

Fields says “while the issues on the mailers are serious, we’ve had no part or say in their messaging or delivery, and that needs to be made quite clear.” However, his campaign website lists the the lead crisis as his first issue. Using language quite similar to that found in the mailers sent by LBC, he writes:

Fixing Our Finances and Solving the Lead Pipe Crisis
The current Comptroller and his office refused to audit lead abatement programs for three years, and because of their inaction the Common Council had to act on its own and order an external audit. This is unacceptable by any standard. As Comptroller, I will use the authority of the office to be proactive and solve the lead pipe crisis across Milwaukee to protect our children from further poisoning.

According to Sawa: “This appears to be coincidentally close to the wording used in the second attack ad. It is a lie.”

In a message to Urban Milwaukee, Fields writes: “I’m not a fan of attack-politics. I like to focus on the issues that matter the most and my background in public service to let voters have an informed choice about who is best to lead our city.”

According to a message to Urban Milwaukee from Sawa: “Jason [Fields] has had a long relationship with both Sherwin Hughes and Chris Abele. Chris Abele has contributed multiple times to Jason’s campaigns, including $6,000 to his Comptroller campaign. Abele has donated millions of dollars to Leadership MKE.“

The group lists three candidates it supports in the spring election, including David Crowley, who is running against Sen. Chris Larson to succeed Abele as Milwaukee County Executive, Tearman Spencer, who is running for City Attorney against incumbent Grant Langley, and Fields in his run for Comptroller.

Sawa is a Certified Public Accountant and Certified Internal Auditor with a 2006 Accounting Bachelors of Business Administration degree from UW-Madison, while Fields, who holds a 2014 Bachelor of Science degree from Cardinal Stritch University is not. He is a formerly licensed broker and insurance agent. Sawa minces no words in pointing out the superiority of her credentials, and in the role of Abele in the campaign:

Both Chris Abele and Jason Fields are hypocrites. Chris pushed for legislation to require the County Comptroller to need a CPA11 (and to create the comptroller role) and Jason Fields agreed and voted for it in the State Legislature in Madison. …  Jason cannot meet those same requirements, yet he wants to be Comptroller of the City (whose budget is larger than the county) and Chris is supporting him.  Disappointing hypocrisy.

Partisan Politics in a non-Partisan Campaign

Although City of Milwaukee officials run in non-partisan Spring elections, most city officials have ties to the Democratic party. Sawa claims she is the real Democrat in this race:

Jason’s a DINO (Democrat In Name Only). Jason is not a Democrat. Jason supported voucher schools, FoxConn, and the payday loan industry. He has voted against funding for lead poisoning (as part of the budget). Jason received funds from the Walton (Wal-Mart) family, disgraced Republican Scott Jensen, Ralph & Mary Lou La Macchia. He has been supported by dark money groups such as Leaders for a Better Community and American Federation for Children. Jason Fields did not sign the Scott Walker recall election and was the only democrat that did not propose an amendment to Act 10.

Both candidates are working under the hardships imposed by the COVID-19 pandemic. “Doing doors,” a traditional duty of a candidate, is not allowed in the era of Social Isolation.  And, “voting at the polls,” the traditional way of conducting an election, will likely be eclipsed April 7th by mail-in votes. As Fields says: “I look forward to continuing to earn the trust of voters across our city and encourage Milwaukee residents to vote absentee by mail before the April 7th election.”