The Amazing Legacy of Les Paul

Incredible innovator teamed with Mary Ford on songs like “The World Is Waiting For The Sunrise.” 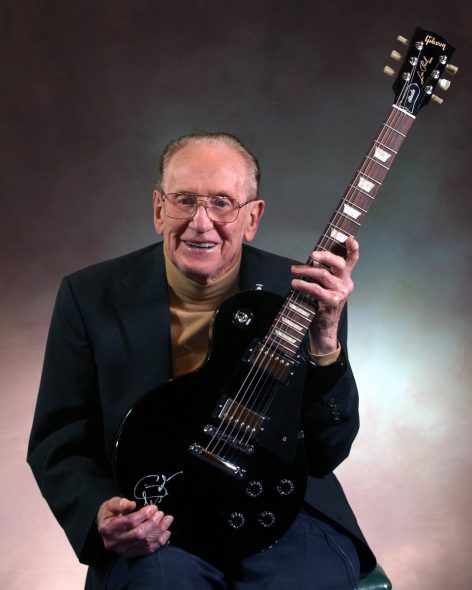 I’m making my way through one of those old fashioned carbon-based books. This is a change of direction away from my nightly appointment with either a Kindle or a Kindle App. They both have their pluses, but when a friend laid a good book on me: The Birth Of Loud by Ian S. Port, I decided to revisit the wonder of ink and paper. The book tells the story of two geniuses, Les Paul and Leo Fender, kind of the Steve Jobs and Bill Gates of their day, at least as it applies to that ultra-modern technology, solid body electric guitars.

Les Paul strikes me as the Steve Jobs of his era. Consider how many things he was great at: Had he not been the first to experiment with solid body electrics in the early 40’s, he would still be a legend for his wild flights of fancy on guitar. Had he limited himself to sound engineering only, he would still be remembered as the inventor of both tape echo and multi-track recording.

Yes, but then again… Leo Fender is the one who made the kind of guitars Jobs might have dreamed up, especially the sleek multi-colored Stratocaster. With its sexy contoured body that, when you think about it, solved ergonomic problems that weren’t really all that pressing, his guitars were light and affordable with a sharp twang that was instantly identifiable. The colors were bright, more like cars than guitars. Favored at first by country pickers, they were soon scooped up by blues artists and surf-rockers. Let’s call it a draw.

The book goes back and forth between the two men and peeps into Les Paul’s relationship with his wife, Mary Ford. She was a gifted pop singer who did the flawless harmonies on their records — thanks to Les’s early multi-tracking innovations. Those records, with multiple Marys and Les racing from one end of the neck to the other were hard to resist. So give Les credit for inventing ear candy too!

Mary was no slouch on guitar either, in this clip, she shadows Les through a song, playing every lick he does. It’s a very funny bit, just as playful as their lives together weren’t. Les was a manic workaholic and he drove Mary relentlessly, waking her to record in the middle of the night and touring endlessly. She took to drinking and… well, it’s all in the book and I’d rather not play spoiler. In his defense, he probably couldn’t be anyone else and probably should have stayed a bachelor.

While the partnership lasted they sold millions of records, had their own TV show and sold out theaters across the country and abroad. They even invited America into their home which, as you might have suspected, was basically a sound stage with a stove and fridge. In this video from their TV show, they perform a song that won’t leave me alone, “The World Is Waiting For The Sunrise.”

It starts with a corny encounter on their patio marked by the kind of strained banter that sounds written. When Mary suggests singing this song the fun really begins. It’s the effortlessness of both of them that kills me. Of course it’s television and the sound is augmented, probably by her sister and brother-in-law backstage, and possibly a prerecorded track. But I’ve seen more than a few live Les clips. (I also got a pretty good look when I wound up on stage singing a couple songs with Les at his weekly gig at Iridium in Manhattan — but that’s another story.) He played at impossibly fast tempos and made it look like child’s play.

Mary had a different kind of ease, no less charming, with a voice so smooth you could drink it. She may have been unhappy, but her smile has me fooled. In an age where sweat and effort rule, a couple cool customers like this might be worth emulating.

Back to the song, which drifted back into my memory while reading the book. It’s an octogenarian, written by Gene Lockhart and Eric Seitz, a classical pianist. Lockhart, the lyricist, must not have been in an overly ambitious mood — here are all the words he could muster:

The verse is repeated without change. Subtract the redundant third line and you have a total of 23 unique words. Maybe he sensed something easy and uplifting was just the thing for a world recovering from a devastating war. The song went on to be cut by everyone under the sun. Django Rheinhardt’s version is the one I would assume inspired Les — he was the two-fingered Gypsy master’s biggest fan. 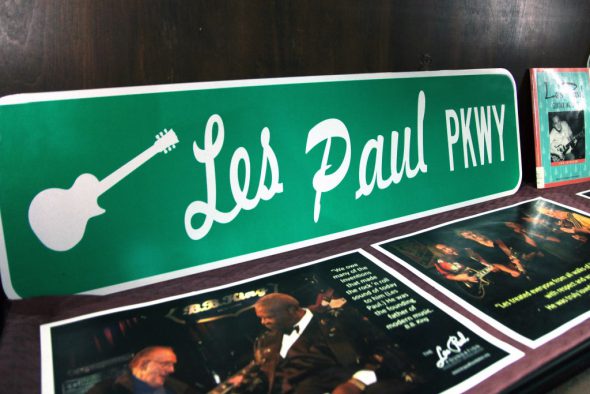 Out in Waukesha, they’ve named a street (or should I say parkway?) after Les Paul. If you’ve seen the anonymous looking stretch you have to wonder if he’d take it as a compliment. So how about a Gene Wilder Boulevard or Liberace Lane, Milwaukee? Are we that in love with numbers here?

We live in Les’s world now. Whether you like it or not, pop music is almost always multi-tracked and effected. Cavernous echo buries lesser players and allows them to sound grander than they are. Les and Mary, who were truly larger than life, achieved their fame by attending to all the little details of their craft. You could have pulled back the curtain of electronic inventiveness and still be dazzled by their talent. That’s my litmus test, one they pass with flying colors.

And for more about the Wizard of Waukesha, check our story about an exhibit on him.