By Danielle Kaeding, Wisconsin Public Radio - Feb 11th, 2020 11:40 am
Get a daily rundown of the top stories on Urban Milwaukee 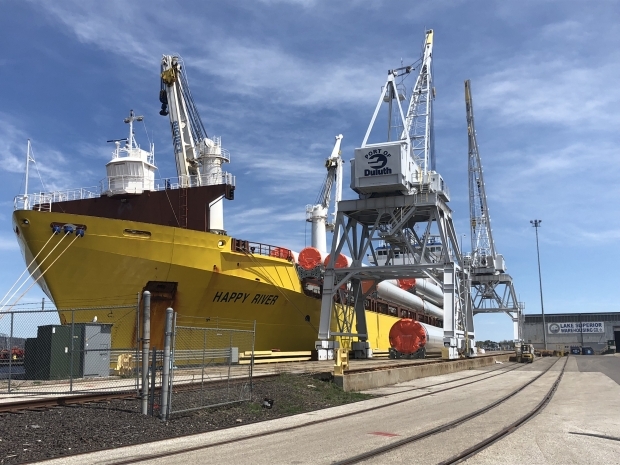 The Happy River carries wind turbine components to the Twin Ports. Duluth-Superior saw a record amount of wind cargo while coal dropped to its lowest level in more than three decades. Photo by Danielle Kaeding/WPR.

A record amount of cargo containing components used for generating wind power moved through the Twin Ports during the 2019 shipping season. The surge in wind traffic comes as Duluth-Superior handled the lowest amount of coal in more than three decades.

Around 8 million tons of coal moved through the Twin Ports last year, marking the lowest volume Duluth-Superior has seen since 1985. Jayson Hron, spokesperson for the Duluth Seaway Port Authority, said the decline comes as demand for renewable energy sent a record 306,000 freight tons of wind turbines and other components through the port.

“It’s becoming more competitive in the power generation price spectrum, and so it’s just making it a more viable, higher demand way of producing energy and power for our country,” said Hron.

The cost of renewables like wind and solar have declined in recent years. In addition, natural gas prices are lower than coal as production has reached near record levels, according to the U.S. Energy Information Administration. The agency found utility providers have announced retirement of more than 546 coal-fired plants in the last decade that produce around 102,000 megawatts of power.

The transition is something people would not have thought possible until recently, said Greg Nemet, a public affairs professor at the University of Wisconsin-Madison who researches energy and policy.

“We’re seeing plants that were built in the ’80s — some even in later — that are being prematurely shut down just because it’s much cheaper to make electricity with natural gas and with solar, even when you have to build new plants,” said Nemet.

Most recently, Dairyland Power Cooperative announced it’s planning to retire a 345-megawatt coal plant in Genoa next year. The company’s CEO Barbara Nick cited the inefficiency of the facility and regulators’ approval of plans to build the $700 million Nemadji Trail Energy Center in Superior. The natural gas plant is a joint project with Duluth-based Minnesota Power, and the two providers have said the facility will help them meet renewable energy goals.

Coal production in the United States has decreased from 1.2 billion tons in 2008 to a projected 597 million tons for the coming year. The decline has caused the coal mining workforce to drop more than 40 percent.

Power companies are transitioning away from fossil fuels for economic reasons and to appease investors and states that have set renewable energy goals. In the last year, Wisconsin Gov. Tony Evers, a Democrat, pledged to provide 100 percent carbon-free electricity by 2050.

At the same time, the Trump administration has been attempting to help the ailing coal industry. Last year, the U.S. Environmental Protection Agency rolled back efforts from the Obama administration to limit emissions from coal-polluting plants.

Last week, the U.S. Department of Energy also announced up to $64 million in federal money for projects that would create cleaner coal technologies. Although, the agency is providing roughly double that amount for advancement of solar energy projects.

The U.S. Energy Information Administration projects coal will produce less than a quarter of the world’s electricity by 2050 while renewable energy sources are expected to grow more than 20 percent during the same time span.