Will go to governor for signature. Five other bills passed need Senate approval.

By Laurel White, Wisconsin Public Radio - Jan 22nd, 2020 10:38 am
Get a daily rundown of the top stories on Urban Milwaukee 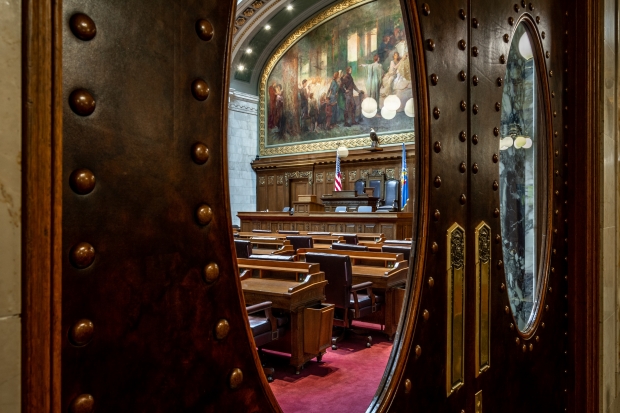 The measure aimed at improving groundwater quality would ban, in most cases, the use of firefighting foam containing chemicals known as PFAS. Exposure to PFAS, also known as “forever chemicals,” has been linked to a number of adverse health effects. The chemicals have contaminated groundwater across Wisconsin.

The bill passed the Assembly on a unanimous voice vote. The Senate also voted to approve the plan on Tuesday. It now moves to Gov. Tony Evers’ desk for his signature.

A number of groups support the bill, including the League of Wisconsin Municipalities, Wisconsin Manufacturers and Commerce, and Professional Fire Fighters of Wisconsin.

However, Democrats have said the proposal doesn’t go far enough.

One of the sponsors of the GOP-backed bill, Rep. John Nygren, R-Marinette, said the Democrats’ plan “goes considerably farther” than the plan up for a vote Tuesday. He argued Democrats’ measure includes regulations on chemicals that haven’t been adequately researched.

“At the end of the day, I want something that’s going to pass,” Nygren said.

He added the issue of PFAS contamination of ground and surface water “is probably the most significant issue we deal with every day in my office.”

“If this bill had been in place 50 years ago, we wouldn’t be in the place we are in Marinette,” he said.

The state Department of Natural Resources has said it considers the largest source of contamination in the Marinette area to have come from firefighting foam used at Tyco Fire Products’ fire training facility.

The Assembly also voted to approve a bill that would increase penalties on individuals who assault nurses in Wisconsin.

The bill passed the Assembly on a unanimous voice vote. It has already passed the Senate and now moves to Evers’ desk for his signature.

Under current law, anyone found guilty of intentionally hurting a nurse is charged with a Class A misdemeanor. Penalties for that crime are a fine of up to $10,000 or up to nine months in jail.

The proposed change would elevate the crime to a Class H felony, which is punishable by a fine of up to $10,000 and up to six years in prison.

The state already extends that elevated penalty to individuals in certain professions, including firefighters and jurors.

“Nurses should not be afraid to go to work,” said Rep. Gae Magnafici, R-Dresser, one of the bill’s sponsors. “The public must know that the state stands behind its nurses.”

Magnafici worked as a registered nurse for more than 30 years. She said instances of violence can be spurred by a patient under the influence of drugs or alcohol or family members experiencing trauma or conflict.

Several groups, including the Wisconsin Nurses Association, support the proposal.

However, Democrats argued there should be exceptions made in the measure for individuals with traumatic brain injuries, developmental disabilities, dementia or mental illness.

“Let’s not make this a felony to hurt those people more than they’re already hurting,” said Rep. Dianne Hesselbein, D-Middleton.

Republicans countered the penalty would only be levied against individuals who knowingly commit the crime.

Lawmakers also took up several bills related to opioids in Wisconsin. The measures are part of the HOPE Agenda, sponsored by Nygren. Nygren began rolling out HOPE Agenda proposals in 2013. The effort has led to more than two dozen new state laws.

One bill up for an Assembly vote Tuesday would expand BadgerCare coverage for acupuncture as an alternative to opioids for pain management. The bill passed on a 97-1 vote.

Another plan would expand BadgerCare coverage for peer recovery coaches, who provide support to individuals in treatment and recovery. The bill passed on a unanimous voice vote.

A third bill would mandate that state employees could not be penalized for undergoing medication-assisted treatment for addiction. Those treatments involve substances like methadone and buprenorphine, which can be controversial because of their potential for abuse. The bill passed on a unanimous voice vote.

None of the HOPE bills up for votes Tuesday have been approved yet by the Senate.

Other Bills Voted On

The Assembly also acted on proposals Tuesday that would: