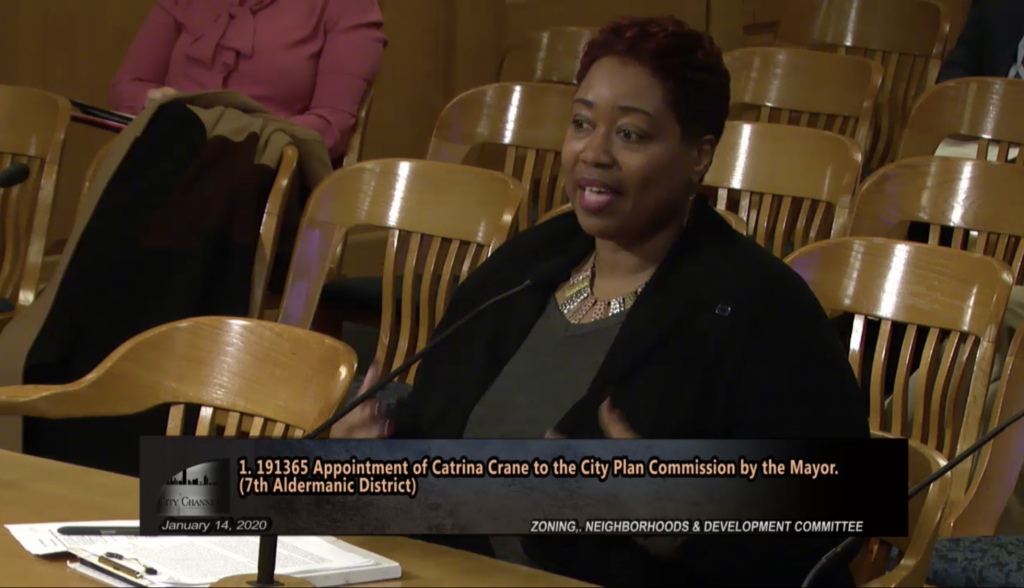 Economic development veteran Catrina Crane will be the newest member of the City Plan Commission.

“I’m really excited and honored for the opportunity to serve on the City Plan Commission,” Crane told the council’s Zoning, Neighborhoods & Development Committee last week. “I have always had this devoted love for economic development.”

Crane, a self-described “weird kid,” said she grew up watching Channel 25, the city’s public access station, on which she’ll now appear monthly. She grew up near the then-Capitol Court shopping center and still lives near what is now Midtown Center.

She has worked at Menomonee Valley Partners as the director of workforce and business solutions since July 2006. “It was an opportunity to rebuild a city within a city,” said Crane of work on the redevelopment of the former railroad yard. According to a resume submitted to the city, she was also an instructor at Bryant and Stratton College from 2004 through 2011. From 2004 to 2006 she served as a consultant to the Department of City Development on a federal Healthy Homes grant.

Crane is a graduate of LISC Milwaukee’s Associates in Commercial Real Estate program designed to train minorities and women for careers in real estate in partnership with local universities.

The Plan Commission performs design and zoning review for real estate development proposals that require zoning changes, including changes to the city’s zoning ordinances, street vacations and proposed city land sales. Its actions on those matters are advisory to the Common Council. It has final say over 43 overlay zone districts that have additional design criteria.

Crane replaces veteran Patricia Najera who is stepping down after 20 years on the commission. Mayor Tom Barrett will also need to nominate a replacement for commissioner Whitney Gould who passed away in December. The council issued a condolence in honor of Gould during its meeting Tuesday.

Crane ran unsuccessfully for a seat on the Milwaukee Public Schools Board of Directors in early 2019, losing to Milwaukee County Board of Supervisors member Sequanna Taylor who now holds both posts. Crane serves on the board of the Washington High School Alumni Foundation and her daughter attends an MPS school.