Republican plan to ban it far too narrow in scope, Democrats argue.

By Danielle Kaeding, Wisconsin Public Radio - Jan 9th, 2020 12:24 pm
Get a daily rundown of the top stories on Urban Milwaukee 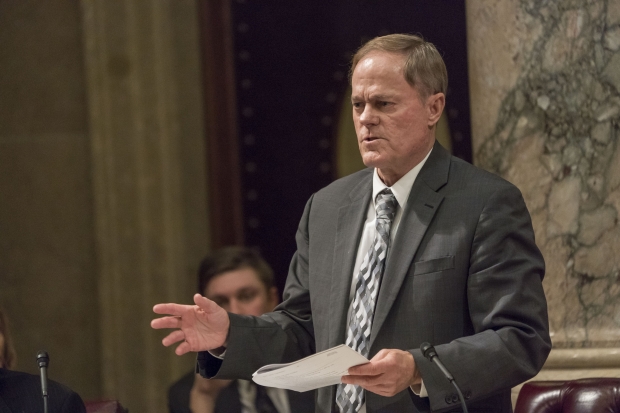 A Senate committee advanced a Republican bill by a 3-2 party line vote that would ban the use of firefighting foam that contains chemicals known as PFAS in most cases. Democratic lawmakers objected, saying the bill doesn’t go far enough to protect the public.

Perfluoroalkyl and polyfluoroalkyl substances, commonly referred to as PFAS, are chemicals that are found in products ranging from firefighting foam to nonstick cookware. The chemicals have raised concerns because they don’t break down easily in the environment, and research has linked the substances to thyroid disease, decreased fertility in women and cancer.

Sen. Robert Cowles, R-Green Bay, introduced the bill banning PFAS-containing firefighting foam last year. Under the legislation, such foam would be allowed during an emergency or testing under specific conditions.

“The bill as amended creates … the necessary balance, I should say, between reducing dangers to human health and negative environmental footprint these chemicals pose while also preserving the ability of first responders to use an extremely effective tool to fight flammable liquid fires,” Cowles said.

The bill includes changes that would ensure rules for testing that include preventing discharges to the environment, as well as preventing treatment or discharge to a wastewater treatment plant.

The legislation is backed by industry, local governments and first responders. The Wisconsin Department of Natural Resources also supports efforts to limit the use of PFAS-containing firefighting foam.

However, Democratic lawmakers on the committee — including Sen. Dave Hansen, of Green Bay, and Sen. Mark Miller, of Monona — say the bill falls short in addressing the risks of PFAS contamination.

“I do not think that the bill before us, even with the amendments that you outlined, come anywhere close to being able to protect the health and safety of our citizens,” Miller said.

Both Miller and Hansen argued the bill should be combined with another introduced by Democrats known as the CLEAR Act. That legislation would expand the list of PFAS chemicals the DNR would monitor, as well as require any PFAS groundwater standard recommended by the Wisconsin Department of Health Services to be used as an interim standard.

State health officials have recommended a groundwater protection standard of 20 parts per trillion for two of the most common chemicals, PFOA and PFOS. The DNR has just begun the rulemaking process to develop groundwater, drinking and surface water standards, which could take more than two years.

The Democrats’ bill would also provide additional funding and positions to the DNR and DHS to carry out work authorized under the legislation. It hasn’t received a public hearing since its introduction.

A Wisconsin Legislative Council memo requested by Cowles found the Democrats’ legislation expands, modifies and at times overlaps with the authority already granted to state agencies.

“I do think your bill is reaching out beyond the science that’s available right now,” Cowles said.

Hansen noted citizens he represents in Marinette and Peshtigo can’t afford to wait for further action to address risks associated with the chemical. The communities are dealing with PFAS contamination stemming from the use of firefighting foam at Tyco Fire Products fire training facility.

Cowles said he remained committed to working with the two lawmakers on legislation to address PFAS contamination in the area in future legislative sessions.