By Isiah Holmes, Wisconsin Examiner - Dec 4th, 2019 04:06 pm
Get a daily rundown of the top stories on Urban Milwaukee 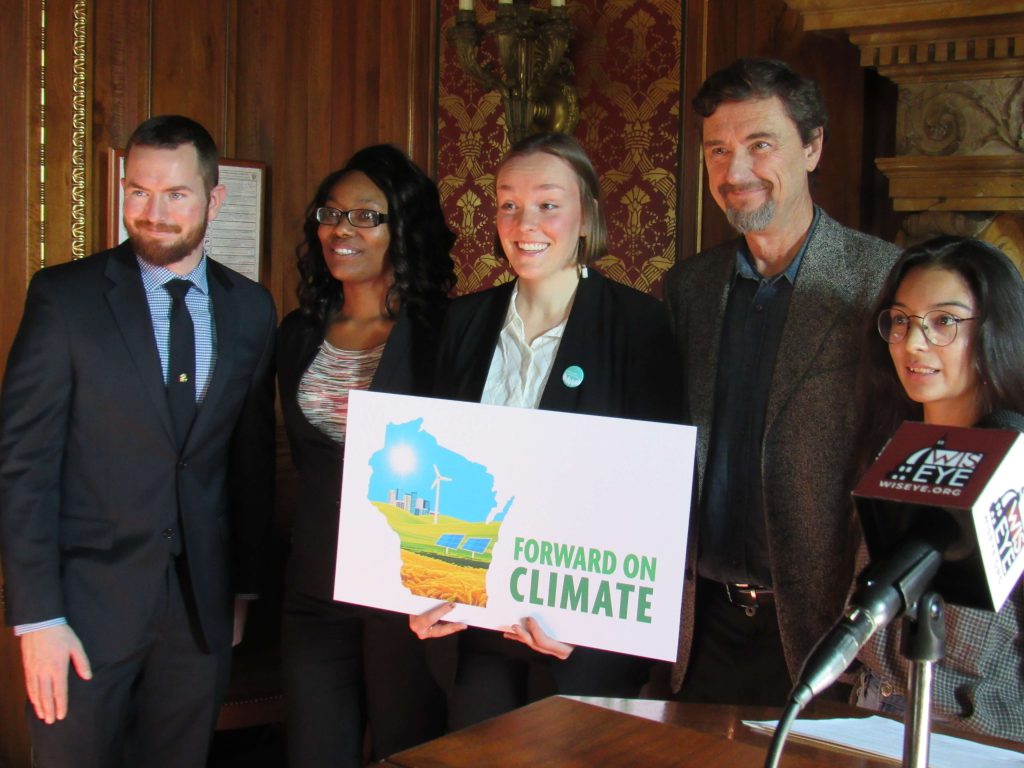 Joining the bill’s sponsors in the Capitol to announce the measures were several community members and co-sponsors of the package. 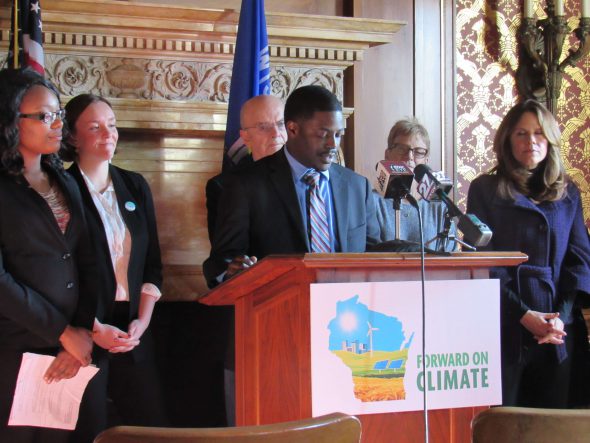 “Everyone in this room knows that climate change is real,” said Rep. David Crowley (D- Milwaukee), who joined his Democratic colleagues in announcing the bill package, “and that it qualifies now as an emergency and requires our immediate attention.” Having support among their collective, however, isn’t enough. “If only we could convince everyone in this building,” he continued, invoking his colleagues in the GOP. Crowley and company were also joined by Rep. Chris Taylor (D- Madison), and Rep. Shelia Stubbs (D- Madison).

“Dealing with the effects of climate change is our moral duty as lawmakers,” declared Crowley. “This package will help Wisconsinites now, and all Wisconsinites to come. I call on my colleagues across the aisle to recognize the emergency that we’re in right now. And to take action right now.” The package is broken up into four bills, focusing on distinct areas of concern for climate adaptation and mitigation.

Another measure  would order the Department of Administration (DOA) to contract with consulting entities to study and develop a “green bank” system for Wisconsin. “Green banks are specialized public financial entities that partner with the private sector to fund infrastructure projects yielding sustainable and energy efficient projects,” a summary of the legislation explains. “These public-private partnerships typically help to finance commercially viable clean energy technologies that would otherwise face barriers to attracting capital.”

A green bank would serve as a financial liaison and backbone for the restructuring of Wisconsin’s infrastructure. These unique institutions have been established in five U.S. regions including Connecticut, New York state, Rhode Island, Hawaii, Maryland and California.

Another measure would create a separate grant program under the Department of Agriculture for farmers who use sustainable practices. “Wisconsin’s farmers are facing additional pressure due to the rapid increase in extreme weather events exacerbated by climate change, including flooding, extreme heat, polar vortexes, and bomb cyclones,” the bill states. “By planting and maintaining certain types of vegetation, utilizing no or low-till farming practices, and changing grazing practices, our farmers can remove carbon dioxide from our atmosphere and sequester it in the ground.”.

The last bill in the package would require the Wisconsin Public Service Commission to consider the social costs of carbon in any analysis done during the approval process for construction projects, new infrastructure developments, and utility-scale energy facilities. “By carefully accounting for the impact and damages caused by carbon pollution, we can better estimate the cost and value of new utility-scale energy proposals to Wisconsin energy customers,” it states.

Supporters of the Forward On Climate package know they face  an uphill battle. “I think that people on both sides of the aisle are seeing the facts, and they are also seeing the polls,” Neubauer told Wisconsin Examiner. “They know that the public believes that climate change is happening …  and wants them to take action.”

Neubauer says that although there is still resistance and denial from the GOP leadership, it’s only a matter of time before her Republican colleagues   join others seeking climate reforms. Neubauer, who holds a place on the state’s climate task force, said she expects bipartisan support will come, “when it means lower rates for their energy consumers, when it means good jobs, investments in rural communities. And I just hope that happens sooner rather than later.”

Stephanie Solgado, an immigrant from Honduras who spoke during the bill announcement, is keenly aware of the time crunch. “I personally think that climate issues relate to race and immigration issues because it’s all linked,” said Solgado. “With developing nations like Honduras, El Salvado, Nicaragua, we’re all connected to colonialism from the United States. They came in, took our resources, and are continuing to pollute because of lower regulations.”

These issues contribute  to migration. “Of course people are trying to leave the country,” Solgado told Wisconsin Examiner, “It really is a big issue and all relates back to climate change.”

Solgado pointed to eroding soil, deforestation and dangerous industries like mining as just a few issues afflicting her country. “Farmers are being underpaid from American buyers,” she explained, “everything from coffee, bananas, all those kinds of products. And at the same time, the United States is coming in with less regulations and bigger work forces.” Although Hondurans work the fields, much of the profit from their labor flows outside of their country. Solgado feels that these dynamics fuel increasing desperation, poverty, violence, and migration from her home country.

Stubbs, a co-author of the green bank bill, applauded the wide net the bills cast. Stubbs, like Neubauer, hopes the GOP joins in addressing these pressing matters.

“All 99 of us are sent here to work on behalf of the entire state, we represent our districts. And I think that we need to keep our priorities together,” Stubbs told Wisconsin Examiner. “ Climate change is real. Whether we like it or not, Mother Nature is changing. We can’t deny that. I think that what it comes down to is doing what’s right for your district, and doing what’s right for the state.”

“I’m hopeful that maybe at least one of our colleagues on the Republican side would join us in this work,” Stubbs added. “Because it impacts all of us in the state. That’s our hope.”

“I know that a number of Republicans believe and know that climate change is happening,” Neubauer said. “And I think that the roadblock is just getting the legislation to committee.” It’s for that reason that she encourages residents of rural Wisconsin to contact their local legislators, and share their concerns for climate-resistant infrastructure, and perhaps even bringing sustainable jobs to struggling districts.