By Isiah Holmes, Wisconsin Examiner - Nov 13th, 2019 12:06 pm
Get a daily rundown of the top stories on Urban Milwaukee 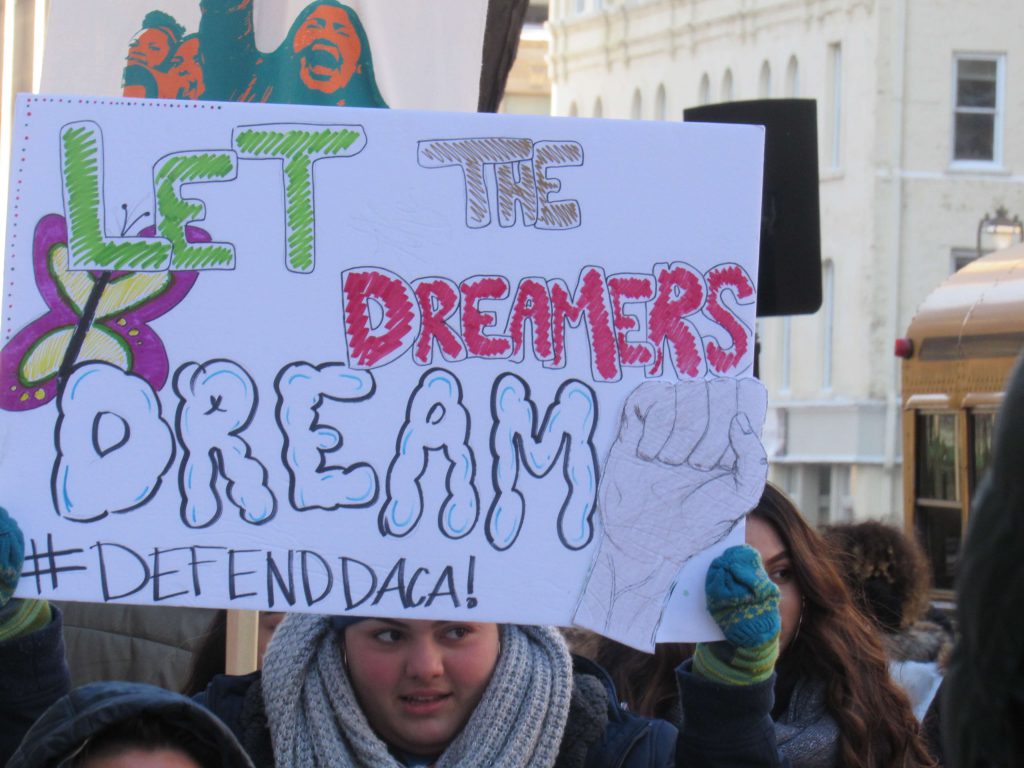 Bus loads of activists and supporters, including dozens of high school students, congregated in front of Milwaukee’s Federal Building Tuesday morning, calling on the government to protect the Deferred Action for Childhood Arrivals (DACA) program. Voces de la Frontera spearheaded the event, which was part of a national day of action on the day the U.S. Supreme Court began hearing oral arguments on three lawsuits brought against the Trump administration push to end DACA.

DACA is a federal program created during the Obama administration which allows individuals who were undocumented children when they entered the country to continue to live, work and seek education in the United States. Often called “Dreamers,” DACA recipients are given a renewable, two-year period of “deferred action,” during which time they’re protected from deportation. Supporters also filled the state Capitol rotunda in Madison and gathered elsewhere in Wisconsin in support of Dreamers as well. Speakers at the rally said there are around 8,000 DACA recipients in Wisconsin, although official numbers often cited are a bit lower, and 800,000 Dreamers nationwide.

As of July 17, 2019, the U.S. Citizenship and Immigration Service (USCIS) stopped accepting new requests for DACA protection, though it will still renew protections for individuals who currently have DACA status. The agency’s website states, that “due to federal court orders on Jan. 9, 2018 and Feb. 13, 2018, USCIS has resumed accepting requests to renew a grant of deferred action under DACA.”

A Supreme Court under President Donald Trump’s  appears unlikely to renew the program. If the program goes, and even if recipients are not subjected to immediate deportation, Dreamers will live in a state of unease. Obtaining authorization to work or seek education while they remain in the country could also become more difficult. 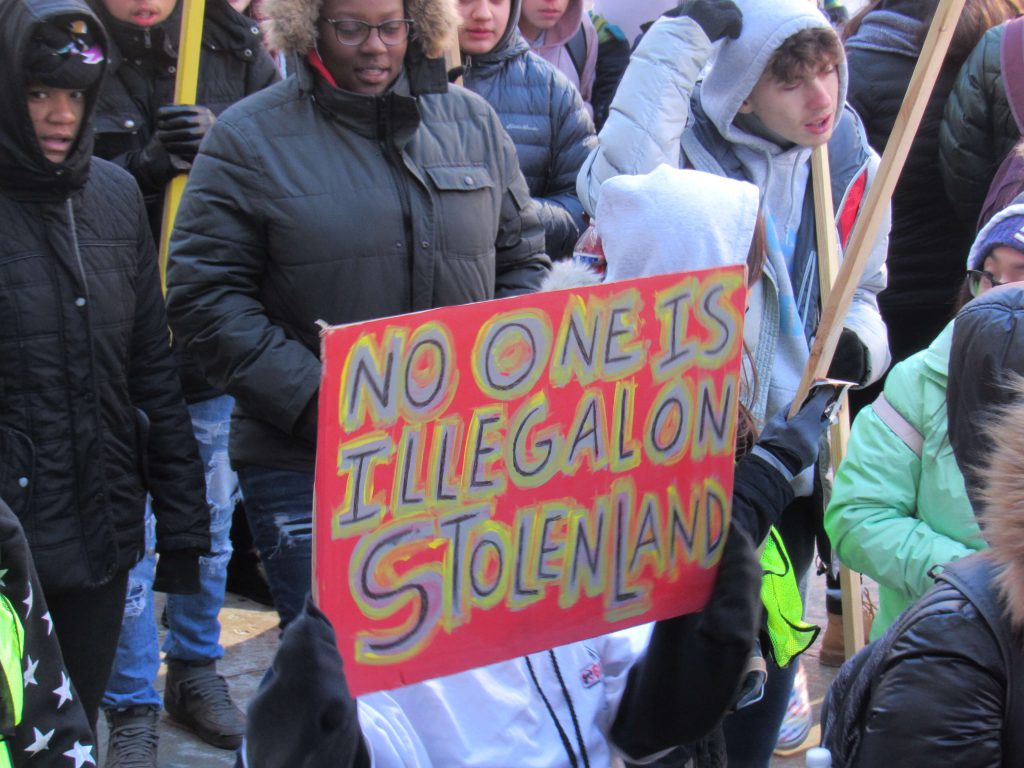 Lead youth organizer with Youth Empowered in the Struggle and DACA recipient Alejandra Gonzalez said the current climate for immigrant families is “scary” and “traumatizing.”

“I took this job on to advocate for these students, and keeping that strong front for them has been difficult,” Gonzalez told Wisconsin Examiner. “We need to keep advocating and fighting for ourselves. We hear these stories, and we hear these headlines, but it doesn’t mean that we need to stop.” The young organizer, who lives in Milwaukee, says “We can’t lobby the Supreme Court but we can definitely make our voices heard. It’s important to protect Dreamers.”

“DACA is amazing, and it’s opened up so many opportunities for me,” Gonzalez said. “But what I would like to see is a permanent solution for folks. I’d like to be able to become a citizen in this country because I consider myself as a part of this country.” 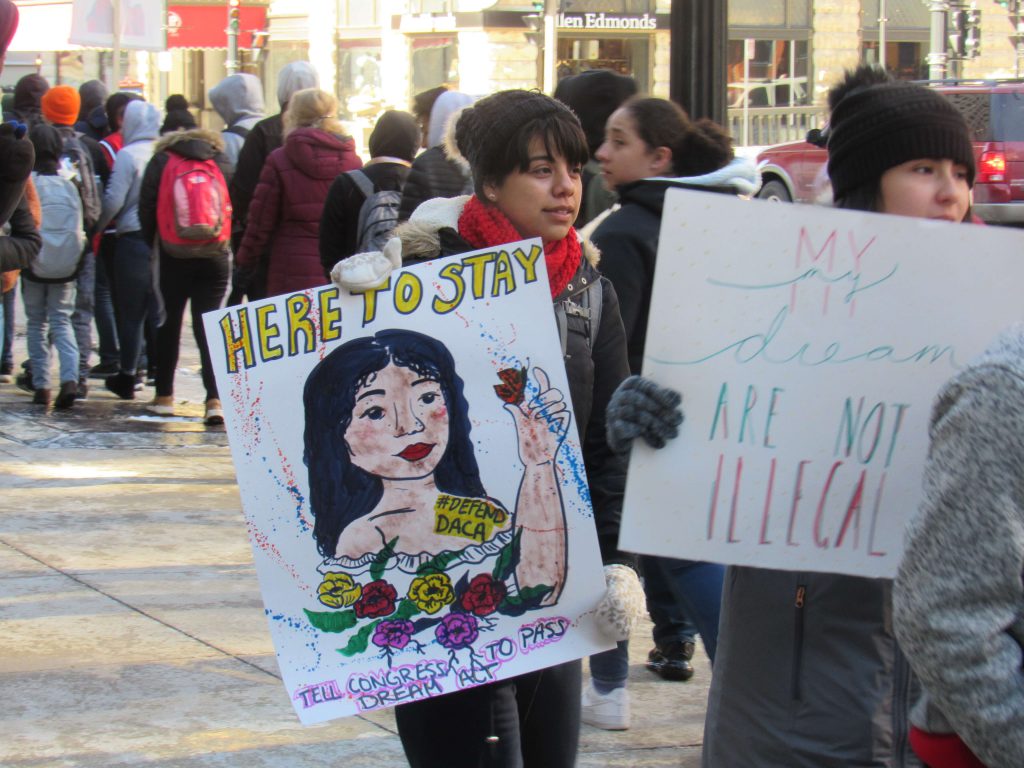 Sixteen-year-old Cassandra Casas told Wisconsin Examiner, “We’re fighting for our families.” Seven years ago, Casas’ mother accepted voluntary deportation back to Mexico. “I know she can’t be here, but we stand in solidarity with all immigrants,” says Casas, a Milwaukee resident and student at Ronald Reagan High School. She says that two of her siblings live with her mother, and she hasn’t seen them since her mother was deported.

Both Casas and Gonzalez have seen how polarizing the immigration issue can be in Milwaukee. “For Milwaukee, I think it’s a very divided place in all political aspects,” said Casas. Due to her school’s large Hispanic student population, however, “We get a lot of support with rallies and stuff. But there are definitely people who don’t support us,” she said.

Gonzalez added, “I wish I could feel a little more protected by the Milwaukee Police Department (MPD), to be honest. The fact that the Fire and Police Commission hasn’t said something in policy that would prevent ICE from collaborating with MPD really does scare me. Because, if DACA is removed, I could potentially be deported. Right now I’m a taxpayer, I don’t want my tax money to go towards my own deportation! It’s really scary to know that we’re not supported in that way.”

Voces de la Frontera Executive Director Christine Neumann-Ortiz applauded the student activists and their teachers for their courage. “Our fight means you take risks. You don’t win anything without taking risks, and that takes courage! And it takes unity!”

Neumann-Ortiz also put elected officials on notice that Voces de la Frontera will be organizing to increase the youth and immigrant vote. “I’m going to tell you right now, the youth vote is critical,” she said. She went on to reference the decline in youth and minority voting in 2016. “That’s how [Donald Trump] won Wisconsin. But we’re not going to let that happen! We elected a pro-immigrant governor in 2018 and we’re going to elect a pro-immigrant Congress and a pro-immigrant president in 2020. And Wisconsin is going to [expletive] deliver it!”

Neumann-Ortiz wrapped up by leading the crowd in a chant: “Hey hey, ho ho, Donald Trump has got to go!”