By Erik Gunn, Wisconsin Examiner - Nov 5th, 2019 01:41 pm
Get a daily rundown of the top stories on Urban Milwaukee 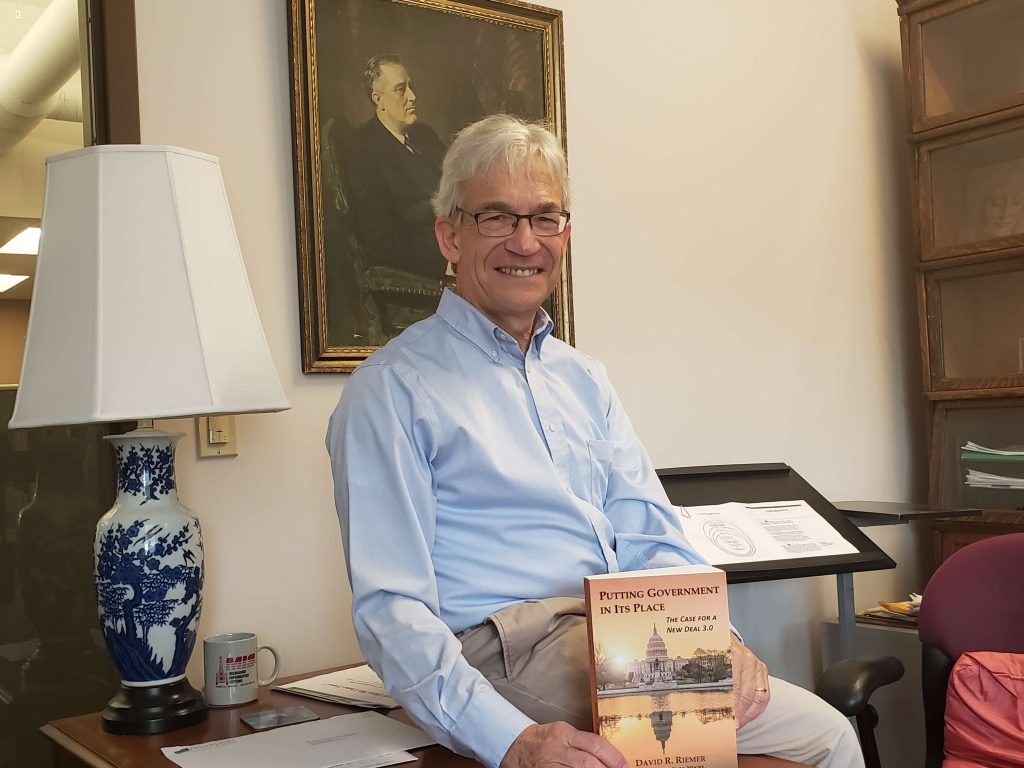 David Riemer, a former aide and longtime architect of policies aimed at alleviating poverty, has published a new book on how to update the New Deal. Photo by Erik Gunn/Wisconsin Examiner.

Eighty-six years ago, a new president undertook the most sweeping revision in American economic and social policy the United States had seen since the nation was born.

The New Deal fulfilled what Franklin Delano Roosevelt had called for during his campaign in 1932: “a complete change in concept of what are the proper functions and limits of the Federal Government itself.” It transformed the federal government into an activist force that sought to shape the economy and the broader society to promote public wellbeing.

There are few bigger fans of FDR or the New Deal than David Riemer, who has spent his professional life as a policy architect working with politicians as diverse as Ted Kennedy and Tommy Thompson. His downtown Milwaukee office, he points out with a smile, is “a little bit of a shrine to Franklin Roosevelt” – complete with an FDR bobblehead given him by a friend.

Riemer believes it’s time to thoroughly update the New Deal. He’s written a book that comes out Thursday, Nov. 7, to advance his ideas: Putting Government in Its Place: The Case for a New Deal 3.0.

The title isn’t Riemer saying government should get out of the way. Government, he believes, has an important role in ensuring economic security for the general public. The original New Deal, and the policies that have built upon it since, illustrate his thesis.

“Absent the specific policies that the original New Deal of 1933-1938 put in place and the New Deal writ large expanded over the next 80 years, the people of the United States would be poorer, sicker, and less educated,” he writes. “Our society would be shabbier. Our economy would not only be more panic-prone, but also far less dynamic and wealthy.”

At the same time, however, the intervening years have shown ways in which the New Deal fell short of its objectives.

Fixing those shortcomings will take more than simply further tweaking old policies, he argues. “If we keep tinkering and adjusting,” Riemer said in an interview, “we’re going to keep getting more or less the same results that we’ve been getting.”

Riemer is a former aide to Sen. Ted Kennedy and, later, Milwaukee Mayor John Norquist and Gov. Jim Doyle. He worked with the administrations of Gov. Tommy Thompson and President Bill Clinton to help design and implement BadgerCare, Wisconsin’s version of Medicaid, which broadened health insurance coverage for the poor.

In his book, he asserts there are “three broad purposes” for government: Protecting the public’ safety, health, resources, and infrastructure; promoting “each individual’s economic security, including equal access to health care and education” and enabling the market and the economy to work effectively. This, he says, is a responsibility that includes preventing damage to the environment, individuals and firms. 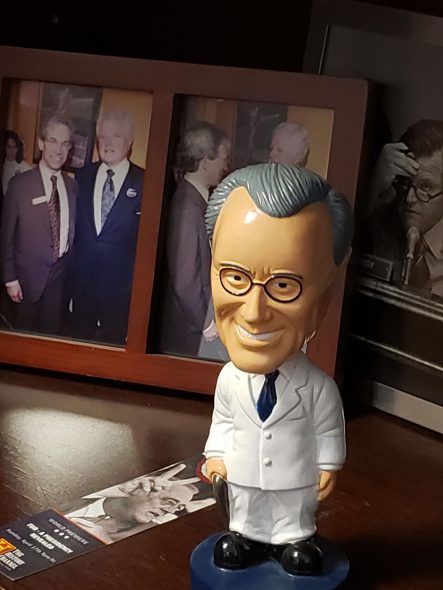 David Riemer’s office is decorated with this bobblehead of FDR. Photo by Erik Gunn/Wisconsin Examiner.

On those, government’s record is mixed. There have been “spectacular successes” from the New Deal, such as unemployment insurance benefits that have helped millions of people thrown out of work keep up with their bills and avoid losing their homes. Social Security has kept the vast majority of elderly people out of poverty. Bank deposit insurance and regulations have made bank failures just a fraction of what they were in the Great Depression.

But government also has failures to its account, from violent crime to public health problems to inadequate environmental protection and inadequate access to K-12 or higher education.

As Riemer sees it, the New Deal and subsequent policies enacted in its spirit have employed one or more of four approaches: promoting economic security; means-tested welfare programs; market regulation; and what he calls “market manipulation” – using taxes, tax breaks, subsidies and other incentives to encourage or discourage certain forms of economic activity.

Promoting economic security, he says, includes providing transitional jobs at minimum wage for the unemployed and underemployed. Such jobs would be short-term and aimed at ensuring that people who were unable to find private-sector full-time work would still be able to earn a living wage.

He also calls for raising the minimum wage to about $10-$12 an hour and indexing it to inflation; strengthening collective bargaining so that it is easy for workers to organize unions; and providing free childcare for working families along with paid family leave for new parents as well as for adults caring for ailing parents.

Riemer favors a stronger system for disability payments, while also allowing the disabled to earn transitional job wages if they wish. In addition, he proposes a new system of universal health care for people under 65 and for long-term care insurance, as well as Medicare, for those 65 and older.

On education, he favors shifting funding from local property taxes to the state, with a requirement that funding be equalized and additional funding for special education needs. He also proposes providing full federal support for “reasonable in-state tuition and fees” for technical and four-year public education.

Through those and other policies, Riemer envisions a “comprehensive, ‘universal,’ economic security foundation for all Americans,” which he contends would eliminate the need for means-tested welfare programs.

Those means-tested programs “require poverty or near-poverty as a condition of eligibility,” he writes. “Thus, by definition, they fail to lift the poor and near-poor anywhere close to an adequate level of income.”

Means-tested welfare programs also discourage work and “brand their recipients with a stigma” that leads recipients to dislike them while “many other Americans scorn them,” he writes.

Finally, by strengthening regulations – including making sure that businesses can no longer externalize such costs of their operation as environmental damage or dangerous working conditions – Riemer argues that the New Deal 3.0 would eliminate the need for the sort of incentives he calls “market manipulation.”

Providing strong economic security allows greater use of market forces, Riemer believes, especially if regulation ensures that businesses don’t foist the costs they incur onto taxpayers. He offers as one example a government-imposed surcharge on plastic grocery bags in New York State that he says has sharply reduced litter from those bags. “Prices are amazing at changing behavior,” Riemer says.

Riemer acknowledges that while many of his proposals may be popular, there remain powerful and wealthy political players who rather than rehabilitate what he calls “the house that FDR built” instead are intent on tearing it down entirely.

“We have to out-organize them,” he says. He points out that Roosevelt himself spoke bluntly of “oligarchs” of capital who stood in the way of the New Deal policies his administration championed to foster broader prosperity.