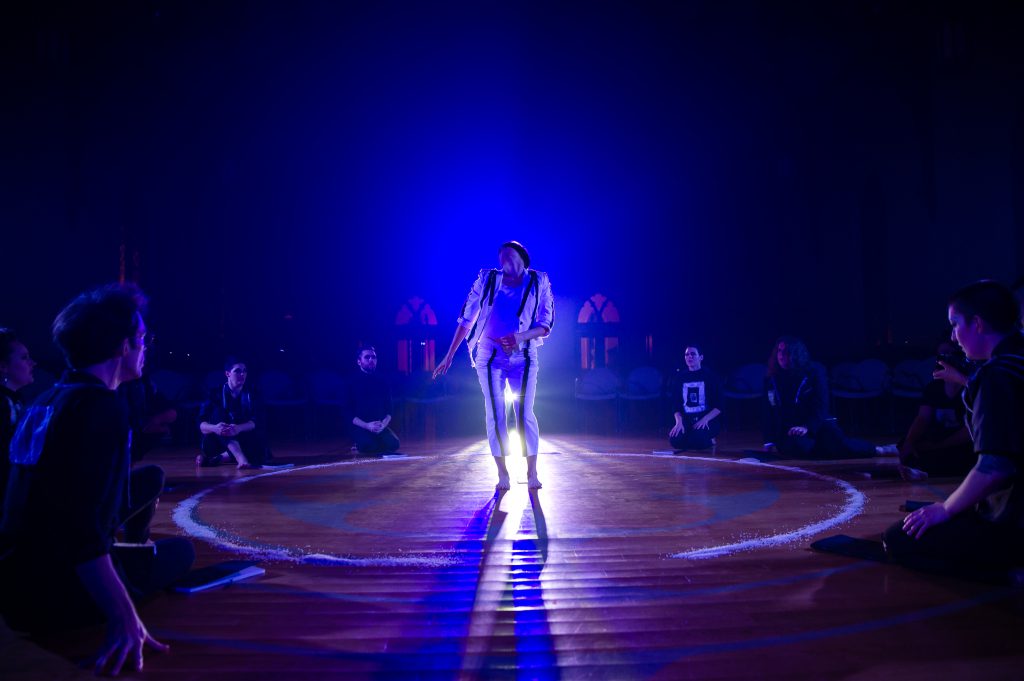 “Utterance” is billed as “a newly devised work of music theater.” It is a one-of-a-kind reflection on motherhood and female identity, and a great example of some of the talent and passion bubbling up in Milwaukee’s art and music scene. It’s a big, exciting collaboration between the vocal ensemble Aperi Animam, the multidisciplinary ensemble Cadance Collective, UW-Milwaukee faculty composer Amanda Schoofs, and the Milwaukee Opera Theatre, with artistic direction by that group’s leader Jill Anna Ponasik. With all these moving pieces, the result is still a cohesive vision with some pretty powerful moments.

The sanctuary of Calvary Presbyterian Church (the “big red church” at 10th and Wisconsin) was set up with seating in the round, an approach that worked well for the staging and to emphasize the shape of a circle (at one point, singers poured rice to form a ceremonial circle around the action). Multicolored lights pierced the darkness. In a nice production touch, every singer’s outfit featured a patch of white cloth with a symbol or pattern, pointing to a meaning not yet grasped.

It’s hard to overstate the sheer technical accomplishment of the combined ensemble, both as a whole and as individual parts. They managed the stylistic rollercoaster of alternating past and present with ease, and in Schoofs’s intimate, exposed music they confidently executed all manner of weaving lines, dissonant clusters, and even quartertones, from memory. Three soloists represented a trinity of female identity: Provocateur (performed by Xai), Ancient Knowing (Jackie Willis), and Volition (Elizabeth Smith). Sometimes they sang as a trio or with different subgroups of the chorus, and all three gave strong performances. Meanwhile, Emma Koi and Alicia Storin (flute and cello, respectively) contributed subtle, resonant accompaniment at key moments.

The beautifully produced concert program was a helpful guide through the music, especially to show the thematic continuity between de Lassus’s setting of prophetic text and Schoofs’s own visceral poetry. The first few movement pairs added up to a kind of multifaceted celebration of the virgin birth, and by the time we reached de Lassus’s “Sibylla delphica,” the musical contrast was really stimulating. The Renaissance aesthetic, with its bright, roving harmonies, pointed toward revelation after the more inward, devotional spaces of Schoofs’s music.

Christal Wagner, the dancer of Cadance Collective, made a striking introduction as a blindfolded figure in white entering the circle. During this movement, “Those Who Came Before,” the chorus sang otherworldly harmony, ending with a final statement of the word “breathe” in a vocal cluster that made my jaw drop. Choreography continued with a sort of ritual featuring milk as a sacrament, a silent dance between Wagner and Jackie Willis, and another moment where Provocateur/Ancient Knowing/Volition embraced and moved together slowly, whispering. It felt almost too intimate, too private for an audience, and I say that as a compliment.

At times the juxtaposition of sacred and secular text might have raised some eyebrows. In the eighth movement pair, the text “With my own eyes I saw the all-powerful God” was soon followed by “Myself / A god / I see.” However, this featured some of the most beautiful, serene music of the evening.

“A Brilliant Becoming,” the ecstatic final chorus, was led by the Volition (Elizabeth Smith). The music ended with her alone in the circle, her voice reverberating through the church, as the choir whispered at intervals.

Some words, sounds, and images remain in my memory from this performance. Phrases like “Eat the dark meat of your heart” and “Eternal burning of your birth” glowed like embers in the darkness. Xai’s solo “Become a Voice” was memorably lit with a hazy light, and she showcased her wide range throughout the evening, from a warm lower range to an intense upper soprano. And the trio’s moments of comforting/embracing on the floor were deeply cathartic.

I’m excited to see what future collaborations lie in store for all parties involved. Jill Anna Ponasik has established herself as a surefire creative advisor on a wide range of projects, and always seems to kick each production up a notch to higher levels of meaning. This provocative melding of sacred and secular reminded me of David Lang’s Little Match Girl Passion, a similarly intimate piece of music, which I would love to see Aperi Animam perform some day. 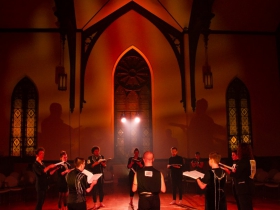 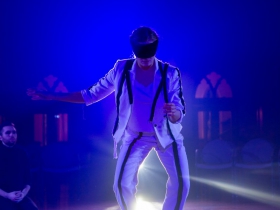 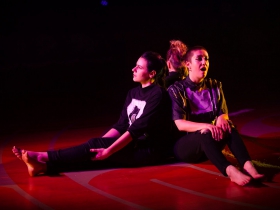