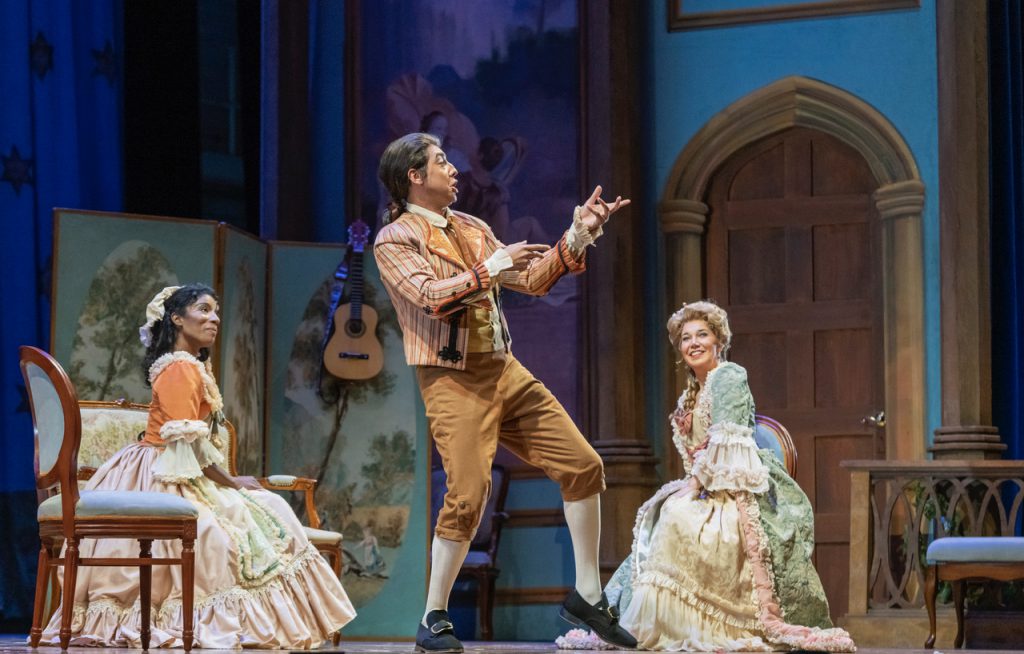 The Marriage of Figaro. Photo by Mike Miller courtesy of the Florentine Opera Company.

By the time the tale of Figaro got to Mozart in the 18th century, the shenanigans had gotten more complicated. That beloved title conniver had seen his friend the count turn lecherous, lusting after Figaro’s bride Susanna and abandoning his own beloved Rosina, now a countess.

In creating what is now one of the world’s most famous operas, The Marriage of Figaro – which opened the Florentine Opera’s 86th season this past weekend – Mozart concocted such soaring music, wicked melodic relationships and interlocked motifs for every libidinous twist in the comedic tale that few would dare change or even abbreviate a note.

Which also means the famous Pierre Beaumarchais comedy needs special attention to stay abreast of such remarkable musical agility. The tale relies on forged letters, old grudges and swapped clothes. Opera companies stage it with grand illusions – the one in Milwaukee features scenery from Philadelphia’s opera company, costumes from Baltimore, local lighting and design experts and smock-dressed peasants who sing, dance and be married.

Directors figure the grand opera elements have to be grander than the jests, so in staging they have fey fun with floppy feathers, fluttered fan, frisky flowers, tossed papers and sudden tableaus of slow motion to invigorate a school of British pantomime that only opera these days uses as a standard to justify the antiquities.

After all, the directors must give singers/actors more ways to survive the plot regurgitations within the music – recitatives that make delicious euphonic sense but reduce the story to a slow metronome and dragged-out punchlines even with English supertitles for the Italian libretto.

Director Shawna Lucey seeks to put her own stamp on this style of staging, but some of her ideas are so coy they hurt the eyes. In fairness, there are no easy solutions. Mozart will always be more memorable than the faster pace and quicker jests required in today’s comic plotting, and Lucey tries to fill every moment with a glance or a gesture. But other productions and other performers  have found workarounds that keep the eye as well as the ear intelligently engaged. At Uihlein Hall, it was mostly ear despite the lavish scenery and costumes.

The Rosina role steps out of comic antics into stillness and deeper emotion for a lamenting countess. It is an approach that the director and soprano Susannah Biller capture to perfection, building variety based on meaning in how her voice subdues and rises.

Most of Ariana Douglas’ work as Susanna is broad ‘Perils of Pauline’ reactions to keeping the scheming going, as if trapped in a silent movie, but this is Mozart and her big tones will get their chance. When he gives Susanna opportunity to blend her soprano with Rosina or sigh on her own, the results stun us into attention. These are the supportive moments when the Milwaukee Symphony Orchestra and the production’s conductor, Clinton Smith, are at their best. The orchestra demonstrates that special sensitivity that pulls the Mozart out of the familiar into the freshly emotional. The attention to the singers’ needs is expert throughout.

Also special is what is known as the breeches role (playing an overly romantic young man). Here soprano Abigail Levis proves the best mime on the stage while neatly modulating a famous love song.

Alexander Dobson as the now manic count and Calvin Griffin as the strutting or creeping Figaro are just fine with polished notes, though not quite building the war between baritone and bass the music hints at. But they are very much within the established traditions as are most of the rest of the company.

By this point in time, The Marriage of Figaro is an opera to takes chances with, but few impulses here were unexpected.