Too Many Wisconsinites Without Health Insurance

By Shamane Mills, Wisconsin Public Radio - Oct 2nd, 2019 12:42 pm
Get a daily rundown of the top stories on Urban Milwaukee 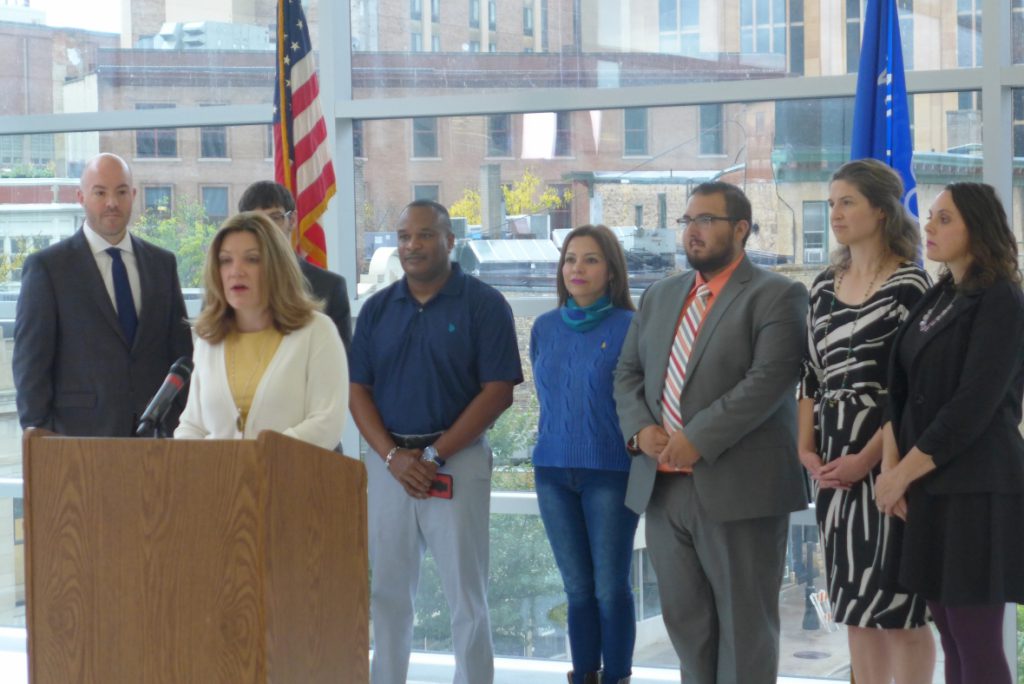 State health and insurance officials announce $500,000 in funding on Tuesday, Oct. 1 for a federally certified group that helps people get health coverage. The money will be used for outreach to sign people up for Medicaid and also private insurance sold on the federal marketplace, which opens Nov. 1. Photo by Shamane Mills/WPR.

Gov. Tony Evers‘ administration is forging ahead with plans to increase health coverage even as Republican lawmakers continue to oppose expansion under the Affordable Care Act — a law that is in limbo and could end up before the U.S. Supreme Court because of a pending legal challenge by a group of red states.

Under a two-pronged approach, the Wisconsin Department of Health Services and Office of the Insurance Commissioner are making efforts to boost private and government health coverage. State Department of Health Services Secretary Andrea Palm announced at a Tuesday press conference at the Madison Public Library that her department was awarding $500,000 in existing funds to Covering Wisconsin, a group that helps people sign up for insurance on the federal marketplace, Healthcare.gov, and Medicaid, known as BadgerCare in Wisconsin.

“Lack of health insurance affects far too many Wisconsin families,” said Palm, who noted more than half those who are uninsured have a job but can’t afford coverage.

Health officials estimate that more than 400,000 people in Wisconsin had no medical insurance at some point last year.

“That’s enough people to sell out 23 basketball games at the Kohl Center (in Madison). Yet, the reality is that most of these folks could never even afford a ticket to a game,” she said.

The governor campaigned on increasing access to health insurance and supported taking federal money to expand Medicaid under the Affordable Care Act. Republicans have opposed doing so and pulled a proposal to do so out of the governor’s budget proposal. There’s also a standalone bill by state Sen. Jon Erpenbach, D-West Point, and state Rep. Daniel Riemer, D-Milwaukee, that would accept more federal money to expand Medicaid eligibility to 133 percent of federal poverty level.

The half-million dollars in state money going to Covering Wisconsin will pay for seven full-time outreach workers. It will supplement what the group gets from the federal government. As a federally-certified Navigator agency, Covering Wisconsin will get $200,000 in each of the next two years from the U.S. Centers for Medicare and Medicaid Services. Navigators talk to consumers about getting health insurance coverage, assist them with enrollment, and help them understand how to use insurance.

People can begin signing up for coverage on Healthcare.gov Nov. 1. The enrollment period ends Dec. 15.