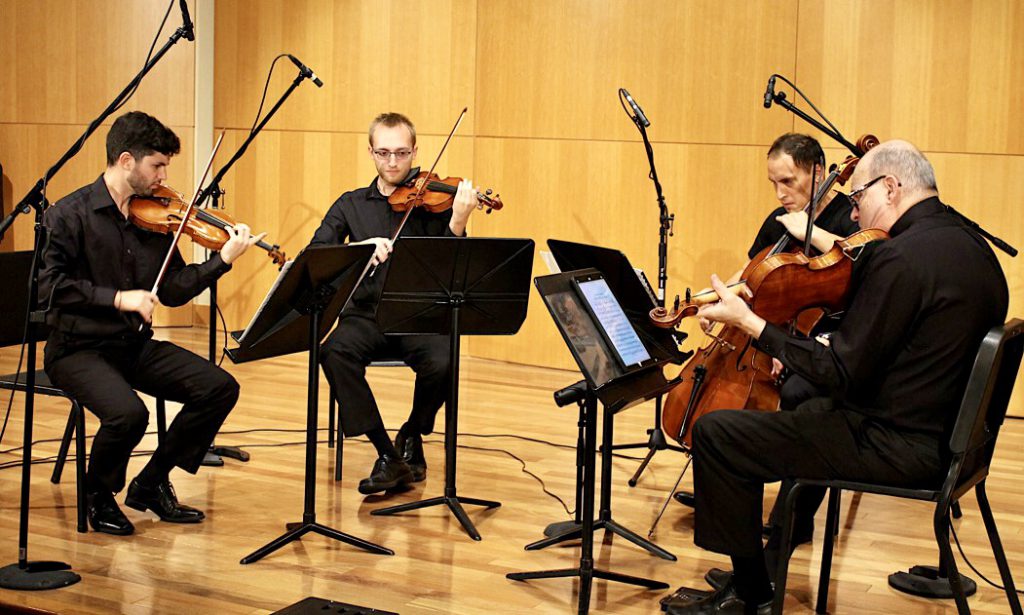 As the Milwaukee Symphony Orchestra has matured into a world-class organization, Milwaukee also benefits from efforts by MSO players to explore other opportunities for performance – particularly chamber music. Only a few ensembles offer a program series. Many other players appear at occasional events. Now a new chamber group has assumed a name, the 414 Quartet, and the intention to explore the serious string quartet literature together. They will play two masterpieces this Friday evening at the Women’s Club of Wisconsin.

The 414 Quartet, violinists Alex Ayers and Paul Hauer and cellist Peter J. Thomas formed with violist Nicole Sutterfield, formally on leave from the orchestra this season. Lewis Rosove will serve as a guest violist. Rosove is a part-time associate professor of violin and viola at Maranatha Baptist University and instructor of violin at the String Prep Program. He was assistant principal viola of the Milwaukee Symphony Orchestra for 22 seasons.

The first masterpiece, Ludwig van Beethoven’s last completed work, String Quartet No. 16 in F Major, Op 135 (1826) represents one of his more experimental chamber works. The quartet represents a return to an earlier form but in the hands of an experienced master.

Beethoven used sparse writing in his opening movement, building from brief fragments until a unified theme emerges. The result suggests that Beethoven returned to the page and eliminated all the notes he could to reveal the essence of the work. Sections call for independent short phrasing by each player, often explicitly in conversation with one another.

A quicksilver scherzo second movement plays the violins against the lower strings. A central trio features a hectic violin solo over an infinite whirling loop.

Kai Christiansen finds the legato phrasing in lovely ‘Cantate e Tranquillo’ third movement as “stark, hymn-like, humble and deep. It will slowly and perfectly break your heart. At its center lies the enigmatically dark and primordial brooding with a sharp stab of tragedy that, through its craggy mystery, seems to suggest that we are eavesdropping on Beethoven’s most private ruminations.”

In the concluding movement, Beethoven poises a question in a minor key “Muss es sein” – must it be? His eventual answer is an affirmative joyful response, “Es muss sein” – it must be!

Beethoven often wrote more dramatic material expanding the sound of four players, but the Opus 135 stands as an all-chamber work with no greater pretensions.

Schubert enjoyed a successful career as a popular writer of songs, writing over 600 lieder in his short life. In what might have been ‘mid-career,’ he turned his attention to chamber music and symphonic works. The 14th Quartet draws from one of his popular lieder for the theme and the spirit of the quartet. The subtitle “Death and the Maiden” follows the text of a dramatic poem by Matthias Claudius.

The poem tells of a disconsolate maiden who pleads with death to not take her life. The devil quietly proposes to the maiden the advantages of death – “Softly shall you sleep in my arms!.” The maiden will have none of it, as the music grows more agitated – “Pass me by! Oh, pass me by! … I am still young! Go.”

The quartet may be viewed as program music. A violent first movement appears to reflect the maiden’s horror and eventual resignation. The hauntingly beautiful slow movement variations are constructed from the melody by Death in Schubert’s song. A hectic scherzo is followed by a finale as a tarantella. Music critic Walter Wilson Cobbett concludes, “The finale is most definitely in the character of a dance of death; ghastly visions whirl past in the inexorable uniform rhythm of the tarantella.”

Works such as these two complex quartets benefit from the extra effort of a quartet that works to know one another and reach a common interpretation of these masterpieces. I would hope that the 414 Quartet will be able to work together for some time.

The 414 Quartet’s concert begins at 8:00 p.m. in the ballroom at the Woman’s Club of Wisconsin, 813 E. Kilbourn Ave., Milwaukee, WI 53202. Historically a favored location for chamber music, the hall has excellent intimate acoustics.

The Quartet is managing its own concert. Tickets can be purchased for $15 general admission at the door. $10 tickets are available for students and seniors. The Quartet will not be able to process credit cards. Rather than purchase pre-sale tickets online, attendees may RSVP to reserve seats by emailing Peter Thomas at pjtcello@yahoo.com. (Include your name and the number of seats requested.)

Doors open at 7:30 p.m. A cash bar is available. Limited self-parking is available in the lot off of N. Cass and E. Wells Streets.

Guests are invited to participate in a Women’s Club tradition, dinner and a concert. The dining staff of the Club will offer a three-course prix fixe meal in the club’s private dining room starting at 5:30 p.m. RSVP for the dinner by calling the Women’s Club at 414-276-5170.

Note: Last September 2018, the same four players gave a concert that may be reviewed on YouTube.