Speakers at a weekend forum say cases being reported in urban, suburban and rural areas. 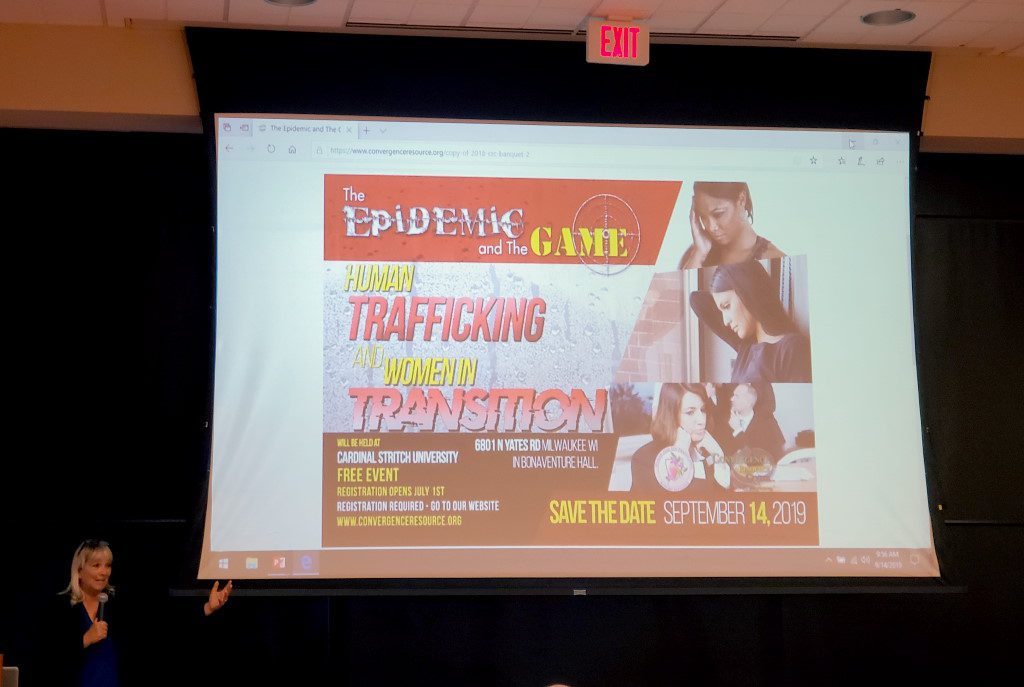 “The Epidemic and the Game.” Photo courtesy of Dave Fidlin.

This was the resounding theme speakers shared at a recent forum about the epidemic of human trafficking. The issue has gained attention in recent years, but more work — including education in classrooms — is needed, a panel of experts said.

Milwaukee-based Convergence Resource Center hosted the forum, “The Epidemic and the Game,” on Saturday at Cardinal Stritch University. CRC is described as an organization that works to help human trafficking survivors rebuild their lives.

In a statement issued in advance of the forum, Debbie Lassiter, CEO of CRC, said issues linked to human trafficking have been reported across the state in recent years.

“It is happening in all 72 counties in Wisconsin,” Lassiter said in the statement. “People think human trafficking activity only happens in certain areas, like cities, but many cases of human trafficking are coming from the suburbs now.”

Lassiter’s comments were echoed from the disparate speakers who offered up insight at the event.

Tamara Remington recently retired from law enforcement after nearly a quarter-century of service. Remington began her career in San Jose, Calif., before joining the force of the Sheboygan Police Department as a detective specializing in human trafficking.

At the forum, Remington recounted a tip her office received one day of offers circulating of girls being available for sex. The tip, according to Remington, included the prospect of clients having a sexual experience with a girl who was or was not drugged.

“That should sound outrageous,” Remington said, particularly in a community such as Sheboygan. “But it wasn’t.”

While human trafficking, particularly in the sex trade, is often times associated with urban settings, Remington said the issue is occurring in communities of all sizes and per-capita income ranges.

The common thread among victims, Remington said, is a vulnerability that puts them squarely into the cross hairs of enslavement.

“The victims are not dumb; they are some of the best and brightest,” Remington said. “But the traffickers aren’t dumb either.”

Since leaving the Sheboygan Police force, Remington has funneled her efforts elsewhere, including advocacy to bring instruction into public education classrooms.

Sam Wijeyakumar, who heads up a rescue organization called Rahab’s Daughters in Hoffman Estates, Ill., gave a first-hand account of human trafficking at the forum. Wijeyakumar said she is all too familiar with the issue because she was once enslaved in it.

Born to well-to-do parents and being a high achiever, Wijeyakumar said she likely does not fit the stereotype of someone who would fall into the trap of human trafficking.

“I had trouble assimilating. I moved from city to city,” said Wijeyakumar, who fell into human trafficking by answering a job ad to work at a nightclub which turnout out to be work at a brothel.

Looking back at that chapter of her life, Wijeyakumar concedes, “I was a person on the fringes.”

At the forum, Wijeyakumar issued a warning call to all parents.

“If your child has a phone, they are susceptible to being trafficked,” she said.

While human trafficking is often times associated with sex, it can manifest itself in other ways.

Javier Acevedo, anti-human trafficking outreach specialist and victim advocate with UMOS-Wisconsin, said the immigrant population is especially vulnerable to the epidemic — particularly for people offered with promises of better lives from their native countries, only to be enslaved into domestic servanthood.

In his role, Acevedo said he oftentimes has to do legwork within his organization as cases are reported because state and federal resources within law enforcement and elsewhere are spread thin.

“I have to do about 80 percent of the investigating,” Acevedo said.