If anyone was worried that Present Music “wouldn’t be the same” after Kevin Stalheim’s stepping down as artistic director, rest assured it is emphatically, joyously the same. This is not to mitigate Mr. Stalheim’s incredible input, but he has left the leadership in the capable hands of conductor David Bloom and violinist Eric Segnitz. The programming is just as intentional and cohesive. The latest program, re:re:rewrite, explored various pieces that re-appropriate material, with no weak link to be found. And Mr. Stalheim, ever theatrically inclined, still made a cameo in this concert.

The first music that excited concertgoers heard at Helen Bader Hall was Nico Muhly’s Drones & Violin. Ilana Setapen, associate concertmaster at the Milwaukee Symphony, did a great job modulating between long, serene chords and more excited outbursts, over a backdrop of drones by a chamber ensemble. The whole piece was sensitively balanced, and it worked wonderfully as an opener with its atmosphere of static expectation. 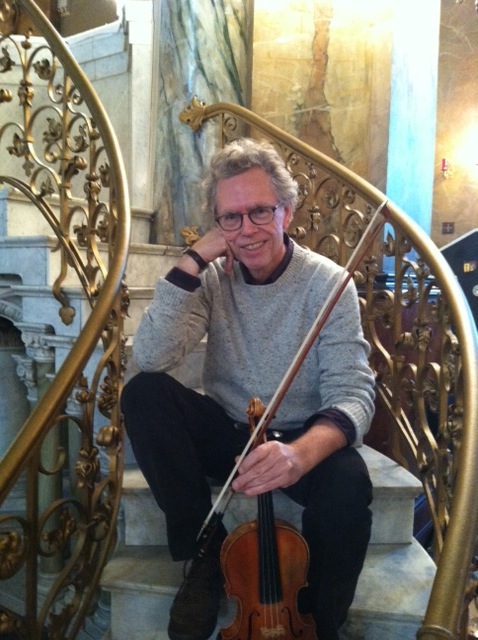 The Muhly led seamlessly into Gabriella Smith’s Brandenburg Interstices, a stylistic rollercoaster ride that reminded me of a less nightmarish version of one of Alfred Schnittke’s Concerto Grossos. In some ways it felt like a literal rollercoaster, with the stasis of the first piece now giving way to dizzying plunges and ascents. But the primary focus was a patchwork of Bach quotations (complete with harpsichord!) that morphed into other musical styles over the past century. A memorable section near the end turned into a full-on fiddle hoedown, with the harpsichord humorously jamming along. The slower sections of the piece returned to some of the same introspective moods of the Muhly, making for a good pairing.

Next was an arrangement by Jacob Garchik of Rhiannon Giddens’ song “At the Purchaser’s Option,” in which a slave woman fears being separated from her child. Singer Donna Woodall provided warm vocals and engaging presence, singing over a lovely, pizzicato-heavy string-quartet accompaniment.

I was excited to see Gyorgy Ligeti’s Car Horn Prelude on the program, taken from his opera Le Grand Macabre. There was much fun in the unveiling of the rack with dozens of car horns, and the actual music, played by several percussionists and conductor Bloom, was joyously loud and crisp. I still picture Maestro Bloom’s cunning smile as the last notes sounded and led into Hymn to a Great City by Arvo Pärt. This piece for two pianos gave a spotlight to the two pianists of the night, John Orfe and Michael Mizrahi. Together they conjured up rich sonorities and arpeggios. A ringing cell phone in the audience contributed some additional arpeggios, which just happened to be in the same key as the music. Lucky.

The final piece of the first half was Caleb Burhans’ Escape Wisconsin, a frenzied exploration of a scale. Tight interlocking figures and canons throughout the ensemble at times sounded like they were on the verge of falling apart, but maybe that was the intent of the composition. There was a nice moment when the double bass and bass clarinet appeared with some long tones to frame the content. Bloom led the ensemble to an exciting conclusion with some real rock star energy in his motions.

After intermission, composer Christopher Cerrone’s South Catalina took the audience on a cathartic ride. Under dimmed lights, delicate bowed vibraphone from Carl Storniolo and clarinet multiphonics from William Helmers sounded into the hall, setting off twinkling chain reactions in the ensemble. Bloom offered some beautiful conducting, with gestures imbued with meaning, particularly in louder moments. There was something grand and intangible in this music.

Steve Reich’s Radio Rewrite, clearly an inspiration for the program title re:re:rewrite, formed the climax of the evening. As a meditation on the Radiohead songs “Jigsaw Falling to Place” and “Everything In Its Right Place,” it also had the most mainstream appeal of the night. The mood was perfect for this opening concert: grooving, plunging forward into the future, with everything a little scary and uncertain. It was a high-energy performance, with tension maintained in slow sections. Bloom’s conducting at the close of the piece conveyed palpable excitement.

For anyone who was itching to hear more Radiohead after Radio Rewrite, Present Music’s final offering was a literal arrangement of “Everything In Its Right Place” by John Tanner and Segnitz. Before the music started, a bit of theater ensued as Stalheim was asked from the audience to play a typewriter onstage. When the full band kicked in, I think I let out a sigh of wonder. It was a great arrangement and just so cool. Donna Woodall, the vocalist from At the Purchaser’s Option, returned to sing, the typewriter clicked away, the ensemble grooved, and then it really became a Present Music moment. Jahmes Finlayson’s Rolling Thunder appeared, rolling car tires down the aisles and playing them as percussion, and the Extra Crispy Brass Band processed down to the front of the hall. Everything was in its right place. The musicians happily played their instruments, the audience was ready to traveled along, and the joyful cacophony of sound drowned out any vestiges of cynicism.

I really like how Present Music concerts always keep the music going even as the official program is over. It encourages people to stay and mingle in the hall, and provides a sort of transition for those diehard fans who aren’t quite ready for the music to be over yet. And the celebratory atmosphere is really like nothing else in Milwaukee. I’ve been to maybe five of these concerts, and they get better every time. If you haven’t boarded the musical rollercoaster yet, it’s time. Whatever your music background, this is a ride worth taking.