Colectivo owner Lincoln Fowler and his wife Lilith paid $450,000, will make it their home. 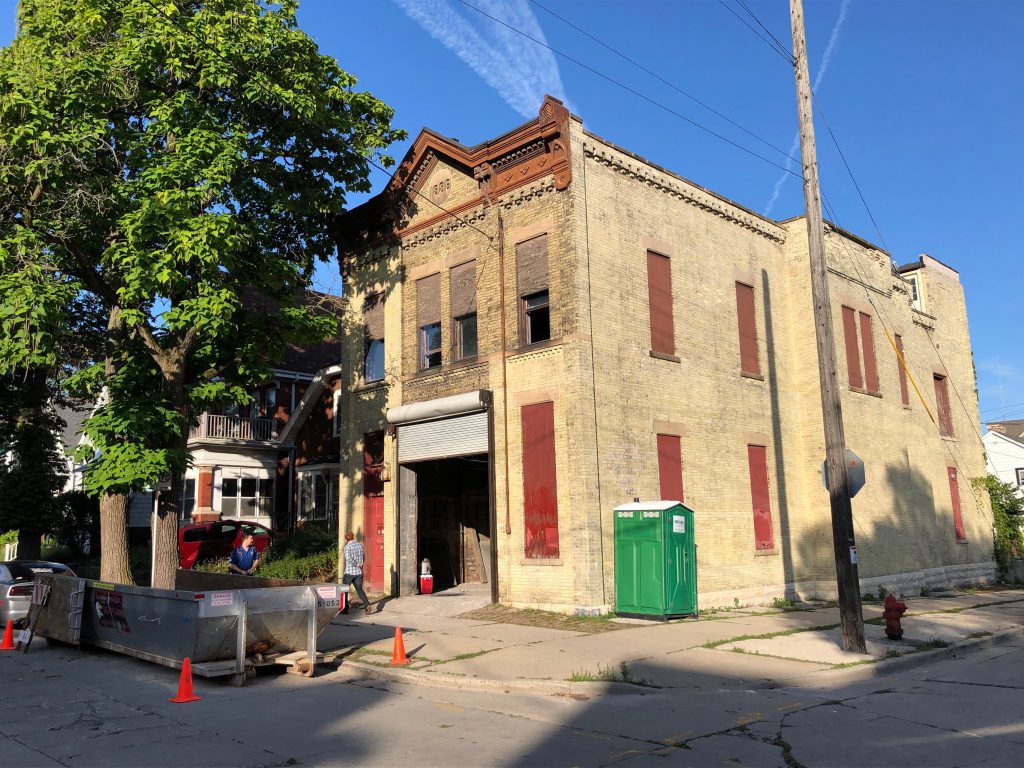 The City of Milwaukee Fire Department has long been a leader in best practices in its administration and operations. It was one of the first to treat firefighting as a profession, introducing drills, training and executive planning for the future needs of a growing community.

This latter element was a complicated business during the late 19th century when the population was exploding, along with the city’s area. New populations and new places had to be served by firehouses. Complicating matters is that the stations needed to be built in areas that were not yet fully developed. The firefighters would be on duty as new frame houses grew up among them, ready to burst into flame on moment’s notice.

Milwaukee’s population grew from 115,000 in 1880 to 204,000 in 1890, and would reach 285,000 by the turn of the century. One area of particular growth was the Lower East Side, where Polish immigrants by the thousands squeezed into small homes, with as many as four units lined up one behind the other on a single lot. As new relatives arrived to join their families in the New Land, the cottages were jacked up and a new unit was constructed on the lower level, giving us the Polish Flat.

In the mid 1880’s, the Fire Department decided that a new Ladder Company would be needed in the vicinity, and located this structure at the southwest corner of what was then Bartlett Avenue and Irving Place, just blocks away from a firehouse at the corner of Brady Street and Franklin Place. The elegant High Victorian Italianate Cream City Brick building that rests on a limestone base bears a rondelle above that sports the station’s date of construction — 1886.

It is one of 30 stations designed over a 20-year period by Sebastian E. Brand, a German-born mason who was on the force when his architectural talents came to the eye of Fire Chief James Foley, who assigned him the task of standardizing the design of the department’s many new buildings. Often they replaced wooden sheds and other rickety structures.

To quote from the building’s nomination for historic designation:

The Milwaukee Firehouse Ladder Co. No. 5 is significant as an important example of civic architecture from the 1880’s. It was a symbol of the city’s first attempts at standardizing station house design in an attempt to provide a state of the art facility that was economical as well as recognizable to the populace. It is also significant as the earliest surviving station house designed by Sebastian Brand, a Milwaukee firefighter who was elevated to the role of Fire department architect and who put his distinctive stamp on station house design for over 20 years. Brand was the first municipal employee assigned to design buildings for the city and left a legacy of finely detailed High Victorian Italianate structures, of which only a small number remain.

Brand designed the buildings and supervised their construction while continuing to serve on active duty as a firefighter. This model civil servant received no additional compensation for his architectural work, saving the department an estimated $14,000 over his career. Today, 13 of his firehouses survive, with six still on active duty, including his masterpiece, Fire Department Station No. 3 at 100 W. Virginia St., which dates to 1900. Brand retired from the force in 1919 at the age of 75 after a remarkable 47 years of service. He died in 1923 at the age of 79.

In Service Only 28 Years

Unlike its Brady Street counterpart, which remained in operation for 142 years before closing at the end of 2017, Ladder Company No.5 had a relatively brief run here. The ten-man station closed in 1914, after only 28 years in operation, and a year after a gasoline storage tank and pump were installed, presaging a new age. The year 1914 was also when the department bought its first motorized equipment, greatly expanding the radius of operations for personnel, as well as their efficiency. (The last horse-drawn vehicles were discontinued in 1928.)

Although the building was shuttered, the city held on to it, perhaps for future use or possibly through bureaucratic inertia. The Common Council suspected the latter and undertook an investigation. This building was among those on “a schedule of lots and parts land owned by the city now lying vacant and not made use of,” provided by Percy Braman, Deputy Commissioner of Public Works in 1920.

The Irving Athletic Club was here in 1922. A proposal to operate an auto body and paint shop did not advance. Prompted in part by a discouraging report on the building’s condition, which called for expensive repairs and noted vandalism at the property, it was put up for sale.

A Warehouse for Over Nine Decades

The city sold the former firehouse to the Paul Kortsch Storage Company on August 6, 1924 for $10,000. The family-owned firm was founded in 1870, and remains in business today as ABC Kortsch Moving & Storage. The firm used both floors of the 4,527-square-foot building for a warehouse. On August 14th, 1924, Kortsch officials headed to City Hall to make an “Application for The Construction and Erection of Elevators,” selecting a $350 Rosenberg Wood Frame Hand Power Elevator with a capacity of 2,000 pounds within its 7’3″ by 6’2″ cab. The machine, located in the northwest corner of the building, was supported by timbers from the top floor for its 15-foot run. The permit clerk was informed that “this is a remodeled hand power elevator,” and was assured that it was “equipped with the necessary safety gates at all landings.” The inspector came by for periodic inspections of the unit, but otherwise the once-bustling fire station was a silent and unattended place, save when goods were hauled in and out.

In 1942 Kortsch officials went shopping for a replacement elevator, and found yet another second-hand unit suitable for its purposes, selecting a Ketchefer Traction Elevator that set them back $600. A visit made on April 1st, 1957 alarmed the elevator inspector, who went into all-caps mode in his report: “MAIN MACHINE GLAND IN NEED OF REPACKING.” With its gland repacked, the elevator continued its ups and downs.

By that time nearly all of the windows on the building were boarded up, as they remain today. The exceptions were on the facade, where the second-floor windows remained to admit light into the building. Beneath them, the old Brand-designed double doors for the engine access were replaced by a windowless metal roll-up unit. In June, 1976, the assessor came by to take a look at the place. “Former Fire Station now used as warehouse. Storage of household articles apparent in upper front windows. No heat and apparently no water service. Solid Brick Walls. No heating system – washroom facilities or a water supply of any sort,” he recorded.

In 1998 Lincoln Fowler and Lilith Fowler, intrigued by the building, and envisioning it as a residence, offered to purchase the property from Kortsch, but the time was not right. In late 2003 the building received an individual  historic designation from the city, preserving its exterior and regulating future changes to the structure. In 2018, after plans to convert the building into a home were dropped by a previous applicant, the Fowlers bought the building from Kortsch for $450,000. In April, 2019 the couple received a Certificate of Appropriateness for the conversion, which is now underway.

Lincoln Fowler is a founder and co-owner of Colectivo, the Riverwest-based coffee dealer, which includes a renovated N. Prospect Ave. industrial building as one of its outposts. Lilith Fowler is the Executive Director of the Harbor District. The district has dozens of former warehouse buildings in need of rehabilitation, so, when renovations are complete to this fine old Milwaukee firehouse/warehouse, the Fowlers will feel right at home. 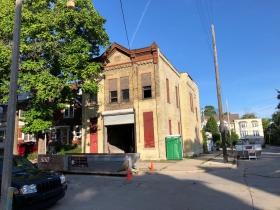 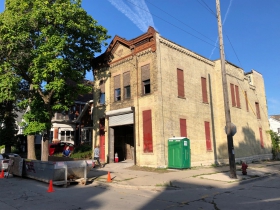 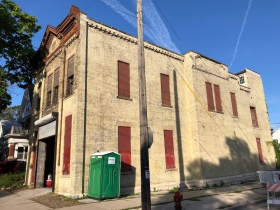 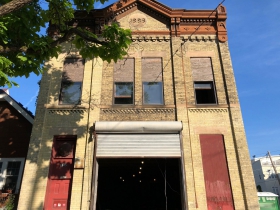 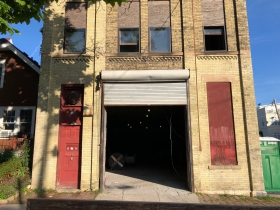 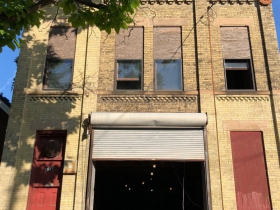 How Milwaukee is it? It is 1.7 miles northeast of Milwaukee City Hall.