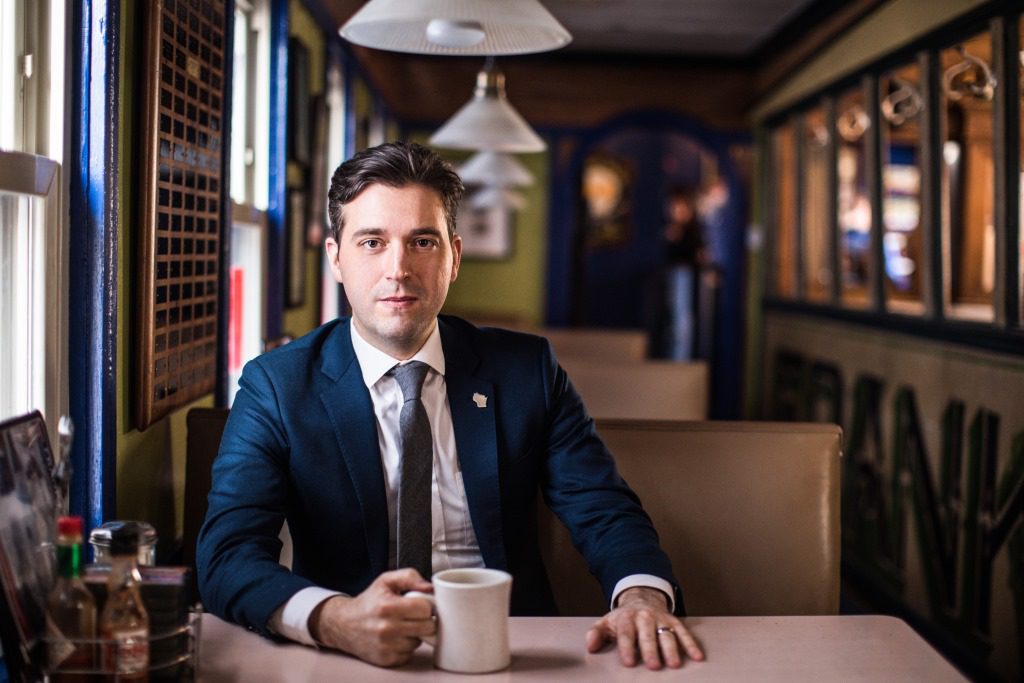 Josh Pade was a political unknown from Southeastern Wisconsin when he sought the Democratic nomination for governor last year. Now he is returning to the political ring for the 2020 election — this time making a bid for Congress in the state’s 1st Congressional District.

So far, Pade is the only Democrat to announce plans to run for the seat now held by Bryan Steil, a Janesville Republican and former aide to Paul Ryan, who held the seat for 20 years until he chose not to run again in 2018. The last Democrat to represent the district was Peter Barca, who was defeated in the 1994 election.

In an interview with the Wisconsin Examiner, Pade describes himself as a candidate who would reach out to “all the collars” in the district, from blue-collar manufacturing workers to white-collar professionals, and to urban, suburban and rural voters alike: “I’m not going to write off anybody.”

Pade, who grew up in Kenosha and now lives in the area, is a lawyer and formerly worked in management for J. Crew, the clothing retailer. He is also a former intern for former Sen. Russ Feingold (D-Wis.) and subsequently for Sen. Dianne Feinstein (D-Calif.).

While his campaign website doesn’t yet delineate any policy positions, Pade has identified health care and shoring up democracy among other issues as central to his campaign.

He has vowed to reject corporate political action campaign money to ensure that “people know that the ideas you’re telling them, the things that you believe in, come from a place of conviction rather than a place where a company just wants someone to be a spokesman for them.”

Even with a touch of gray in his hair, Pade might easily pass for younger than his 39 years. He speaks rapidly and earnestly, whether explaining his seemingly brash decision to join the governor’s race, talking about his growing up in Kenosha, outlining his policy positions or making the case why he can do what no Democrat has done in a quarter century: recapture the Congressional seat that Les Aspin held for more than a decade before becoming President Bill Clinton’s first secretary of defense.

He describes himself at one point as “a history nerd” and shows it. Offering his take on whether elections are won by ideas or by emotion and stories, he replies, “Both.”

“Ideas win elections with emotion,” he continues, and goes on to succinctly describe how politicians as different as John F. Kennedy and Ronald Reagan found ways to couple a set of political ideas to a vision that touched hearts. “Ideas alone are not going to win an election. You have to tell a story. You have to tell a narrative.”

He calls his leadership philosophy that of “the servant leader — holding up the people that are working for you.” It’s a concept he learned working for a central Wisconsin family grocery chain in his late teens and early 20s.

Growing up in Kenosha helped inform his political and policy outlook, Pade says. Both of his grandfathers were factory workers and union members; he learned early about the labor movement from them. His father started in factory work but didn’t like it, so he took technical college courses in computer coding and went to work in the infant information technology industry in the 1970s.

Those were good years, Pade recalls. “We just assumed everything was always going to be the same.” Then, when Pade was 14, his father died of a sudden heart attack. His mother, a secretary for the family’s church, “wasn’t making a lot of money,” he says. “We were relying completely on Social Security [survivors] benefits.”

With his father’s death, “We lost our health insurance.” His mother purchased what he calls a “junk insurance” policy with a high deductible. He remembers times when someone in the family got sick and their family doctor gave the family free generic medications.

Pade got his first job at age 16 working in a grocery store, where the union contract provided him with full insurance coverage. A year or so later the family moved to Marshfield, where his mother had gotten an entry level clerical job working for the Marshfield Clinic.

The news that his mother’s Social Security survivors benefit would soon expire once again upturned the family’s lives. Pade, then 17, went to work for Festival Foods. The Onalaska-based grocery chain was growing, and for the next several years Pade worked in management for the company, traveling the state as it expanded.

He had started college classes at the University of Wisconsin-Marshfield, but stopped to focus on work. In 2003, he resumed college at UW-Eau Claire and interned in Washington, D.C. for Feingold. He graduated in 2005 with a bachelor’s degree in political science and economics,  and in 2007, a year after his mother died, enrolled in law school at Suffolk University in Boston, where he focused his studies on financial services law.

After law school, Pade says he talked his way into an internship in Feinstein’s office in Washington, moonlighting in a J. Crew store for extra money and “for the discount on clothes to wear to the office,”  when he was recruited to join the company’s operation risk management department.

Pade returned to Kenosha in 2016, commuting cross-country for his work. He started going to some of the events organizing opposition to early Trump administration moves such as the attempts to roll back the Affordable Care Act.  After getting married at the end of 2017, he decided to run for governor in 2018. One of 10 people who vied for the Democratic party nomination, he got 1% of the vote in the August primary.

“I was looking at what I could contribute to the whole statewide conversation,” Pade told the Wisconsin Examiner. Because of his connections around the state through work and college, he decided a statewide run would be “a good first step to getting involved” in politics in what he knew would be “a long-shot race.”

That race, in turn, laid the groundwork for his decision to run for Congress, he said. During the governor’s race he had made contacts in southeastern Wisconsin. But in the time that followed, he also had reflected on his policy interests and experience and decided that they revolved largely around federal issues.

“My approach to policy, my approach to politics, kind of fits the swingy nature of the district — having grown up in a family that came from the labor community, but also my dad being among the first of the office workers that live in this community,” Pade says. “I know first-hand what that tradition has been like for families in the district, whether the old families who have had to change careers, as well as the new families who are building new communities, who want good schools and safe communities and all those things. Connecting with them on those issues and advocating for the kind of policies they’re looking for in D.C., I just think I’m a really good candidate.”

During his interview, Pade didn’t focus on Steil, the current 1st-district congressman, until asked directly what his critique would be of the incumbent:

“Rep. Steil is an example of the kind of special interests [and] the type of government policies that  protect people that are shipping jobs overseas, tax cuts for the wealthy while the middle class gets squeezed, and not having  a lot of vision for how we’re going to bring our district, bring our country forward in the 21st century. That is a lack of leadership.”

“There have been a few votes here that just really show whose side Rep Steil’s on,” he continued. “We see votes against protecting people with preexisting conditions and forcing them either to health care they can’t afford or health care that is junk plan that they can’t use.”

(Steil’s staff did not respond to a request for comment about Pade’s criticisms.)

In his own approach to health care, Pade calls the Affordable Care Act passed during President Barack Obama’s first term “a great down payment on ensuring that every American had health insurance.” He adds: “It didn’t finish the job.”

He’s skeptical of Medicare for All proposals that would eliminate private health insurance; instead he prefers a “strong public option” that would expand the choices for patients among insurance plans. A reformed private insurance market could hold prices down through competition, he argues.

He also favors reducing interference with doctor-patient decisions and aggressive policies to cut the cost of prescription drugs. He advocates for a stronger focus on nutrition and other health promotion practices, particularly for infants and younger children, calling them “health care investments” with the potential to bring down health care costs in the long term.

Another top priority issue, he says, is  “protecting our democracy” by working for secure elections so that “we’re not going to continue to be at risk from foreign powers trying to influence our election.”

“Protecting democracy” includes eliminating partisan gerrymandering, enacting campaign finance reform to end unaccountable so-called “dark money” from being used to promote or oppose political candidates, combating restrictions that make it harder for eligible voters to register and to vote and restoring “a proper balance of powers with Congress” by standing up to presidential executive orders.

But he also is campaigning for  “thinking long term,” he says: “Thinking about where the country’s going to be in 2030-2040, and how we shape that world and claim the future.”

To that end, he said he would support “an outcome focused, data-driven set of policies on what we want to achieve that puts results above partisanship” and promotes innovation in energy, combating climate crisis and responding to issues such as pressures on family farms.

Mass shootings and gun violence are also among the issues he cited as key elements of his campaign messaging. The absence of safety in public places, from schools to places of worship, shows “what happens when there’s a vacuum of leadership at the top,” says Pade.

“We need leadership that’s able to stand up and say what are the decisions that we need to make now that’s going to make that happen and do it the right way. It’s just not happening.”