By Danielle Kaeding, Wisconsin Public Radio - Aug 12th, 2019 05:20 pm
Get a daily rundown of the top stories on Urban Milwaukee 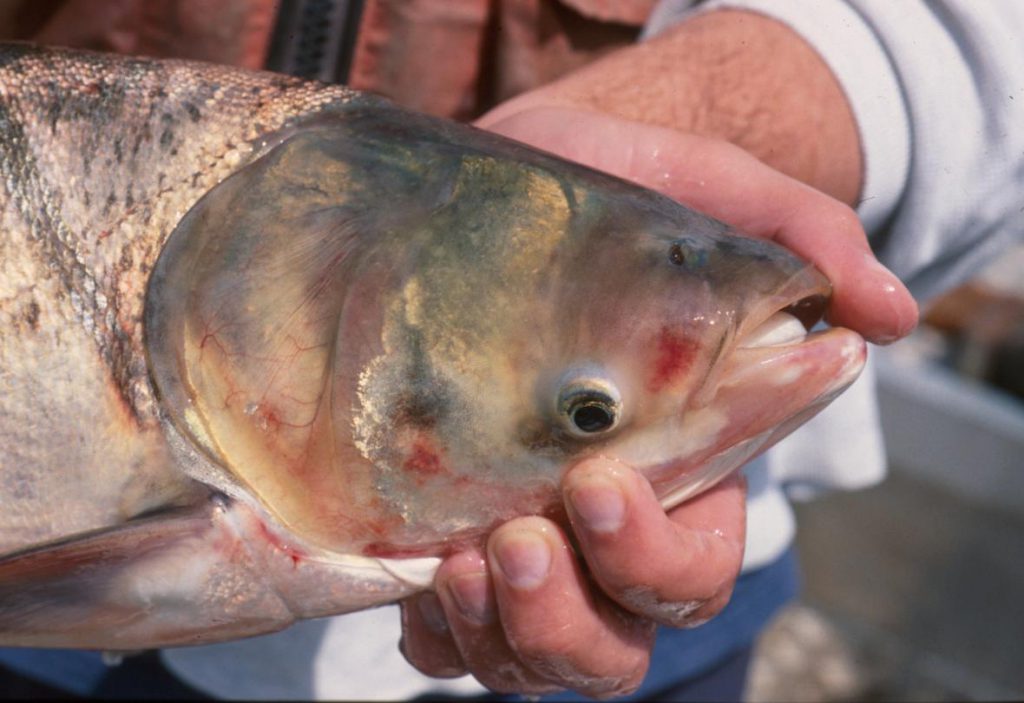 Asian carp. Photo from the Wisconsin Department of Natural Resources.

New research from the University of Michigan finds Asian carp could become more widely established in Lake Michigan if the invasive fish is introduced into the Great Lakes. The study was published Monday in the journal Freshwater Biology.

The study reinforces the fish is highly adaptable and resilient even in offshore areas of Lake Michigan where there’s not a lot of food, according to lead author Peter Alsip, ecological modeling data analyst at the University of Michigan’s Cooperative Institute for Great Lakes Research.

“We found that bighead carp actually could survive — find suitable habitat throughout the majority of Lake Michigan’s extent — during several months in the summer to fall,” said Alsip.

However, Alsip noted bighead carp appeared more resilient than silver carp — both of which are one of several Asian carp varieties. He said modeling showed the silver carp required more food than bighead carp to maintain weight and grow, confining them to nearshore areas like Green Bay.

Previous studies have examined whether Asian carp would be able to survive in Lake Michigan based on the presence of plankton, a common food source for both native and invasive fish. Those findings had suggested that habitat for bighead carp would be limited to productive, nearshore areas.

Alsip said they broadened the diet of Asian carp in their modeling to include detritus, which consists of decomposing organic material that includes excrement from mussels. He said their findings show that Asian carp may be able to mitigate weight loss and successfully survive journeys across the lakes if they’re feeding on multiple food sources.

“While Lake Michigan is deeper, colder and less productive than most habitats that these fish typically exist in, the fact that our study shows that they are at least able to survive in the offshore and nearshore indicates that these really are formidable invaders,” he said.

Alsip said the findings reinforce the need for preventive action to keep Asian carp out of Lake Michigan.

“It really just validates our position all along that we can’t afford a single one of those fish to get into the Great Lakes,” said Tammy Newcomb, senior water policy advisor with the Michigan Department of Natural Resources.

A variety of fish species use the nearshore areas and river mouth areas of Lake Michigan, including yellow perch, walleye and smallmouth bass.

“If (Asian carp) were successful to spawn and reproduce and develop a large population, they could have a fairly dramatic impact on the algae and zooplankton that is left in Green Bay for the other species of fish and other organisms in the bay,” said Bob Wakeman, statewide aquatic invasive species coordinator with the Wisconsin Department of Natural Resources.

The U.S. Fish and Wildlife Service has been coordinating with agencies in Illinois and Michigan to conduct sampling to track environmental DNA of the fish. Illinois currently has three electric barriers and 14 miles of fences to keep the fish from making its way into Lake Michigan. The state also contracts with commercial fishermen to remove more than 1 million pounds of fish each year, said Kevin Irons, aquatic nuisance species coordinator with the Illinois DNR.

“We’re actually going to roll out a program that takes the fight farther downstream over the next month removing from Peoria Pool, which is more than 150 miles from Lake Michigan because the data tells us that reducing those populations will be the best bang for the buck in preventing their spread,” said Irons.

Great Lakes leaders have supported efforts to install new defenses measures at a crucial choke point on the Illinois Waterway System at the Brandon Road Lock and Dam in Joliet. The cost to implement technologies including a bubble curtain, noisemakers and electric barriers would run at least $778 million and as much as $831 million under a proposal recommended by the U.S. Army Corps of Engineers. States and environmental groups have called on Congress to provide funding for the plan.

“I think implementing the plan that the U.S. Army Corps of Engineers has identified for Brandon Road Lock and Dam, which is about 50 miles from Chicago and Lake Michigan, is the critical next step that needs to happen in order to keep Asian carp from moving any closer to Lake Michigan,” said Molly Flanagan, vice president of policy with the Alliance for the Great Lakes.

The project requires investment at multiple levels of government. Illinois would share 35 percent of the cost, but state officials have made clear they can’t do it on their own. Flanagan said states can offer technical and financial assistance to move the project forward.

Asian carp were first introduced to the southern United States in the early 1960s and 1970s, according to the U.S. Fish and Wildlife Service. The invasive fish can consume up to 40 percent of its body weight in food each day, consuming the food of other native fish. The invasive species threatens the $7 billion fishing industry and $16 billion recreation boating industry on the Great Lakes.