“These people are us!” Proposed state laws provide more protection for immigrants.

By Isiah Holmes, Wisconsin Examiner - Aug 1st, 2019 12:40 pm
Get a daily rundown of the top stories on Urban Milwaukee 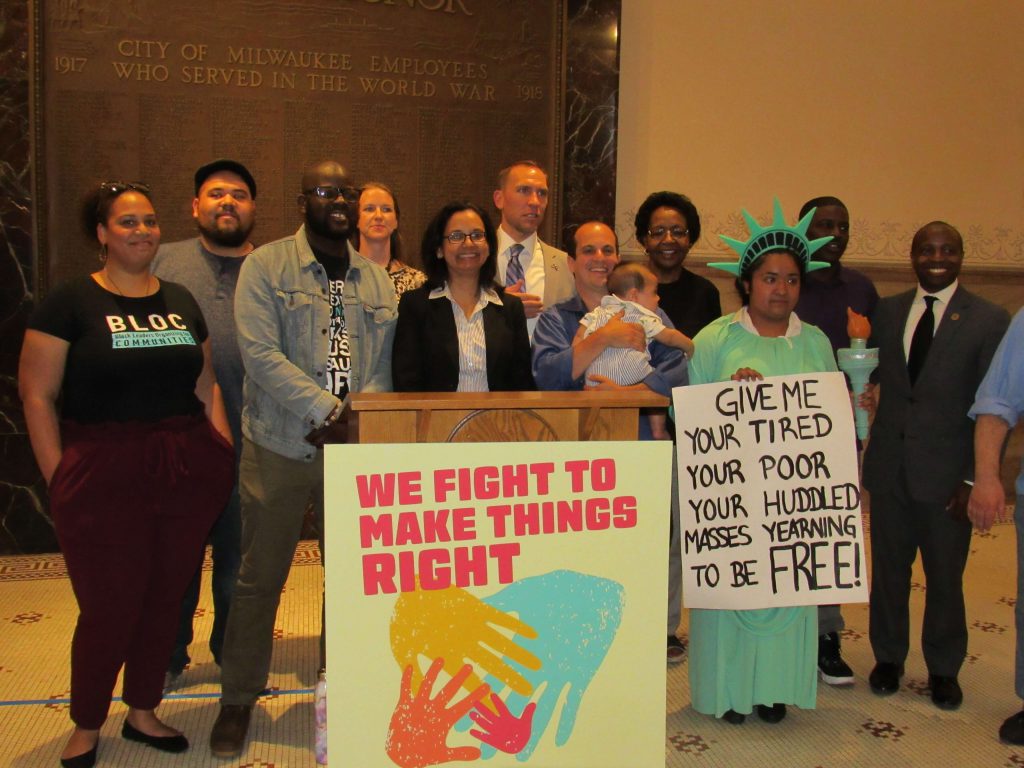 “It was a good show of support,” Cabrera told Wisconsin Examiner. “It was a good show of solidarity and brought together people not just from Milwaukee but from other cities in the state.” She denounced the federal government for “pursuing an agenda that is racially motivated and based on persecuting immigrants.”

Milwaukee County supervisor Supreme Moore Omokunde (Dist. 10) agreed, “The president is trying to dehumanize people,” he told Wisconsin Examiner. The proposed bills “reinvigorated the conversation that these people are us.”

Emilio De Torre, community engagement director for the American Civil Liberties Union (ACLU), said the bills–LRB-3233/3 and LRB-3246/3–do two key things: “They’re supporting the Wisconsin Idea by making sure that we are not ripping up families by creating privately run ICE detention centers here.” The bills also seek to create a “sanctuary model,” as De Torre put it, “whereby law enforcement isn’t going to work as a defacto subordinate to the Trump Administration’s ICE program.”

Immigration and Customs Enforcement raids have been an ever worsening issue since the Obama Administration. President Barack Obama deported a record setting 2.5 million undocumented immigrants by the time he left office. His successor, Trump, built a campaign on targeting immigrants, and pressing for a $21.6 billion southern border-wall.

Since winning the Oval Office, Trump has deployed thousands of U.S. troops to the southern border and called for increases in the U.S. Border Patrol. Recently, U.S. Customs and Border Protection opened an investigation after a private Facebook group was discovered that was filled with racist and sexist posts by current and former personnel. The Trump Administration has faced criticism for the conditions of facilities and camps, where children separated from their parents sit in squalor.

Trump also announced plans to confine some 1,400 migrant children at a US Army base. Fort Sill in Oklahoma was once used to detain Japanese-Americans during World War II. That plan is on hold, according to Oklahoma officials.

The historical parallels are what in part drew Alexa Safer to the rally. “I came out because I’m Jewish, and I feel like what’s happening is wrong.” Safer said. She decried Trump’s family separation policies, and the mistreatment of asylum-seekers. “People need to be able to come to our port of entry, and request asylum,” Safer said.

“I see the ICE raids as a copy of what happened in Germany to the Jews. They came into their homes and they raided them, and they took them and put them in camps,” said Safer, who is an organizer with both of Jews Against ICE and Never Again Is Now. “We as Americans shouldn’t be living in fear of our own law enforcement, and we already are.”

Milwaukee, like many cities, has been caught in the middle of a shifting political landscapes. Although its former sheriff and stanch Trump supporter David Clarke pushed for involvement in ICE operations, the newly elected County Sheriff Earnell Lucas has different priorities. “We don’t want to place a chilling effect on anyone in the community,” he said earlier this year, LA Times reports.

Monica, an organizer at the rally who passed out petitions, attested to this chilling effect. As a second grade bilingual teacher in Milwaukee, many of her students are either immigrants themselves or have immigrant parents. “I had three parents last year go through deportation proceedings,” she told Wisconsin Examiner asking that her last name not be used. “Kids came in crying after the election, it’s very heartbreaking. I have a little boy whose dad was deported. And when he found out his dad was deported he couldn’t concentrate in class.”

“Any law enforcement officer already has the right to arrest anybody who is committing a crime or breaking the law,” said De Torre. “There’s no need to make our immigrant and refugee populations hide underground because they’re worried about getting picked up going to the hospital, or going to school, or church.” Safer, who’s very active on social media, said she’s seen numerous posts by Wisconsinites whose relatives were detained or, “went to the store and just didn’t come home.”

De Torre said recent cases in Wisconsin of ICE agents pretending to be police officers, “discredits our men and women who are serving around the state.” The ACLU representative urged anyone being detained or approached by possible agents to not to speak to them, and to demand to see a warrant. Always make sure it’s “signed by a judge,” and is “not an administrative warrant,” he said.

Rep. Cabrera hoped the bills will, “ensure regardless of what your immigration status is, that your rights will be protected and observed.” She urged a shift in dialogue, saying  that in America, “We are not in the business of hunting down people based on what they look like and where they were born.”