By Robin Bravender, Wisconsin Examiner - Jul 31st, 2019 11:26 am
Get a daily rundown of the top stories on Urban Milwaukee 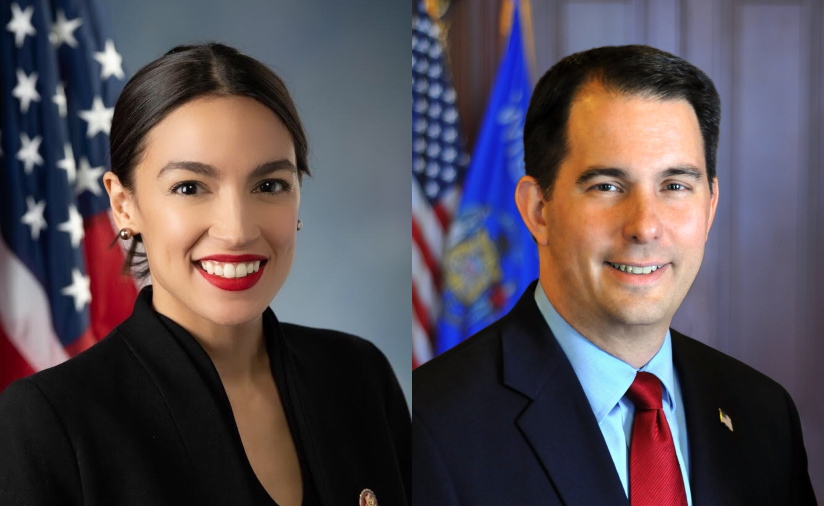 Speaking Monday night to a crowd of conservative students, Walker bragged about his Twitter spat earlier this year with Ocasio-Cortez (to whom he refers by her initials and Twitter handle, “AOC”).

Back in January, Walker mocked the freshman New York lawmaker’s suggestion that some of the wealthiest people in the United States pay tax rates as high as 70% to fund a “Green New Deal” plan to combat climate change.

Explaining tax rates before Reagan to 5th graders: “Imagine if you did chores for your grandma and she gave you $10. When you got home, your parents took $7 from you.” The students said: “That’s not fair!” Even 5th graders get it.

Then we taxed the billionaire in town because he’s making tons of money underpaying the townspeople. https://t.co/Wcnn2sEgek

He was speaking to the Young America’s Foundation annual conference for conservative students. Walker was elected president of the foundation earlier this month, a position he’ll formally assume in 2021.

Throughout his speech, “AOC” was a favorite punchline.

Walker said the Green New Deal, which she has been pushing in the U.S. House, “is neither green, nor a deal.”

He went on, “what she does is just about a big power grab. I mean the idea that you give jobs to people who aren’t willing to work is crazy.”

The Green New Deal, which was introduced as a non-binding resolution and hasn’t been adopted by the House, says that the federal government ought to guarantee “a job with a family-sustaining wage, adequate family and medical leave, paid vacations, and retirement security to all people of the United States.”

Walker pointed to the aspirational Green New Deal to criticize how far left the Democratic Party has moved ahead the 2020 presidential election.

After slamming the media and the tenure of President Barack Obama, Walker said, “these days, we see politicians like AOC.” He paused for laughter.

He said he was amazed earlier this year when Ocasio-Cortez said on Twitter that her generation “somehow has missed out on American prosperity. Really?” He told the crowd of students, “This generation is better off than any generation in the history of the world, and you’re not done yet.”

Ocasio-Cortez, who was born in 1989, told Time Magazine in March, “An entire generation, which is now becoming one of the largest electorates in America, came of age and never saw American prosperity. I have never seen that, or experienced it, really, in my adult life.”

Walker told the students he’s “absolutely optimistic about the future,” although he said he’s troubled by the amount of young people in the United States who say that socialism is acceptable.

“I always laugh when I go to campuses because I can tell the college Republicans usually have blue blazers and khaki pants on. The progressive student organizations usually look like they got mixed up and thought they were at the free pot seminar. And somewhere in between, there’s a lot of curious faces out there. … I think that’s the group we’ve got to get at.”

Walker’s last question from the crowd Monday evening came from a student who introduced himself to Walker as “an attendee of AOC’s alma mater, Boston University.”

Walker replied, “You in any dance videos?” — an apparent swipe at a dance video in which Ocasio-Cortez performed as an undergraduate at Boston University. The video was released by her critics in an attempt to damage her credibility, but the move instead endeared her to supporters.