Thrills on the Wells Street Viaduct

For 60 years streetcars rattled across the 2,085-foot-long bridge, 90 feet above the Menomonee River Valley. 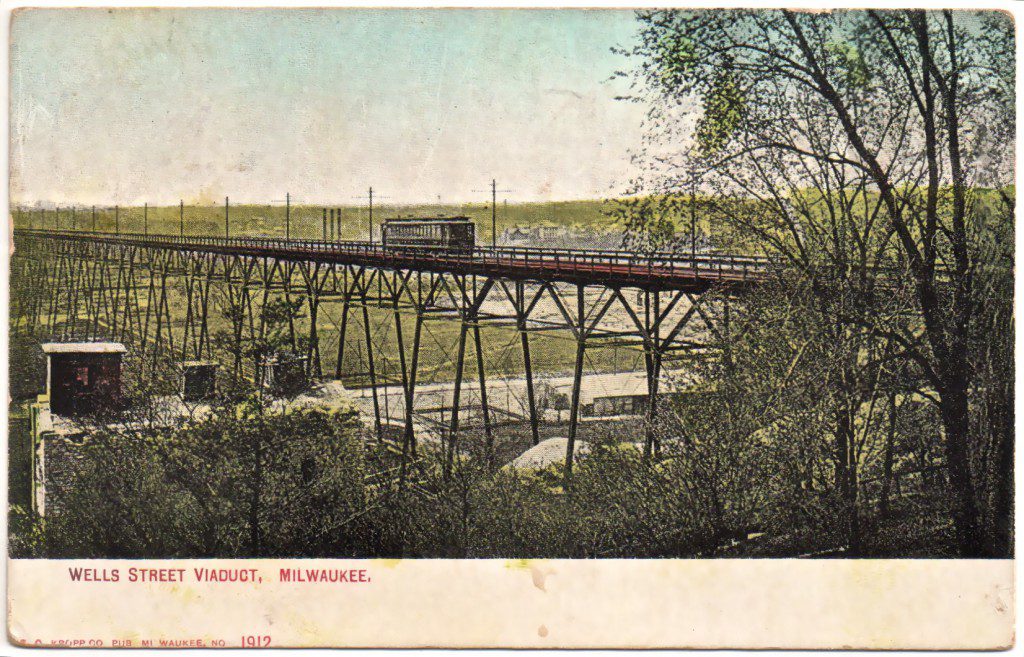 A postcard, dated 1909, shows a streetcar crossing the viaduct. The 2,085-foot-long Wells Street viaduct was the Milwaukee streetcar system’s greatest engineering feat. Built in 1892, it remained in service until the end of trolley service in 1958. Photo courtesy of Carl A. Swanson,

Enjoy this sample chapter from the book, Lost Milwaukee, by Carl Swanson, published by the History Press.

Nothing remains today, but for 60 years, the Wells Street viaduct was a Milwaukee landmark and the single greatest engineering achievement of the city’s once-vast streetcar and interurban empire.

As a thrill ride, albeit an unintentional one, the viaduct had few equals – especially when high winds buffeted the cars. Even veteran riders felt apprehensive as their streetcars rattled and swayed across the rickety-looking 2,085-foot-long bridge, 90 feet above the Menomonee River Valley. 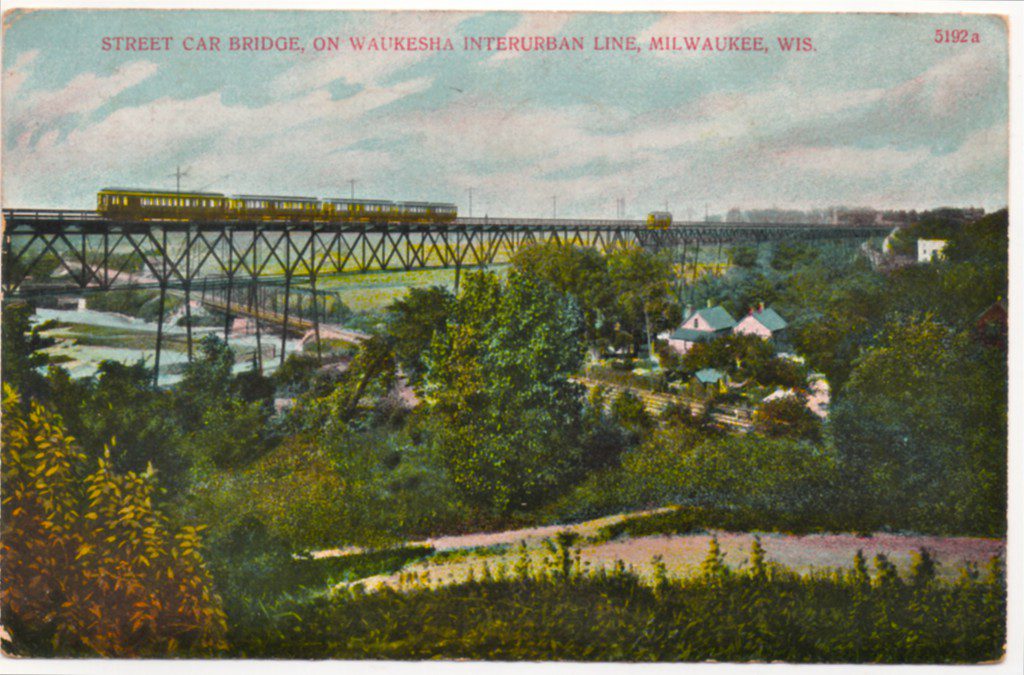 In this postcard view, a heavy four-car electric interurban train rolls across the Wells Street Viaduct in the early 1900s. Photo courtesy of Carl A. Swanson.

The Milwaukee & Wauwatosa Motor Railway Co. was formed in the 1890s to build and operate a three-mile-line between the intersection of North 36th and West Wells streets and West Main Street in Wauwatosa, along with a two-mile branch into West Allis. The Motor Railway awarded a contract in 1892 to construct the viaduct across the wide Menomonee Valley.

Although 1.3 million pounds of steel and a half-million pounds of timber went into its construction, many Milwaukeeans thought the bridge looked ridiculously flimsy. In fact, its Victorian-era designer, Gustave Steinhagen, relied on excellent engineering rather than overwhelming mass. His bridge was amply strong enough to accommodate even very heavy four-car electric interurban trains.

Built wide enough for two railroad tracks, the bridge opened with a single track and a one-lane toll road for pedestrians and wagons. The bridge was soon double-tracked, and the Motor Railway became part of the Milwaukee Street Railway Co. In 1897, the Street Railway and the several other privately owned lines merged to form the Milwaukee Electric Railway & Light Co.

Although the names of its owners changed, the giant bridge was always kept in good repair. In 1927, the structure was extensively rebuilt. Heavy plate girder sections replaced the original 60-foot-long truss spans. Supporting piers were also reinforced. The work resulted in state regulators approving an increase in the viaduct’s speed limit from 15 mph to 25 mph.

In 1938, Wisconsin Electric Power Co. took over operation of what was simply known as The Electric Co., which, in turn, operated streetcars under a subsidiary called, logically, The Transport Co.

Thanks to careful maintenance and cautious operation (for a time, signs at both ends of the bridge sternly reminded motormen they were forbidden to cross the valley in less than two minutes), there was never an accident on the viaduct, not even a minor derailment.

Certainly there were plenty of odd occurrences. The viaduct seemed to have an almost hypnotic appeal for drunken drivers. On several occasions inebriated motorists attempted to drive across the viaduct. Generally these adventures ended quickly and their broken vehicles had to be towed away before streetcar service could resume. On at least two occasions intrepid – and almost certainly stewed-to-the-gills – drivers made it all the way across, their cars bouncing along from one tie to the next high above the valley leaving a trail of shredded tire pieces for railroad workers to find the next morning.

On the night of June 7, 1946, a streetcar motorman spotted a fire in the 13-acre Hilty-Foster Lumber Co. yard located under the viaduct. He notified his dispatcher, who called the fire department.

The fire, possibly caused by an explosion of stored benzine, was already out of control when the first firefighters arrived and the blaze quickly grew into a five-alarm inferno destroying 4 million board feet of lumber, a box shop, planning mill, two warehouses, four lumber sheds, and 18 boxcars. Twenty-one fire engine companies and eight ladder trucks – more than half the city’s fire equipment – fought the fire.

Surrounded and at times almost hidden by swirling flames, the viaduct’s wooden deck soon ignited and, after burning for hours, collapsed into the valley below. Streams of water played on the burning bridge caused the super-heated steel to warp and twist. Service was suspended for five days while an army of workers from the Transport Co.’s Way and Structures Department repaired the damage.

The Transport Co. completed the change to buses in late 1957, but streetcars continued to serve the Wells Street line into early 1958. It was a temporary reprieve caused by uncertainty over the continued control of the viaduct. The wording of the original property easements clearly specified the viaduct was for streetcar use. Realizing the legal justification for the viaduct’s existence ended the instant the last streetcar rumbled across, the company kept the Wells line going a few additional months while it pondered its options.

The Menomonee River Valley was a major bottleneck for east-west traffic in the years before the freeway system. Running transit buses over a rebuilt viaduct seemed an appealing option for a time, but nothing came of it.

Finally, on March 2, 1958, the Wells cars made their final runs. The viaduct remained in place for a few years while the city considered a plan to covert it into a vehicular bridge for a proposed east-west highway. The completion of the Interstate ended this idea and bridge was dismantled in 1961-62. 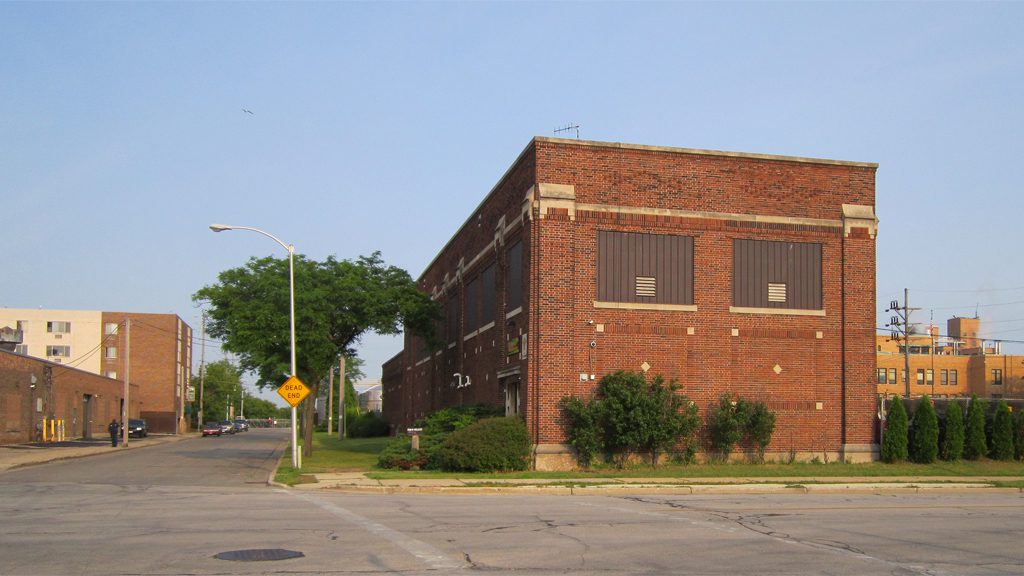 This former Milwaukee Electric Railway and Transportation Co. electrical substation still stands at the intersection of 36th and Wells. The road at left leads to the east end of the former viaduct. Photo courtesy of Carl A. Swanson.

9 thoughts on “Lost Milwaukee: Thrills on the Wells Street Viaduct”