A $1 Million Fund To Support Northwest Side Startups 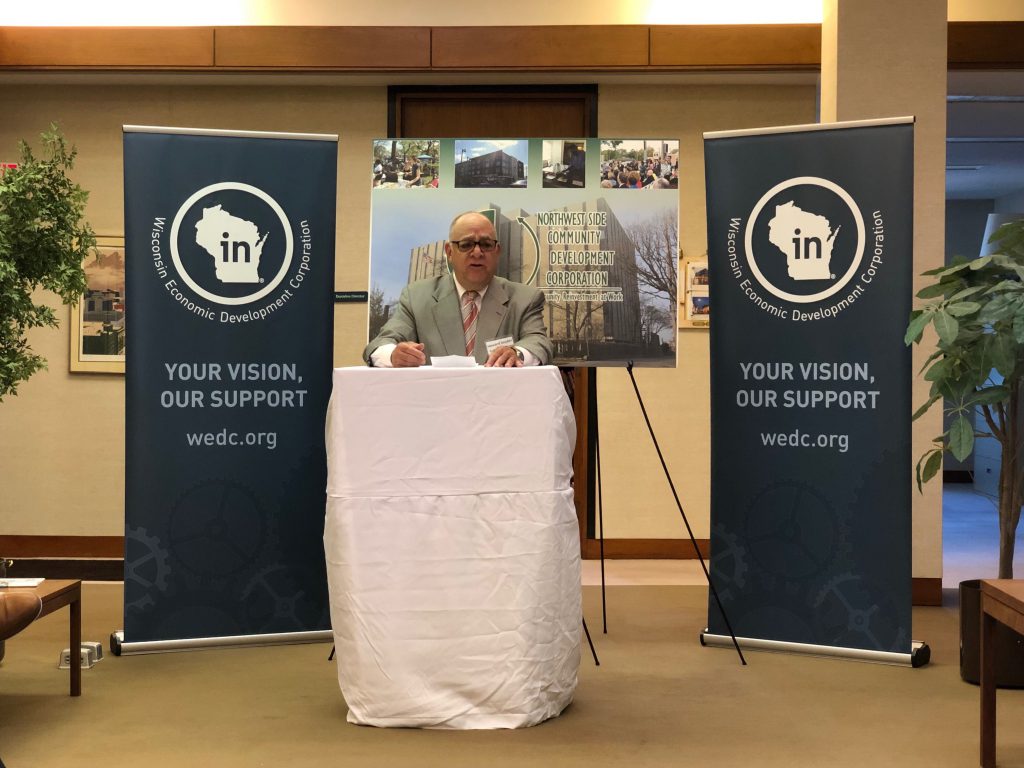 The non-profit Northwest Side Community Development Corporation (NWSCDC) now controls a $1 million loan fund targeted at startup and early-stage companies. The fund, targeted at firms in working in power and energy, food and beverage and water technology clusters, is slated for businesses that are generating revenue, but not yet profitable.

“This is a very exciting day here in the city of Milwaukee, and we need to make sure there are more exciting days,” said Lieutenant Governor Mandela Barnes at a press conference announcing a $500,000 state grant to support the effort. The event was held in NWSCDC’s offices, located in the former Eaton Corporation corporate suite on the 7th floor of what is now Century City Tower at 4701 N. 27th St.

“Unfortunately this area isn’t always recognized for the greatness that lies within it,” said Barnes, who grew up nearby in the 53206 zip code known for having the highest incarceration for African American males in the United States.

Assembly Representative David Bowen said the fund will be focused on companies going from two to three employees to six to 10. “I hope this is just the start of many more dollars that will be introduced in the future,” said Bowen.

NWSCDC, founded in 1983, is led by Howard Snyder. “I have seen the growth of this neighborhood. I have seen its decline. Frankly, it’s been a mixed bag,” said Snyder. The director told the audience that the loan fund reflects a change from simply chasing deals around job replacement following the closure of Tower Automotive to focusing on wealth creation in the community. Snyder said the new fund allows the flexibility to make loans to small companies that desperately need the cash versus big firms that he believes at times don’t need the financial support.

The state-controlled Wisconsin Economic Development Corporation (WEDC) is supporting the creation of the fund with a $500,000 grant, matching $500,000 NWSCDC has already raised. NWSCDC’s director of lending Willie Smith said the organization raised its half of the funding from federal Office of Community Services grants and “patient capital” from area banks.

Smith said that patience and flexibility is the key to getting deals done. “With this fund we have the flexibility to work with the businesses on the repayment rate,” said Smith.

The state funds are from the WEDC’s Capital Catalyst program focused on capital formation and investment in emerging growth companies. The program provides matching grants to seed funds managed by local communities.

Snyder praised outgoing WEDC director Mark R. Hogan, a holdover from Scott Walker‘s administration, for his work. “We haven’t always agreed with everything, but your integrity and commitment to this state is unparalleled,” said Snyder. Hogan was in attendance, but did not speak.

Also in attendance were brothers Que and Khalif El-Amin who lead Young Enterprising Society (YES). The organization, located in the Century City Tower building, leads a business accelerator program known as The Blueprint that seeks to build and encourage entrepreneurship, particularly among minorities. The organization and its participants received an acknowledgment from many of the speakers. “What a great day to announce investments into companies that are young, black and talented,” said Bowen.

Recent YES participant Chantel Teague, founder of StyleQ, received a special acknowledgment from Smith as just the type of entrepreneur the fund would seek to empower. Her online platform is designed to help individuals book beauty and healthcare specialists based on their own unique profile.

Bemoaning the culture of always trying to do more with less, Snyder concluded: “today, we can do more.”