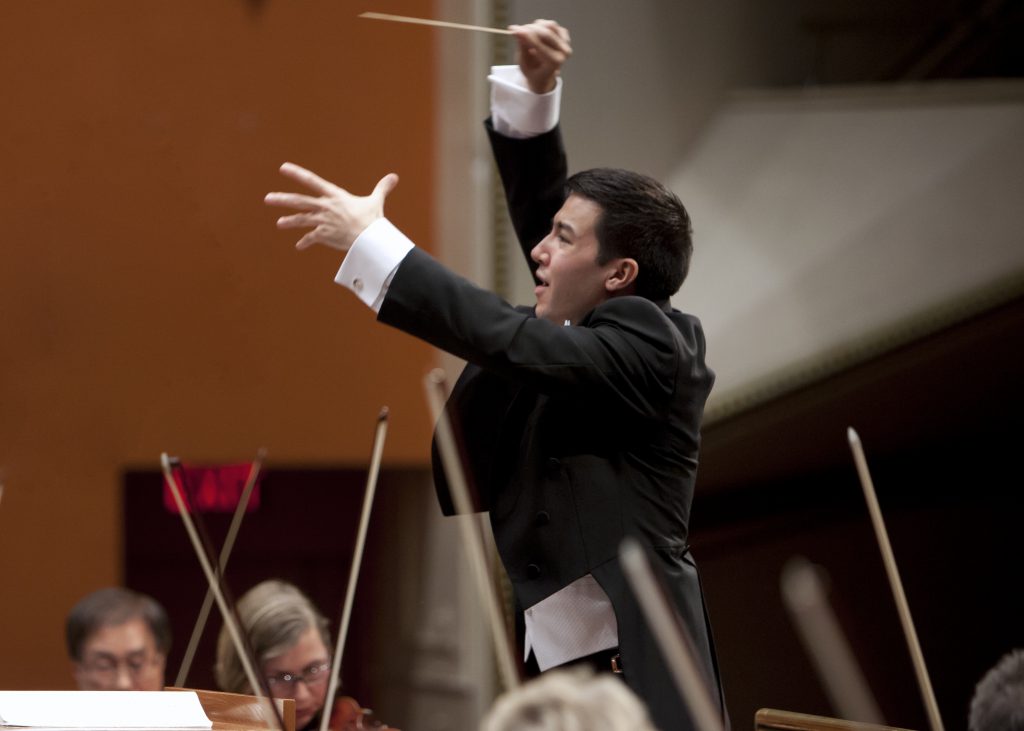 In another compelling evening of programming for the Milwaukee Symphony, John Adams’s apocalyptic Doctor Atomic Symphony (constructed from material from his opera Doctor Atomic) sat side by side with Carl Orff’s Carmina burana. The result was a concert full of drama, intensity and a pervasive theme of fate.

In the last couple years I’ve been fortunate to hear some fine performances of John Adams’s music in Milwaukee, from the Symphony’s Harmonielehre in 2018 to Present Music’s outing with Son of Chamber Symphony just a few weeks ago. Among contemporary American composers, John Adams has one of the best shots at becoming standard rep, and it seems like things are really falling into place. In a spoken introduction, conductor Francesco Lecce-Chong expressed his desire to return to Milwaukee specifically to conduct Adams, after serving as associate conductor to Edo de Waart.

Doctor Atomic Symphony immediately set the tone for the night with its portentous opening brass blasts. The MSO brass section has really been on a hot streak, and I relished the heroic sound from the horns in particular. Maestro Lecce-Chong aptly managed the simmering tension of the short first movement, “The Laboratory,” and the strings roared to life in running passages in the second movement, “Panic.” At the first big climax of this movement, the orchestra achieved a shiver-inducing volume. Maestro Lecce-Chong’s conducting favored sharp, severe gestures that were very effective at big moments but generally seemed more intent on guiding the whole orchestra through this tricky score than gelling individual elements. During some more meditative sections in the second movements, I felt the music losing some of its shape, with lovely scattered details but a blurred picture of the whole. This may be partially the fault of the music, which does sag a bit in mid- movement. But the opening of the third movement, “Trinity,” was about as cool a moment as you could ask for in a contemporary orchestra performance: Burbling woodwinds, strings spiraling down, brass choirs murmuring to each other in increasing urgency, bowed percussion notes that sounded almost electronic. It was terrifically exciting to hear live. Trumpet player David Cohen delivered a wonderful interpretation of the subsequent transcription of the aria “Batter my heart, three-person’d God” (sung in the opera by a baritone). As a final signal that perhaps Adams has become mainstream, the audience greeted this work with a genuinely enthusiastic standing ovation. How often does that happen to a contemporary work on the first half of a concert?

I had never heard Carmina burana all the way through until this concert, though I was quite familiar with the “O Fortuna” movement (as many a lay-listener may be). After hearing the whole piece, I have to say this is pretty great music. Orff’s vocal and choral setting of medieval writings both serious and silly, festive and tragic, forms a really colorful picture of medieval social life and a timeless meditation on fate.

“O Fortuna” delivered a hefty sound, enveloping Uihlein Hall to the point of mild distortion. The next two choral sections evoked a medieval aesthetic with stark, chant-like phrases. In the first baritone solo, “Omnia Sol temperat,” Hugh Russell’s performance was earnest and vulnerable. He has sung this piece with at least 10 other orchestras, and I think he realizes the importance of this movement as the first individual expression, after the stoic masses in the choruses. In a series of festive sections about the return of spring, Maestro Lecce-Chong gave the musicians big gestures that provided big results. His clear, straightforward style was well-suited for this music. Movement after movement burst forth with effective music, though in some recurrent choral “Ahs,” I heard some flatness of pitch in the sopranos.

The second big movement titled “In the Tavern” created an abrupt mood shift. A baritone solo ended with the hedonistic proclamation “I am eager for the pleasures of the flesh more than for salvation. My soul is dead, so I shall look after the flesh.” This set the stage for the boisterous tavern-centered material that followed. Tenor Derrek Stark brought great facial expressions and appropriate hamminess to “Cignus ustus cantat,” sung from the perspective of a swan roasting on a spit. And what a powerful, room-filling voice! Russell returned for his best moment yet, the drunken “Ego sum abbas (I am the abbot)”, where his characterization was pitch-perfect, all the way to the end when he sloppily plopped himself back into his seat. The two men really sold these solos, and the audience fully embraced the humor. I might have seen a few proud Milwaukeeans raising a cup of wine in solidarity.

In the movement “The Court of Love,” the choral section “Veni, veni, venias” drew a connection to John Adams; the piano grooves sounded like a direct influence on Adams’s opera Nixon in China. The first appearance of soprano Sarah Shafer in “Amor volat undique” was sweet and delicate, but a tad quiet. I heard some unsteadiness at times in her other solos; perhaps having an off-night? Another festive highlight was “Tempus est Iocundum”; if you’ve heard the song “When You Believe” from the animated movie The Prince of Egypt, this movement is the musical DNA for the middle section of that song.

The indefatigable Maestro Lecce-Chong, after a full concert of aerobic conducting, still saved perhaps his largest motions for the sustained climax of “Blanziflor et Helena.” The resulting sound was massive. In the closing reprise of “O Fortuna,” the timpani in particular caught my attention. Some of their accented strokes had a sense of rightness and inevitability that really enhanced the moment.

The more I think about this pairing of Adams and Orff, the more fascinating I find the contrast. Orff’s deeply human celebration of love, the outdoors, and pleasures of the flesh felt more fragile after Adams’s essay on the terror and anxiety of nuclear warfare. And when “O Fortuna” came around again, I thought about our choices and the forces beyond our control that write the story of humanity.