Buses have improvements for riders, bus drivers and other road users. See our photos.

Your other set of wheels just got an upgrade.

The Milwaukee County Transit System unveiled 28 new buses Thursday morning that offer a host of benefits for riders, bus drivers and those driving near buses. The new vehicles are more fuel efficient and produce less exhaust.

Riders will enjoy new anti-slip flooring and exterior bus signage that is intended to be easier to read, said a system representative. The buses, continuing a trend for other recent vehicle purchases, have fewer seats than those they will replace in favor of expanded space for strollers, accessibility devices and standing passengers.

Bus drivers, who are locked in an acrimonious contract battle with the county, will find bigger front windows and heated mirrors to help melt snow and ice. “A lot of things you see in the bus, heated mirrors, come from their suggestions. We value their input,” said MCTS director of maintenance Ron McCorkel.

Made in California by Gillig, the buses also feature a key benefit for those not riding or driving on them. New turn signals are included on the side mirrors to help make their movements more predictable.

“The circumstances we have to work with are not what we would like them to be,” said Milwaukee County Executive Chris Abele, speaking of the county’s transportation budget. The system, which relies heavily on state aid, is facing a 10 percent cut. State support, for both mass transit and paratransit, has been flat or declining almost every year for the last decade. Abele said it’s important to continue to make the case to state officials that MCTS is an economic driver for the county.

So why buy buses now? MCTS seeks to have a steady replacement cycle for its approximately 400 bus fleet. The new buses will replace 14-year-old vehicles with approximately 700,000 miles on them. And the MCTS service cut might not be permanent. “We don’t know what’s in the budget for next year,” said MCTS director Dan Boehm. The new vehicles feature a stainless steel chassis better designed to prevent corrosion from salt than those they’re replacing.

The new buses will also use less diesel fuel, a key factor for a system that runs for approximately 18.3 million miles annually. Vehicles from the last purchase in 2017 get 5.85 miles to the gallon said McCorkel, a substantial improvement from the three miles per gallon vehicles that MCTS previously attained. He said the new vehicles should get at least 5.85, if not six, miles per gallon due in part to an improved transmission that will adjust to driver tendencies. They’ll also generate less exhaust through improvements in diesel technology.

How much does all of this cost? $472,000.95 per bus said McCorkel. The 14-year-old buses they’ll replace cost approximately $275,000. Why the increase? “If you bought a car 14 years ago you would be hard pressed to replace it for the cost,” said McCorkel. He said clean diesel technology and other adjustments added to the cost.

The buses, which look similar on the interior due to MCTS bidding requirements, are the first Gillig brand buses purchased by MCTS in more than 17 years. Boehm told Urban Milwaukee that Gillig not only had the lowest bid, but the best technical score. The rest of the MCTS bus fleet is made up of Minnesota-made New Flyer buses.

County Supervisor Supreme Moore Omokunde, who lives across the street from the system’s W. Fond du Lac Ave. maintenance facility and headquarters, said: “We want to make sure public transit works for those who ride it and those who operate and maintain it.” Moore Omokunde and his colleagues will need to review and approve the final budget introduced by Abele.

The first 10 vehicles will hit the street tomorrow. Besides the substantially different front windows, you’ll be able to identify them by their vehicle numbers. The new vehicles are numbered 5900 and up. An additional 23 buses are planned for delivery next year. 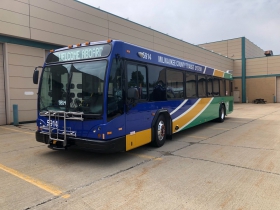 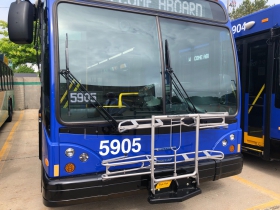 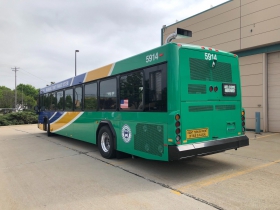 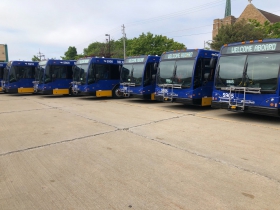 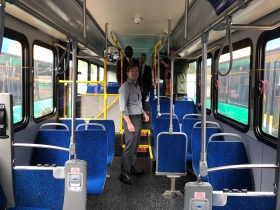 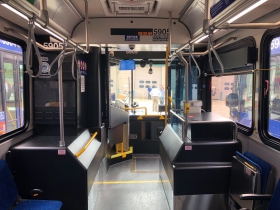