By Danielle Kaeding, Wisconsin Public Radio - Jun 4th, 2019 11:58 am
Get a daily rundown of the top stories on Urban Milwaukee 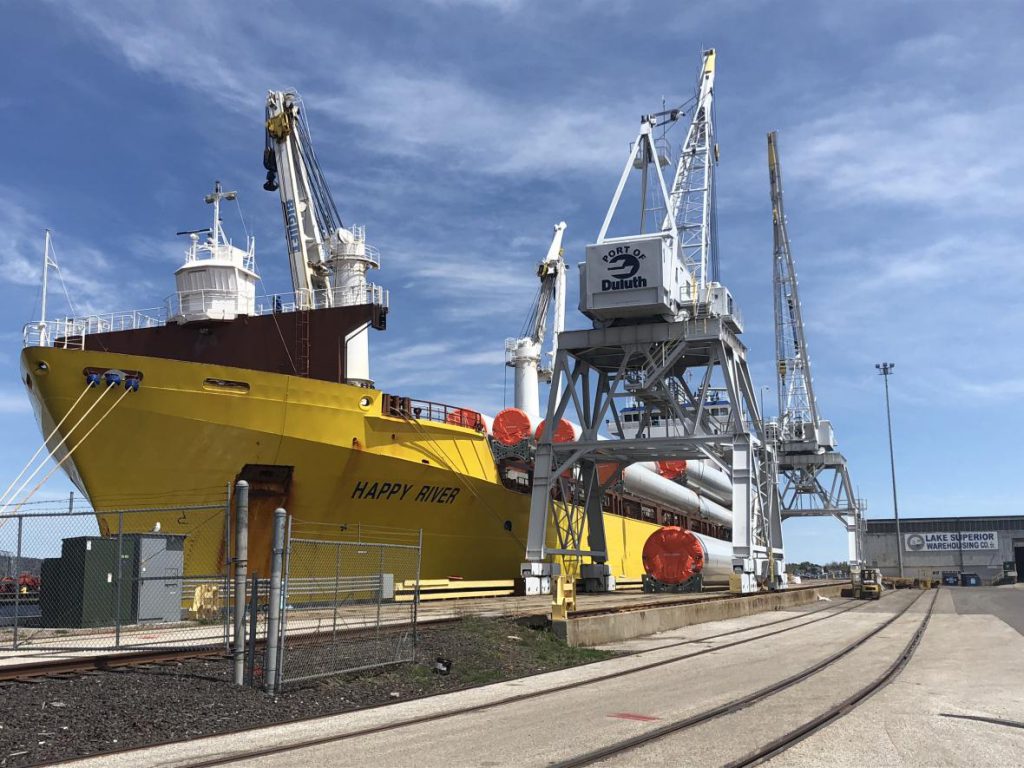 Wisconsin and the nation are seeing increased interest around wind energy. The declining cost of wind production and utilities that are pledging to reduce carbon emissions are playing a role in wind developments.

In the Twin Ports, wind turbine shipments are expected to be up after a lull last year, according to Jayson Hron with the Duluth Seaway Port Authority. He said they’ve already seen two shipments of tower components.

“In addition, the blades are coming in soon,” he said. “We’ve got our first shipment expected in early June.”

Hron said they expect about 15 ships from overseas carrying wind cargo for projects out west this year.

This influx underscores how, well, the wind is blowing.

John Hensley, vice president of research and analytics with the American Wind Energy Association, said just under 40 gigawatts of wind projects are being developed or constructed across the country.

“Which is pretty phenomenal given that at the moment, we’ve got 96 gigawatts, which to put that into context is enough power to serve about 30 million American homes,” he said.

The U.S. wind industry announced 6,146 megawatts of new capacity in the first three months of this year.

“Those three prospects account for about more than 300 megawatts of wind generation,” said Vickerman. “To put that in perspective, that’s about 40 percent of what’s operating today in the state of Wisconsin.”

Wisconsin currently produces around 737 megawatts of wind, which is about 3 percent of the electricity generated in the state. Vickerman said the state permitted a number of wind farms about a decade ago before the state adopted its wind siting rule.

Since then, the Walker administration and Republican lawmakers challenged the law, seeking to increase the distance between wind projects and homes, which discouraged some developers.

PRC Wind of Minneapolis recently filed an application with Grant County to construct 100 megawatts of wind energy with its Red Barn project in Montfort, Wisconsin. Also, among the three projects currently being considered is the proposed 65-megawatt Sugar River Wind Project that has prompted controversy and opposition among some residents in Green County.

“This is the first project to go through the wind siting rule,” said Vickerman. “So far, the process seems to be holding up, but the true test of how that policy works or how that process works will be whether in the end Green County approves the project.”

Xcel Energy announced recently its plans to be coal-free by 2030 and extend the use of its nuclear power plant in Monticello, Minnesota, while it invests in wind and solar energy. Madison Gas and Electric has pledged to produce net-zero carbon electricity by 2050. The utility has grown its wind capacity from 11 to 153 megawatts over the last decade, according to its website.

Both Vickerman and Hensley agreed demand from utilities and the declining cost of wind production are factors driving interest. Hensley said the cost of wind has come down dramatically since 2009 with power purchase agreements between a wind project and the buyer of electricity at prices around $20 per megawatt hour or 2 cents per kilowatt hour.

“One of them is certainly the stable policy environment that we have at the national level with the five-year phase-out of the production tax credit, which is the primary federal incentive for the U.S. wind industry,” said Hensley. “This is the last year to qualify for that tax credit.”

Texas is constructing the most wind capacity so far this year, according to the association. In the Midwest, Wisconsin trails behind neighboring states Michigan, Minnesota and Iowa in wind production.