The Sheer Power of Music 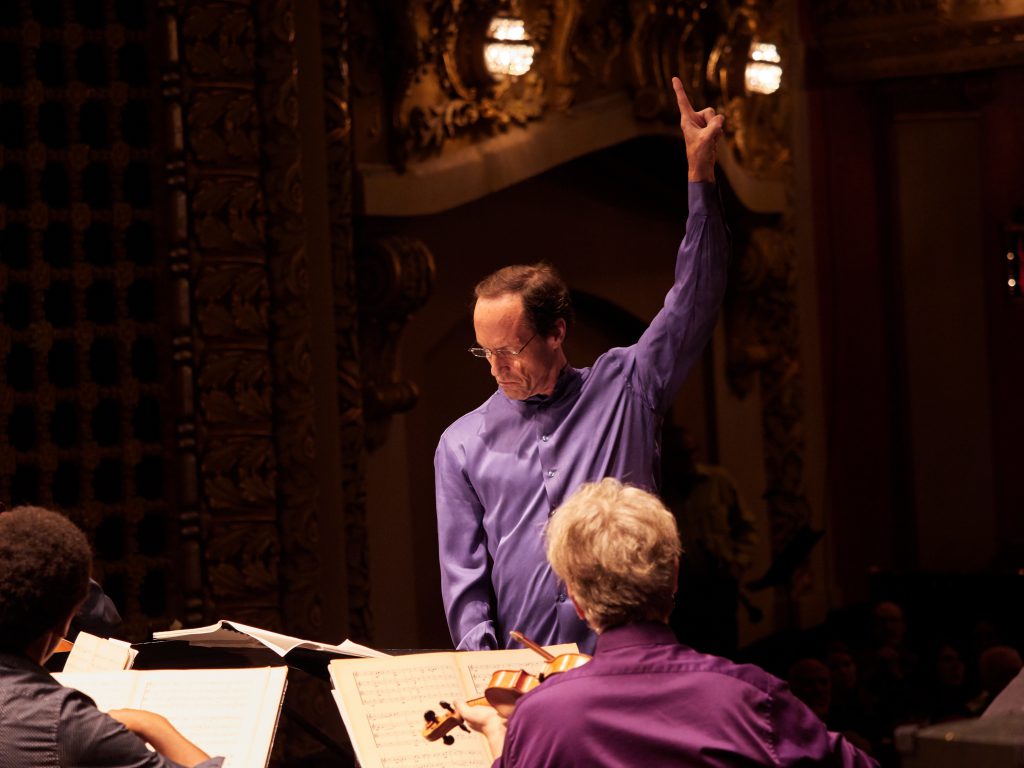 I left Saturday night’s Present Music concert feeling very hopeful about the future of contemporary concert music in Milwaukee. This was not just any night; artistic director and conductor Kevin Stalheim was taking his final bow with the group he founded, after 37 years overseeing the series and creating collaborations with hundreds of composers and musicians. The night was as packed with significance as the Pabst Theatre was packed with people. The concert program included dozens of well-wishes from friends and colleagues, and, at various points during the concert, video messages from different musicians expressed the impact Mr. Stalheim has had on their lives. By the end, it was quite overwhelming to reflect on the impact that one man has had on the cause of new music. As a composer myself, I’m pretty invested in this scene, and the evening seemed to serve as Mr. Stalheim’s final essay on the topic, the final argument for why this music matters. And quite honestly, even without the inherent drama of the final concert, the musical program would have been enough to compel any newcomer.

John Cage’s Apartment House 1776, written for the American bicentennial, immediately got us all on a wavelength of joy and togetherness. The lights came up to reveal groups of singers and instrumentalists all around the theatre, and they started to make music in various combinations. I heard snatches of church hymns, military tunes, gospel music, Native American drumming and chant, and more; it represented a cross-section of music that would have been heard around the colonies during the Revolution. The patchwork of music was ecstatic and deeply human. Charles Ives, that early American pioneer of musical collage, would have loved this piece. It also provided a showcase for local Milwaukee talent, including groups like the vocal ensemble Aperi Animam and folk duo Fox and Branch.

Next came Village Idiot by Elena Kats-Chernin, which Present Music had premiered in 2007. Though a tad long for my taste, this large-ensemble chamber piece was still a fun ride. Tight grooves in 5/8 offered a nice contrast from the floating qualities of the Cage. The colorful instrumentation included accordion (played by the inimitable Stas Venglevski), electric guitar and synthesizer.

I was surprised and delighted by the final selection on the first half: a dance piece choreographed to the well-known Emperor Waltz by Strauss, arranged by Arnold Schoenberg for chamber ensemble. The dance, entitled “Potluck,” featured four women cleaning and table-setting, and slowly evolved into a great feminist commentary. Several times, the dancers pulled Mr. Stalheim away from conducting to join in the choreography. They wrapped him in a sheet, played a sort of game of musical chairs, and in the final moment Mr. Stalheim grabbed a handful of cake from a table and stuffed it in his mouth. The piece was genuinely funny, and the dancers adeptly conveyed the humor through well-timed glances and snarky gestures. There was an element of contagious fun in hearing well-trodden music and seeing some traditionally beautiful choreography in colorful, whirling dresses, while also witnessing a narrative that turned expectations upside down. It was a great example of the value of mixing old and new, and reframing the familiar in a new context. 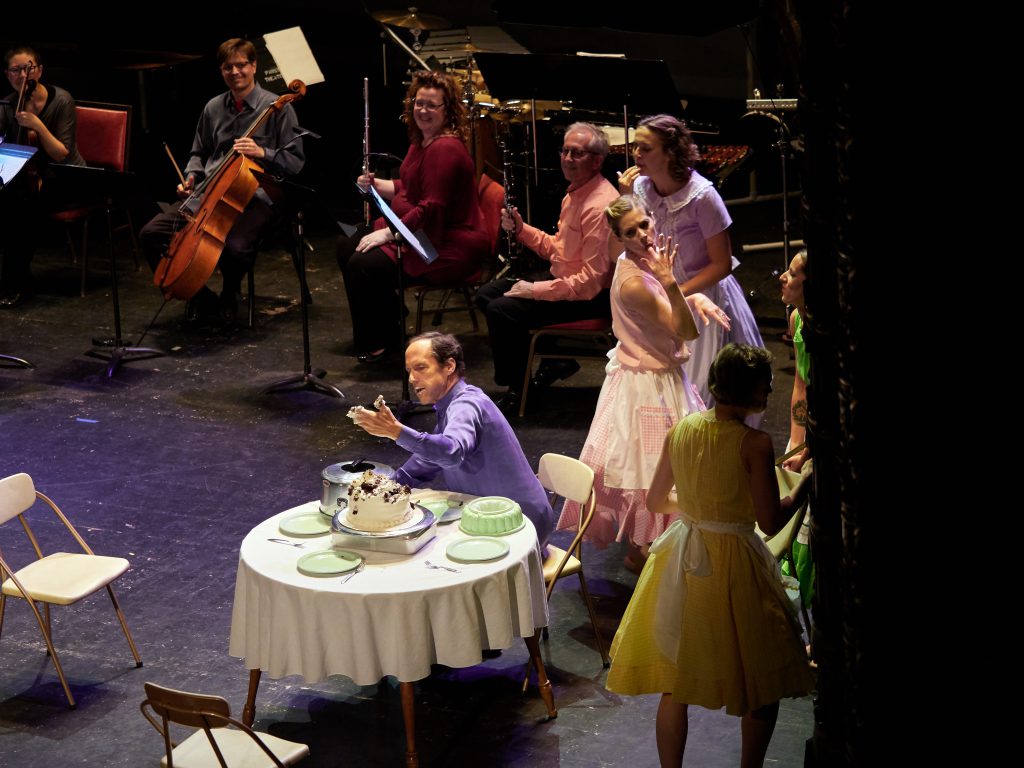 After intermission, we were treated to twin video messages from composer Kamran Ince and violinist Eric Segnitz, both longtime friends of Mr. Stalheim. Mr. Ince had written a prelude for solo violin on the occasion of Mr. Stalheim’s departure, which Mr. Segnitz then played in his video. The piece was beautiful, concise, and effective. I hope it finds its way into the wider world.

John Adams’ Son of Chamber Symphony was well placed to lift spirits after the emotional heaviness of the previous moment. This piece is full of infectious grooves and amazing transitions. The first movement sounded at times like the seams were starting to pull apart; admittedly, this is extremely challenging ensemble music. In the second movement, I heard a beautiful oboe solo by Erica Anderson. Mr. Stalheim guided some nice long lines in the music. In the third, rhythms were crisp and each line sparkled. Just great. I wished I could have teleported various friends into the hall to hear that live performance moment.

After the Adams, the audience was rustling, talking, laughing, having a great time. I heard a conversation behind me in which someone was telling her friend: “Oh, this next piece…you are in for a treat!” Apparently Present Music had programmed this piece, Souvenir by Donald Erb, in a concert far in the past. But some of the hardcore fans of the series remembered it. I was really touched by this. How often does this happen in concert music, that loyal fans remember concerts from decades ago and take such joy in the anticipation of hearing certain works again?

When Souvenir finally started, I could see why it was so memorable.

The music started in total darkness. Suddenly a shift in lighting illuminated prostrate bodies all over the stage, wearing black skintight suits with various stripes and dots of neon colors. I was reminded of Sufjan Stevens, who employed similar neon costumes for his Age of Adz tour. I heard loud, delighted gasps from the audience. The bodies moved. Glow-in-the-dark balls bounced around the stage. Instruments around the hall began to swell into a frenzy. The lights came up. A giant inflatable ball with the word FUTURE bounced into the audience. In an image worth one thousand words, the ball only made it halfway to the back before it popped, perhaps from too many enthusiastic hands keeping it aloft. The audience groaned with dismay, and then cheered when a new FUTURE ball emerged. The people in neon suits ran through the aisles spraying silly string and fluorescent-painted ping pong balls. All through this action, the music continued to grow in crazy abandon, and suddenly it was over. 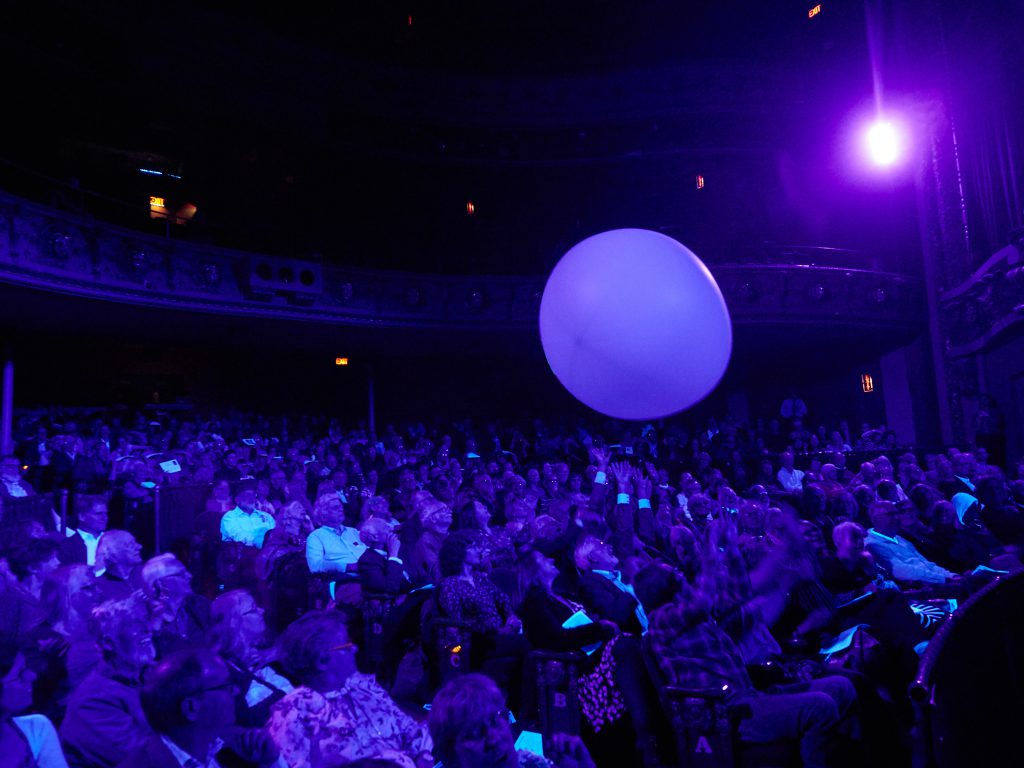 Contemporary concert music in the twentieth century and beyond has a huge inherent capacity for playfulness, courage, participation and danger. All of that was on display at Saturday’s concert. The opener and finale were of the breed that don’t sit contentedly on a stage but instead reach out and shake our shoulders to see if we’re still alive. They give us glimpses of an ecstatic utopia that might seem alien to us because we keep forgetting our shared humanity.

The next season of Present Music will be co-directed by (extremely talented) conductor David Bloom, who has made many appearances on this series before, and Eric Segnitz, veteran violinist with the group. I know the series will continue to create great music in Milwaukee, but after this evening I was struck by the phenomenal, singular impact of Mr. Stalheim’s vision over the last few decades.