And he’s considering running for governor or a third term for senator in 2022.

By Corri Hess, Wisconsin Public Radio - Jun 2nd, 2019 06:47 pm
Get a daily rundown of the top stories on Urban Milwaukee 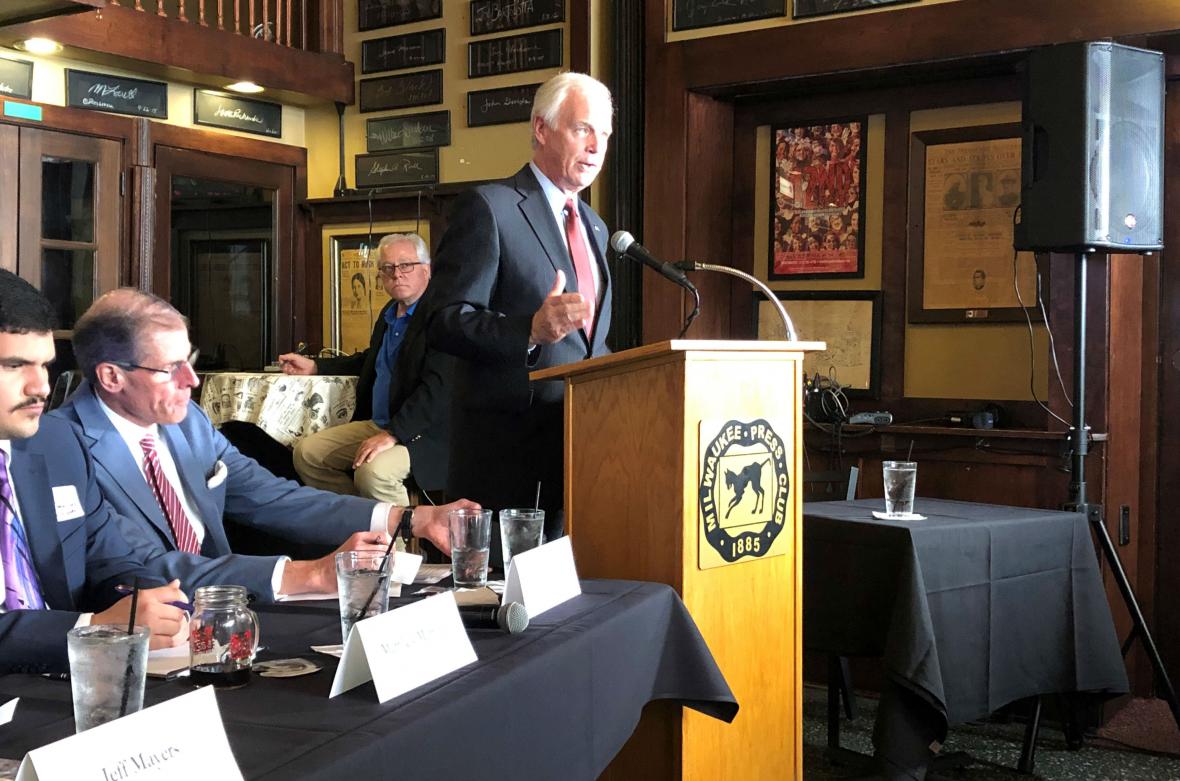 U.S. Sen. Ron Johnson, R-Wis., said on Friday that he would support President Donald Trump‘s 5-percent tariff on all goods imported from Mexico if the president uses the measure as a negotiating tool to secure the border.

Johnson, a longtime businessman, has been a vocal opponent of the Trump tariffs. During an interview Friday at the Milwaukee Press Club in the city’s downtown, Johnson said he met with the president last week and would consider agreeing with the Mexico tariffs for the short term.

“The president knows my opinion on tariffs, which are taxes on American consumers,” Johnson said. “What President Trump has done with tariffs is use them as leverage either in trade negotiations or now this. I’m hoping that is what this is, is just leverage.”

“Accordingly, starting on June 10, 2019, the United States will impose a 5 percent Tariff on all goods imported from Mexico. If the illegal migration crisis is alleviated through effective actions taken by Mexico, to be determined in our sole discretion and judgment, the Tariffs will be removed. If the crisis persists, however, the Tariffs will be raised to 10 percent on July 1, 2019,” the statement read.

In February, Johnson said that Trump’s tariff strategy has brought countries like China, Canada and Mexico to the negotiating table, but said the president should lift the increased taxes on Mexico and Canada.

Now, it looks as if Johnson is willing to support increased tariffs on Mexico to move forward the U.S. homeland security agenda. Johnson chairs the Senate’s Committee on Homeland Security and Governmental Affairs.

The senator is pushing for the U.S. to enter into a “safe third country” agreement with Mexico, which would reduce Central American migration. The U.S. has had a similar agreement with Canada for almost 20 years.

“Bottom line is, if you’re really fleeing danger, if you’re seeking asylum, you should seek it in the first country that is safe, which is Mexico,” he said.

Johnson has met with the Mexican ambassador and foreign minister, but so far, the country hasn’t agreed to this, he said.

Besides tariffs and border security, the major issue consuming Washington, D.C., this week was responses to former special counsel Robert Mueller‘s public statements regarding the completed investigation into Russian interference in the 2016 election.

Johnson said Congress’ responsibility to investigate what happened leading up to the presidential election and the days that followed was bypassed by the special counsel.

“Congress should have been given full access to information to do our investigations and to hold our hearings and issue our reports as to what happened with President Trump, his administration and potentially Russia,” Johnson said. “The problem with the special counsel is we lose access to information.”

The senator said he isn’t questioning Mueller’s integrity, but he was the wrong person for this investigation.

“It’s unfortunate (that) Mueller muddied the issue right now,” Johnson said. “Very good clarity on the no collusion. But unfortunately, it’s going to just continue. It’s just going to be investigations and talks of impeachment.”

Johnson, who said it’s probably an accurate statement that Russians interfered with the election, said he believes U.S. House Speaker Nancy Pelosi will be pressured to move forward to call for impeachment of the president.

Johnson was first elected to the U.S. Senate in 2010 and re-elected in 2016. At the time, he said it would be his last election.

But recently, he has been talking about extending his future in politics, including another run for Senate or even governor. Johnson said on Friday he is being “highly encouraged” by his party to consider both positions in 2022.

He said he won’t make any decisions until after the 2020 election, but he said that “Looney Tune” policies and far-left Democrats, including U.S. Rep. Alexandria Ocasio-Cortez and U.S. Sen. Bernie Sanders, factor in his decision.

“The reality has changed,” Johnson said. “I thought the House was our firewall. Now, it’s looking like maybe the U.S. Senate is our firewall.”

Milwaukee landing the Democratic National Convention in July 2020 will be an economic boon for the city, Johnson said. It will also be an opportunity for Republicans to poke holes in Democratic policies, he said.

Johnson said what has gone wrong in Wisconsin for Republicans has been not enough attention was paid at the grassroots.

“A real key is a state party whose primary function is supporting the county parties that are all about getting the votes,” Johnson said. “Conservatives have not done a good job of fielding a candidate for every line on the ballot. Thirty Democrats ran unopposed. This is about county boards, city councils, school boards and mayoral races. We need Republicans on every line of the ballot. Those are the ground troops.”