Is State a Leader in “Economic Freedom”?

So says a Cato Institute report. There’s reason to doubt this.

Last week’s Data Wonk column looked at the Freedom House measures of freedom and evidence that democracy is on the defensive globally, in the United States, and in Wisconsin. Undermining democracy, the Wisconsin legislature and former Governor Scott Walker tried to entrench themselves by gerrymandering legislative districts, by attempting to tie the hands of the incoming governor and attorney general, and by adding barriers to voting that targeted populations that traditionally support Democrats.

The Freedom House measures are basically political, covering the ability of citizens to determine their leaders through free elections and their rights to free speech, a free press, and other democratic norms. But should economic freedom be considered along with political freedom? A number of organizations have made this argument.

An example is the 2018 Human Freedom Index put out by three libertarian organizations, the US-based Cato Institute, the Canadian Fraser Institute, and the Liberales Institut at the Friedrich Naumann Foundation for Freedom, based in Germany. Cato is largely funded and controlled by the Koch brothers. 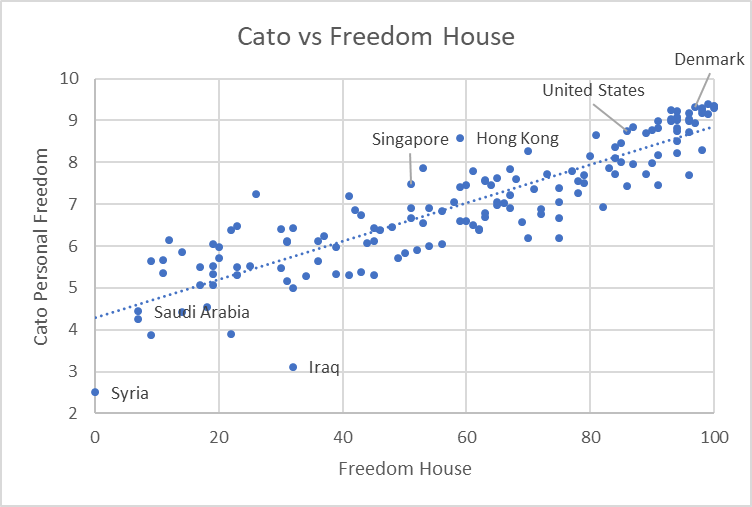 The next shows the nations that both indices rate as most free, congregating in the upper right-hand corner of the graph. It is striking that both indices rate a number of countries as more free than the United States, including Denmark and Sweden that are sometimes accused of being socialist. One might expect that this would discomfort Charles Koch, the Cato’s major funder. 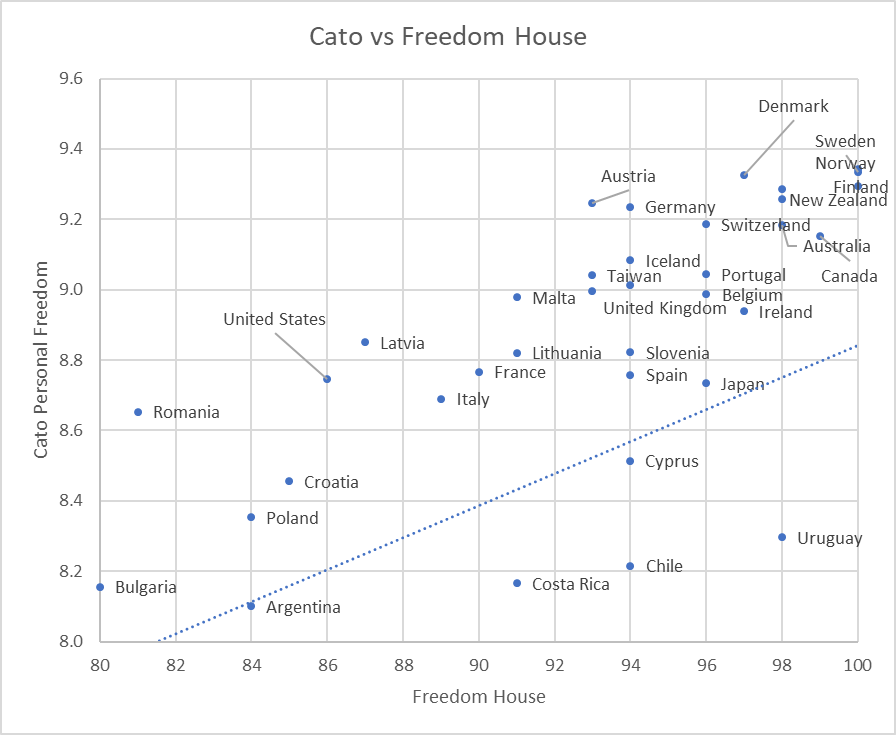 Cato and its partners add an Economic Freedom Index. This index has five elements:

Cato includes the following scatter plot to show that the two indices point in the same direction. As the graph shows, countries that score high on its personal freedom index tend to also score high on its economic index. If one considers only the first four elements in the list above, the correlation is not surprising. All of these depend on the rule of law and a lack of corruption. Getting a high score in personal freedom also depends on the rule of law. 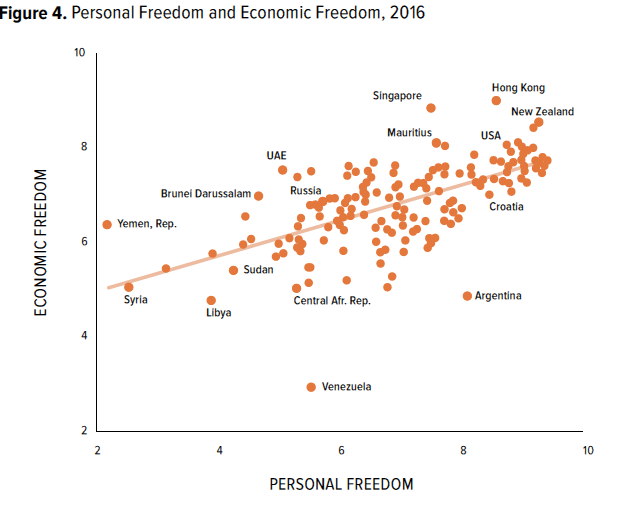 Where Cato goes off the track, however, is with its fifth element, Government Size. Cato calculates this element using three measures of government size and two of the top marginal tax rate. In other words, Cato is saying that a country is freer if its government is small and rich people pay low taxes. At least since Reagan, this theory has become dogma on the right.

But is it true? In the next graph, I redrew Cato’s Figure 4, replacing Economic Freedom with Government Size. Now, instead of a positive correlation with Personal Freedom, there is a small, but statistically significant, negative correlation: countries beneath the dotted line have smaller governments and less personal freedom. 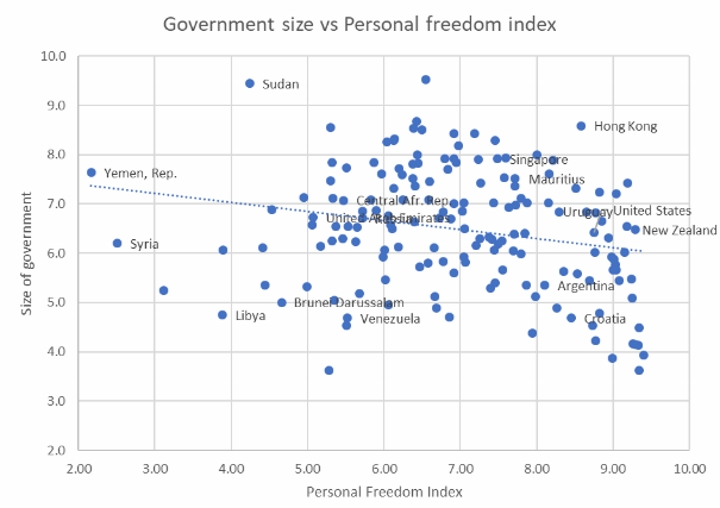 To better understand the relationship—or lack thereof–between freedom and government spending consider the following graph using data from the Heritage Foundation’s Economic Freedom Index. The graph compares two measures: Government Integrity and Government Spending. An initial impression is that the two scores work against each other: that countries with lower government spending have more corruption (they can be found congregated in lower right-hand portion of graph). 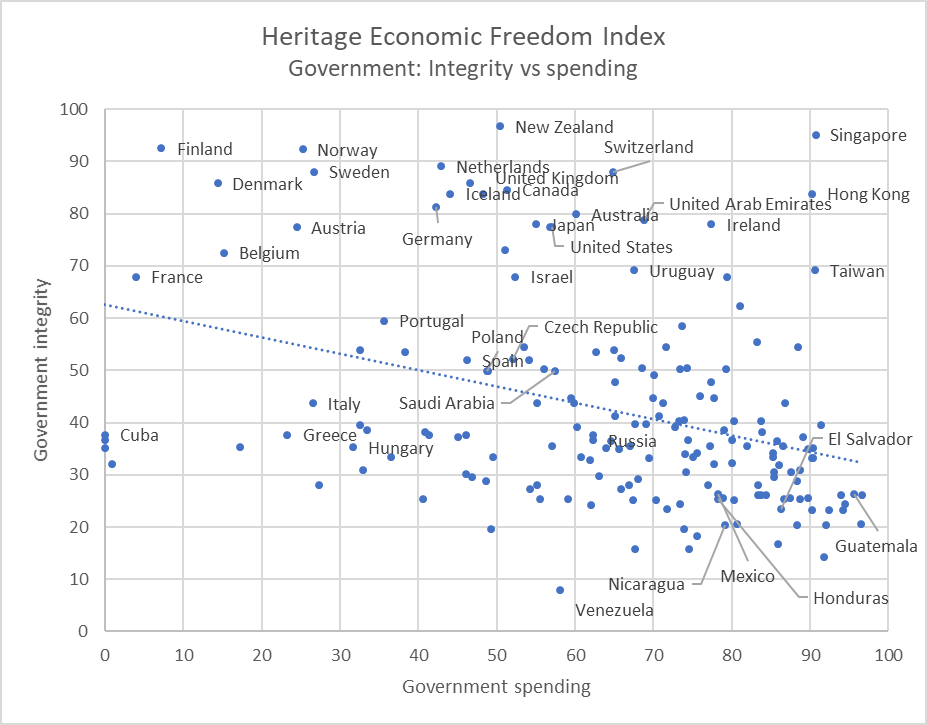 However, the relationship is more complex than at first glance. Consider the high-integrity countries listed the top of the chart, those scoring 70 or above. Among these countries, there is little or no relationship between the percentage of their GDP routed through their government and government integrity. It appears that these countries can be equally successful under a strategy which delivers services through the government, through their private sector, or some combination of each.

Now consider countries in the lower right-hand corner of the chart. Their low government spending levels get a hearty endorsement from Heritage but not their lack of government integrity. Notably these include the countries whose citizens are currently showing up at our southern border. Perhaps authoritarian governments feel little pressure to spend resources on their citizens.

Applying Economic Freedom to the States

Several of the same groups mentioned above have also applied the concept of “economic freedom” to the states. In general, their ratings reflect the same right-wing philosophy, downgrading states for high government spending and high marginal taxes. In addition, states are rated “more free” if they have “right-to-work” legislation, lack a minimum wage law, and low union membership.

Do states rated more economically free have a better economic record? The next graph compares each state’s rating on the Fraser Institute’s economic freedom Index (on the horizontal axis) to that state’s growth in gross domestic product in the 2011-18-time frame (on the vertical axis). A high rating for economic freedom (states toward the right of graph) is no guarantee of outstanding growth (states toward the top). 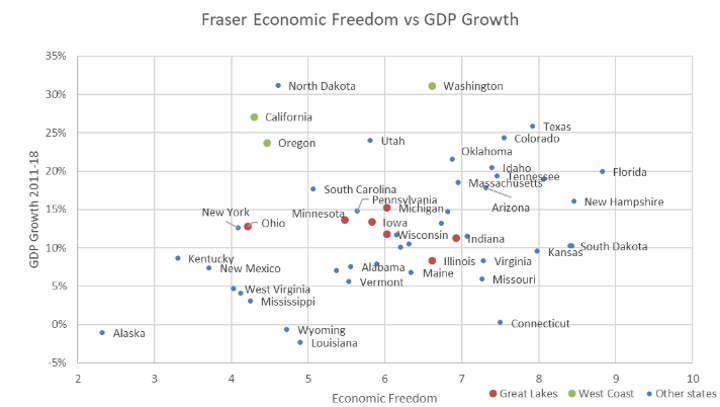 The three West Coast states—California, Oregon, and Washington (shown in green}—enjoyed high growth during this period. Yet two were given anemic economic freedom ratings.

Likewise, Wisconsin, its neighbors, and other Great Lakes states (shown in red) all had very similar growth, despite considerable policy differences. Perhaps geography is destiny.

Cato rates states’ freedom in 11 different dimensions. It applauds Wisconsin’s adoption of right-to-work legislation and places Wisconsin squarely in the middle, at 24th, both overall and economic. Summarizing, it says that “Wisconsin is one of the most improved states since 2010, but a great deal of the credit for that goes to a rise in personal freedom, not just economic freedom.” Other than pointing to the passage of concealed-carry legislation, however, it does not explain why it concludes that personal liberty increased.

The use of “freedom” to describe a set of economic policies has two troubling implications. One is that it is used to sugar coat a set of policies whose result is greater economic inequality in American society.  Who, after all, can be opposed to more “freedom”?

A second is the resulting trivialization of freedom at a time when democratic norms are under attack globally and in United States. If, as suggested by Cato’s report, freedom means being able to carry a concealed gun, buy cheap cigarettes and beer, and to ride without a helmet, how can it be a serious value?