It’s happening world-wide and in the U.S. with Wisconsin helping lead the way.

At least since the Great Recession, freedom and democracy have been on the defensive globally, in the United States, and, alas, in Wisconsin.

The Global Picture from Freedom House

Every year, Freedom House issues a status report on global freedom and democracy titled Freedom in the World. The 2019 report is subtitled Democracy in Retreat. The text begins:

In 2018, Freedom in the World recorded the 13th consecutive year of decline in global freedom. The reversal has spanned a variety of countries in every region, from long-standing democracies like the United States to consolidated authoritarian regimes like China and Russia. The overall losses are still shallow compared with the gains of the late 20th century, but the pattern is consistent and ominous. Democracy is in retreat. 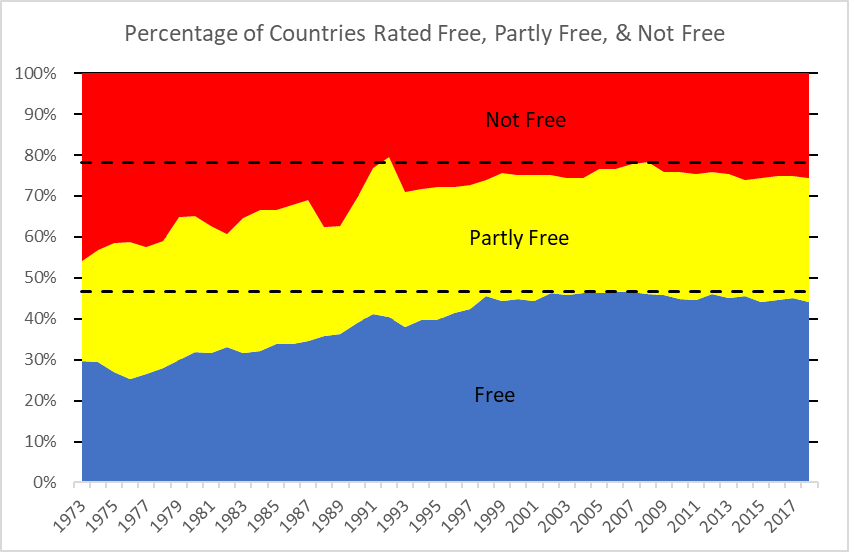 Around 2008 democracy and freedom peaked and then went into a gradual decline. 2008 was the start of the Great Recession, for most countries the sharpest decline since the Great Depression of the 1930’s. Tough times are opportunities for wannabe strong men, who claim that they will restore prosperity if only democratic norms can be ignored, who promise: “I am your voice. I alone can fix it. I will restore law and order.”

The measures used by Freedom House fit into two broad categories, political rights and civil liberties. Each is measured on a 7- point scale, where 1 is most free and 7 is least.

For example, countries with a rating of 1 on political rights enjoy free and fair elections, “candidates who are elected actually rule, political parties are competitive, the opposition plays an important role and enjoys real power, and the interests of minority groups are well represented in politics and government.” A rating of 2 is still consistent with being rated free, but those countries have “slightly weaker political rights … because of such factors as political corruption, limits on the functioning of political parties and opposition groups and flawed electoral processes.”

Despite getting much of its funding from the USAID program, Freedom House expressed concerns about trends in the United States. Last year, “the United States’ political rights rating declined from 1 to 2 due to growing evidence of Russian interference in the 2016 elections, violations of basic ethical standards by the new administration, and a reduction in government transparency.”

On civil liberties, countries with a rating of 1 enjoy a wide range of rights, “including freedoms of expression, assembly, association, education, and religion. They have an established and generally fair legal system that ensures the rule of law (including an independent judiciary), allow free economic activity, and tend to strive for equality of opportunity for everyone, including women and minority groups.”

Overall, the United States’ freedom score placed it in 52nd place out of 212 countries, tying with Croatia.

Other indices tend to tell the same story, that the United States falls behind other advanced countries when it comes to measures of democracy and has suffered an erosion in recent years. Another widely quoted index, one put out by the Economist Intelligence Unit (a unit of the Economist magazine), ranked the US 25th out of 167 countries and recently downgraded its rating from “Full Democracy” to “Flawed Democracy.”

Even the Human Freedom Index, co-sponsored by the Koch-controlled Cato Institute, placed the United States at 17th place, well below such countries as Canada and Denmark and tied with Sweden.

The Relevance to Wisconsin

In recent years, when Wisconsin makes an appearance in Freedom House’s Freedom and the World, it has not been as an exemplar to the world. Instead, it appears offering examples of ways to undermine democracy and freedom.

One issue Freedom House looks for in its country reports is whether there is “a realistic opportunity for the opposition to increase its support or gain power through elections.“ This leads to following discussion:

In an unusual development, outgoing Republican-led legislatures in Michigan and Wisconsin attempted to strip powers from executive offices that had just been captured by Democrats in the midterm elections. The efforts largely failed in Michigan, due in part to vetoes by the outgoing Republican governor, but the relevant measures were adopted in Wisconsin, where Democrats were set to become governor and attorney general. The Republican-controlled legislature in North Carolina had pioneered such moves after a Democrat won the governorship in 2016, leading to court battles that were ongoing in 2018.

While this is its only explicit mention, Wisconsin is implicitly referenced at other points, such as the response to: “Are the electoral laws and framework fair, and are they implemented impartially by the relevant election management bodies?”

In a practice known as gerrymandering, House districts, and those for state legislatures, are often crafted to maximize the advantage of the party in power in a given state. The redistricting system varies by state, but in most cases it is overseen by elected officials, and observers have expressed alarm at the growing strategic and technical sophistication of partisan efforts to capture state legislatures, control redistricting processes, and apply the latest data analysis to redraw maps.

Or here, when addressing another attack on democracy, deliberately making it hard for members of some groups to vote:

Some have also enacted laws requiring voters to present specific forms of identification that may be cumbersome or costly to obtain—a provision that disproportionately affects minorities, elderly people, and those with disabilities.

It is often claimed that the United States is (in words that John Adams included in the Massachusetts constitution) a nation “of laws, not of men.” Yet almost every nation, including the least free, have laws. Unless Adams’ words are meaningless, the statement must require more than that a nation has laws. It means that the laws are written and applied fairly. It cannot mean that defeated governors sign legislation to tie the hands of their successor, or that districts are deliberately designed to make one party’s path to control more difficult than another.

Those who support those anti-democratic measures cannot claim that they support democracy, freedom, liberty or the rule of law.