Philomusica Does Unique Work by Haydn

His Seven Last Words of Christ is still the most performed musical setting of this text.

Haydn’s composition offers both a musical experience and a meditative one. A composite of statements from four Gospels, the words are attributed to Christ as he was dying on the cross. The Seven Last Words have become an important part of Catholic, Anglican, Lutheran and other liturgies. The challenge musically has been to embody scenes of deep and contrasting emotion: from anger – “My God, my God, why hast thou forsaken me?”; to suffering – “I thirst”; to hope – “Today you will be with me in Paradise”; to death – “Into your hands, Father, I commit my spirit.”

Haydn wrote the work in 1787 as a commission by a Spanish church in Cádiz, Spain. The Good Friday service at Oratorio de la Santa Cueva had developed a tradition of readings based upon the seven words performed in nearly total darkness, while hooded celebrants marched into an underground chapel. You may view this dramatic ceremony, with Haydn’s orchestral setting as recreated by Le Concert des Nations online. 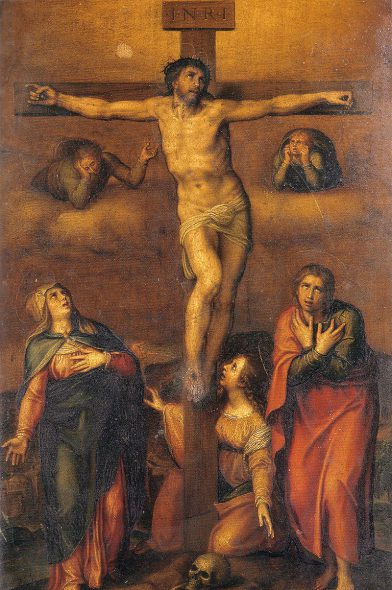 Michelangelo – Crucifixion for Vittoria Colonna (1540). Image is in the Public Domain.

More than 25 composers have set the words to music, but Haydn’s early version has remained the most often performed. Where others have created considerable drama in these scenes, Haydn was able to express the range of emotions without jolting the listener or overwhelming the meditation. Throughout the scenes, Haydn takes advantage of the impact of tonal colors upon the listener. For example, the section “Today you will be with me in Paradise”, opens in C-minor but transitions to a bright C major when reflecting upon the promise of Paradise. All 24 key selections in Western classical music are used by Haydn, the first composition to attempt this.

The changes can be subtle. In the “I thirst” section, music paints the scene. Mandl notes how “the drops, sweat, thirst and the sharp jabs and stabs of the vinegar” that Christ drinks to counter his thirst are evoked. In the scene where Christ dies, all the instruments are muted. “You find out immediately that something special is about to happen,” Mandl observes.

Shortly after the commission for small orchestra. Haydn created a version for string quartet. Later he wrote an oratorio with a choral treatment of the words. The quartet ‘sings’ the phrases in cavatina fashion. The phrases are written on the quartet score to link the words to the notes introducing each section. Mandl explains that “we use the bow to make it sound as though we are speaking.”

Underlying the entire work is a rhythmic layer Haydn maintains. That pulse signals the hallowed character of the work and occurs most clearly when Christ is speaking. As he dies, the ‘halo’ effect goes away.

Haydn’s work is divided into nine sonatas; the seven ‘words’ bracketed by an opening section and a dramatic close. In this presentation, the seven sections introducing the ‘words’ will be prefaced by a brief reading by Wisconsin Lutheran College campus pastor, Rev Wayne Shevey, using biblical text identified by Haydn himself.

The last section breaks from the atmosphere of the rest. Critic Eugene Drucker observes: “The separation of the human and divine has come at a tremendous cost, which we are made to feel throughout the entire work. The sense of upheaval is given its most palpable expression in the Earthquake movement, whose jagged unisons, cross-rhythms, and obsessively repeated material create the impression that the natural world is reeling, pulling apart under the weight of humanity’s sin and loss.”

The Philomusica began 11 years ago as friends who wished to study the quartet repertory together. Their scholarship emerges in the performances, as each concert testifies to their efforts to match the style and purpose of a composition. The Philomusica brings its commitment to interpretation to present a work that requires a sensitive performance. Mandl concludes: “This is a work that is very humble. It is humbling to the performer – less a virtuoso work than a reverent one. The music is first. We have all been influenced by the paintings and visions inspired by the crucifixion. Forget the imagery of the great paintings and imagine what has been transmitted just by the words and the imagery Haydn is trying to convey in the music.”

A quartet performance can be previewed online. To understand how different composers have approached this challenge, check out this lovely choral treatment by César Franck, this powerful organ version by Charles Tournemiere or this contemporary version by James MacMillan for chorus and orchestra.

Philomusica will hold their concert Monday, April 8th at 7:30 p.m. at Wisconsin Lutheran College, Center for Arts and Performance, Schwan Concert Hall located at 8815 W. Wisconsin Ave. Free parking is available in a parking garage to the east of the hall. Tickets can be purchased for $25 online or by calling the box office at 414-443-8802.

Now in residence at Wisconsin Lutheran College, the Philomusica Quartet returns on May 20th to the Wisconsin Conservatory of Music, its former home. It will perform works by Erwin Schulhoff, Antonin Dvorak and Alexander Borodin.

By the way, the Plymouth Chorale will perform Haydn’s Oratorio version of Seven Last Words on Saturday afternoon, April 27 and Sunday evening, April 28.