By Wisconsin Democracy Campaign - Jan 25th, 2019 01:16 pm
Get a daily rundown of the top stories on Urban Milwaukee

Spending by the candidates and outside electioneering groups who smeared them in the 2018 governor’s race set a record of more than $93 million, a Wisconsin Democracy Campaign analysis shows.

Republican candidates and the special interest groups that supported them spent an estimated $57.7 million, which was about 63 percent higher than the more than $35.3 million spent by Democratic candidates and groups. Minor party candidates spent about $32,550.

All told, nearly $58 million or 62 percent of the $93 million spent on the governor’s race supported the Walker-Kleefisch ticket. 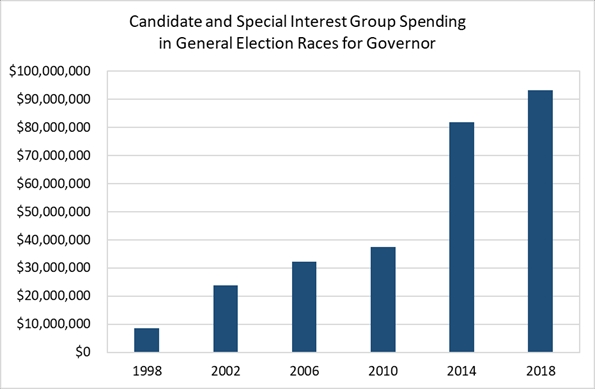 Five groups spent more than $1 million in the governor’s race. Those groups were:

Republican Governors Association (RGA), more than $11.1 million. The RGA, also based in Washington, D.C., used two entities, Right Direction Wisconsin PAC and ACC Wisconsin PAC to sponsor numerous television ads from September until Election Day that attacked Evers, who was the state school superintendent, for failing to discipline teachers for misconduct, and on tax and spending issues;

Greater Wisconsin Committee, about $1.5 million. This Democratic group, which is backed by union and rich ideological contributors, used its corporation and a 527group to sponsor at least two television ads that attacked Walker for his frequent plane trips to events around the state and accused the former governor of cutting taxes to benefit wealthy campaign donors;

The Democracy Campaign calculated the cost of the governor’s race using state campaign finance reports filed by the candidates and some electioneering groups; fundraising and spending reports filed with the U.S. Internal Revenue Service; and television ad buys made by outside groups that did not have to disclose their spending.

For more details about the spending and electioneering activities of all the electioneering groups, go to the Democracy Campaign’s “Hijacking Campaign 2018” feature.

Spending by Outside Groups in the 2018 Governor’s Race