Federal program could help development in challenged areas of Milwaukee and state. 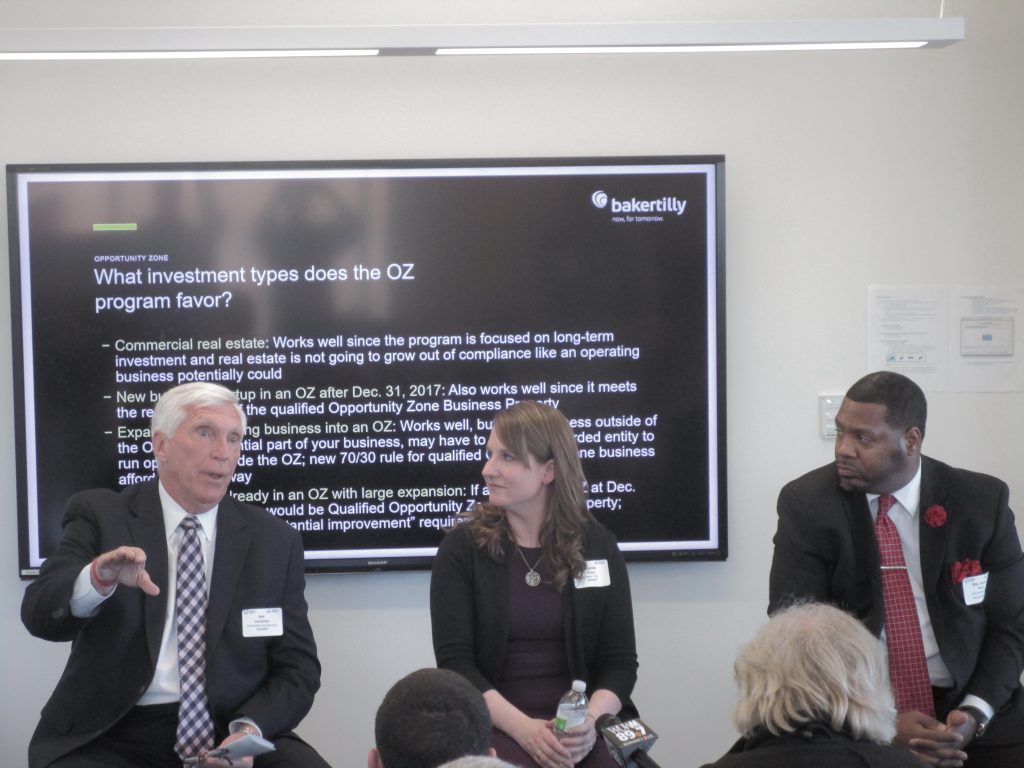 A year-old federal program could bring a range of new development to areas of Milwaukee in dire need of it in the years ahead.

But experts at a recent panel intermingled that sense of optimism with caution.

The program, part of the Tax Cuts and Jobs Act that President Donald Trump passed into law Dec. 22, 2017, has been touted as a mechanism for bringing private economic development into economically challenged communities.

Former Gov. Scott Walker, while still in office, carved out opportunity zones in communities throughout Wisconsin, pairing the designated areas against federal guidelines. The areas pinpointed will provide tax incentives for prospective developers.

Wisconsin has 120 census tracts in disparate corners of the state with the opportunity zone status. Milwaukee itself has 36 of these carve-outs. Many of the areas have been deemed blighted.

Opportunity zones, and their potential impact, were in the news throughout 2018. But Tom Still, president of the Wisconsin Technology Council, said he believes the program is still not widely known — or, if it is, is met with confusion.

“It’s one of those things people seem to know a little about, but not a lot,” Still said at Thursday’s event, held at UW-Milwaukee’s Innovation Accelerator in Wauwatosa.

State Rep. Jason Fields (D-Milwaukee), said he views the prospect of opportunity zones with cautious optimism. Fields was one of three panelists weighing in on the impact of the federal program at Thursday’s event.

“It’s exciting. This is an opportunity to get investors into an urban community and build it up,” Fields said. “From that point, it’s great.”

But Fields, who also serves as managing director of venture capital firm Dark Knight Ventures, said he hoped any developer laying stakes within one of Milwaukee’s opportunity zones would do so to fortify the immediate community and not be solely lured by a tax write-off.

“While (opportunity zones) are great, there are some concerns,” Fields said. “There’s some open discussion, I think, that is still needed so it’s being used in the right way.”

The Tech Council brought in other experts with varied perspectives on opportunity zones at Thursday’s talk.

Jon Lancaster, managing director of Lancaster Investments, said his firm has been digging into the possibility of developing in some opportunity-zoned areas.

While the carved out areas commonly are associated with commercial development, Lancaster said a range of other uses — including residential and other seemingly unorthodox uses — also can be added into the mix of possibilities.

“The basis of retail is changing,” Lancaster said of this outside-the-box thinking. “It certainly makes sense from a residential perspective.”

But Lancaster said he also sees opportunities for other developments in the opportunity-zoned areas, including business incubators for entrepreneurs and spaces for pop-up retail businesses.

Brenda Graat, senior manager at accounting and advisory firm Baker Tilly, said 8,700 opportunity zones have been created across the U.S. For developers looking at long-term investment, Graat, from her perspective, said the federal program could be viable.

“But an investor has to recognize a capital gain,” Graat said, noting that the incentives begin to kick in at the 10-year mark.

Baker Tilly has created an interactive mapping tool, identifying where each of the 120 opportunity zones are located across the state.