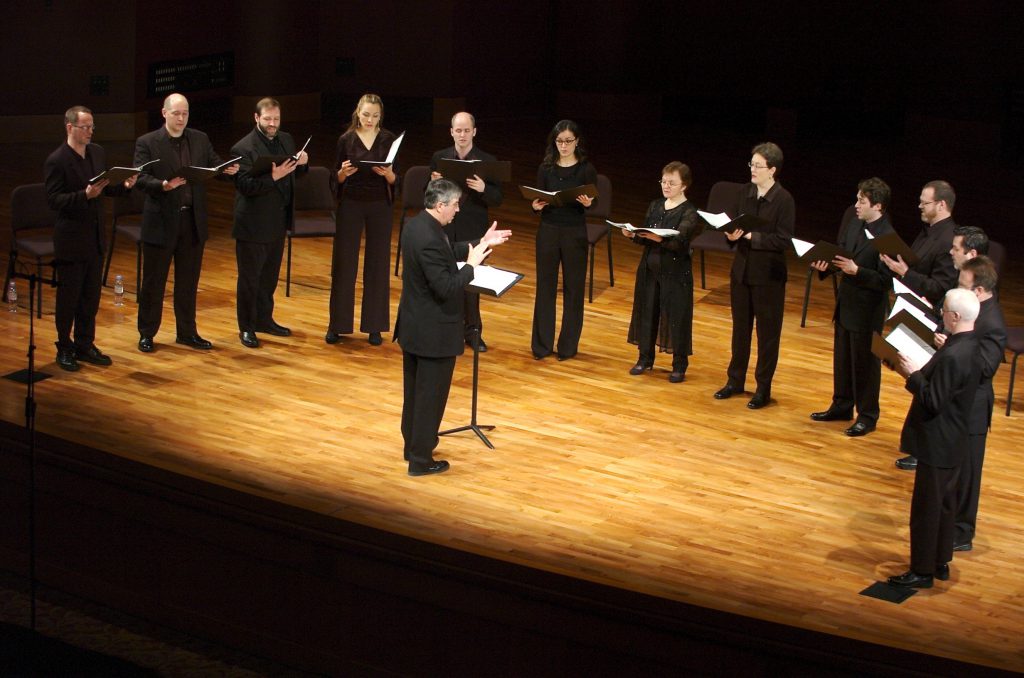 This weekend, Early Music Now offers a Christmas-themed concert on both Saturday and Sunday. The concert, entitled “Creator of the Stars: Christmas Music From the Old World,” features Pomerium, a fifteen-voice, a cappella choral group from New York City. This program presents a selection of Gregorian chant and monophonic devotional songs for the Christmas season alongside polyphonic works by Renaissance masters Josquin des Prez, Giovanni Palestrina and William Byrd.

The concert surveys a range of music of the 13th to 16th centuries, often introducing a Medieval period chant along with a Renaissance work inspired by that chant.

The chants, although using a simpler monophonic structure, are beautiful in their own right. Renaissance composers created polyphonic works that create their own spells.

A conversation with Alexander Blachly, Director of Pomerium, informs this summary of the program.

Early Renaissance composers such as Guillaume Du Fay embellished the chants as though they were songs, accompanied with rather simple harmonies.

Further development became more complicated and very subtle. The changes occurred within church music and in the motets of secular music as well. Personal styles of composers became more distinct.

Palestrina wrote smooth, transcendent music. Theatrically-minded Orlande de Lassus brought drama to his compositions. His lively music turned on a dime, responding to the words very dramatically. His work, “Descendit sicut pluvial,” draws upon a Psalm predicting the nativity. The colorful images are reflected in the music.

English composer William Byrd devoted his time to writing deeply meditative devotions for the Catholic church at a time when Protestant England persecuted Catholics. But, Blachly points out, Byrd was such a great composer that his work was appreciated and protected by Queen Elizabeth the First.

“For the modern listener, perhaps the most striking aspect of the Renaissance elaborations is their supple and, as it were, ‘three-dimensional’ character,” Blachly says. “In this respect, they mirror exactly the progression in Renaissance painting, as it moved from more stylized two-dimensional figures to full-blooded representations who look capable of stepping out of their frames into our own space.”

There is nothing simple about performing polyphonic music. Whether for four voices or seven, the balanced voices need to appreciate when a line is to be expressed or left to support the others. One piece to be performed, by Cipriano De Rore, includes a three-voice canon, each in a different key, with two voices above and two below. The harmonies change in surprising ways with sharps and flats at various points in the texture. You don’t hear the canon, but a sparkly kaleidoscope of harmonies.

Years ago, Blachly reflected, voices were trained to sing opera — not an appropriate style for the nuances of a polyphonic a Capella choir. Now groups such as Pomerium have mastered the skills achieved by those who worked full time in the cathedrals of the 15th and 16th century.

The magic begins with the first notes of the concert, Du Fay’s “Alma redemptoris mater” (Nurturing mother of the Redeemer ). When we hear “Preter rerum seriem’ (Beyond the natural order of things) by des Prez, we can appreciate the challenge to write music itself beyond the natural order. This music celebrates the Christmas by honoring the miracles of the season. You can preview the music with selections on YouTube from their album “Old World Christmas.”

It’s worth attending if you only want to break away from a hectic week and hear meditative music done by masters. Or take the time to listen to the complex turns many of these works take and to appreciate the variety of composition in the Renaissance era.

Pomerium will perform at 5:00 p.m. Saturday, December 8 and 3:00 p.m. on Sunday, December 9 at Saint Joseph Chapel at 1501 S. Layton Blvd. A pre-talk is scheduled to begin one hour before each performance. Parking is available in the lot behind the building, accessed at 29th and Orchard, and on the street. The #27, #56, and Purple bus lines also serve this venue.

The full program listing may be found online.

The Early Music Now series continues next month with a creative and energetic English ensemble, Red Priest. They will perform a program entitled “The Baroque Bohemians: Gypsy Fever From Campfire to Court” at 5:00 p.m. on January 26 at St Paul’s Episcopal Church.