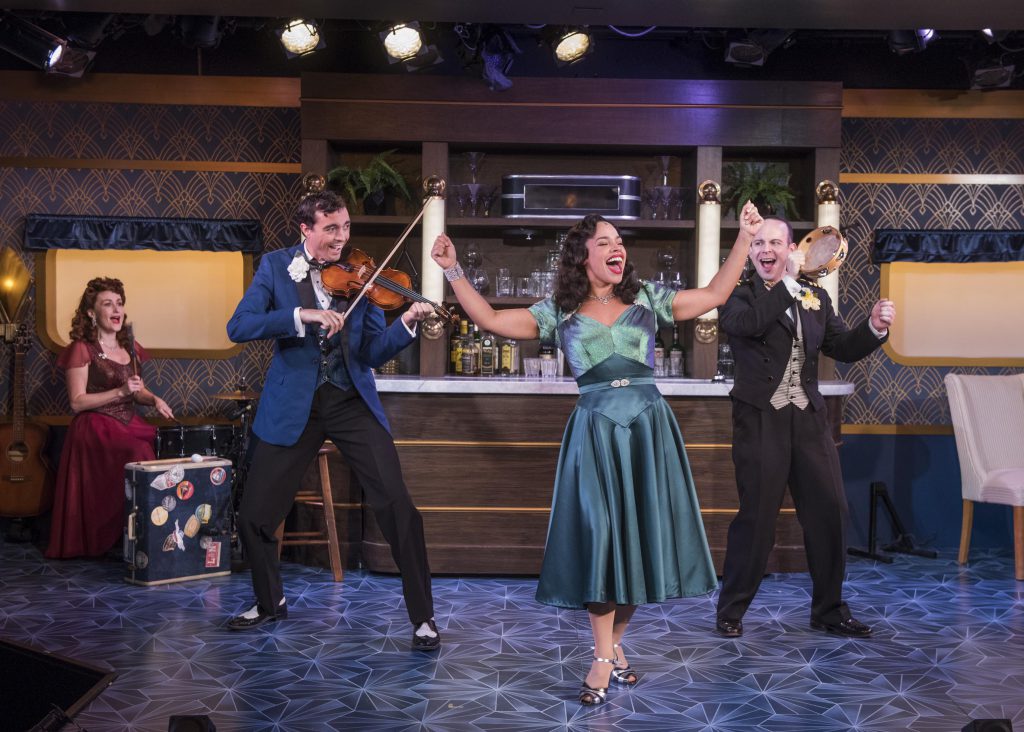 The All Night Strut! – the holiday offering of the Milwaukee Rep at its Stackner Cabaret through January 13 — is a new fashioned old-fashioned musical revue.

With modern delivery plus sophisticated technical connections from costumes to stage cubbyholes, it wallows in reviving the lyrics and stories of the 1930s and 1940s Big Band era, casually connected by the merest story thread that we are riding the club car of a 1940s passenger train. Having performer Jonathan Spivey try to rev up the crowd as a Phil Silvers– style conductor emphasizes the contrivance.

Strangely, one “Strut” show stopper, “Operator, Get Me Jesus on the Line,” is from decades later, but I didn’t mind a heady reminder of how gospel and soul call-and-response rhythms were built upon many concoctions from Duke Ellington, Cab Calloway, Glenn Miller, Benny Goodman and more.

What sets the revue above what you can create in your home parlor – or what even Hollywood tried to pretend home-grown instrumentalists could create in parlors like the one in Meet Me in St. Louis and other sentimental journeys — are the vocal and other ingratiating skills of the five performers trading instruments, props and harmonies with remarkable speed and accuracy.

It’s sometimes too showy a “look at me, ma” set of skills demonstrating their ability to trade licks on a variety of instruments while singing in perfect barbershop. The fact that they can do it and we can’t keeps the patrons engaged. In the second act, there is a physical turnaround of the stage piano (keys to the front) with performers taking turns playing “Eight to the Bar” to convince doubters that the ensemble really is playing all those instruments (with occasionally some augmentations).

The showy “look ma” side kept popping up and, frankly, interfered with the natural appeal of the performers. The moments when the cast hits poses of accomplishment — rather than the better moments when they wrap inside lyrics and mood – do hurt a bit. Fans of these eras of music will appreciate when they give full weight to words and musical tales, but might wish they had given more time to the true chords of nostalgia. A World War II medley shouldn’t need to force the emotional patriotism the words make clear.

The revue lives in a strange zone where it is both affection and parody of more than two dozen show stoppers we probably should have stopped to listen to more often. It tries to make up for the lack of actual big bands and comes close at times. This “Chattanooga Choo-Choo” is foot stopping but may not make you forget Tex Beneke and the Modernaires as key talent for the Glenn Miller Band. Nor will the over-choreographed “Java Jive” make you forget the Ink Spots, though the interlays are familiar.

Nor can cast-member Kelley Faulkner make you forget Dinah Shore’s “I’ll Be Seeing You.” But it is a nice moment for Faulkner that underscores how her genuine talent as a belting cabaret singer is fully on display inside the carefully choreographed teamwork. She doesn’t need the extra push she gives the stage presence.

But everybody gets moments to musically sparkle. Nygel D. Robinson’s comes early in “Brother Can You Spare a Dime.” Brian Russell Carey, loosely recalling the Johnnie Ray school of high tenoring, nails on his own “A Nightingale Sang in Berkeley Square.” Spivey is ever-present, serving as emcee, comic relief, belting high baritone and instrumentalist virtuoso. It’s a mixture of spot-on musicality and overly cute asides.

Katherine Thomas is allowed to unleash a powerful lower register in “Operator” to go with the higher soprano efforts required by the smoother harmonics elsewhere. The lower voice is the most impressive, going with a natural performance appeal.

Nor should the show’s conceptualizer Fran Charnas and director JC Clementz be overlooked in how nimbly they made the ensemble catch cues, props and instrumental exchanges. Without the creative staff, the show would have seemed too long and some of the more obvious razzamatazz could have been wearying. The music itself and the harmonic talents kept us choo-chooing along. How could we not, given “A Fine Romance,” “As Time Goes By,” “Tuxedo Junction” and other great songs.

Sampling the Stackner’s dinner menu before the show was a pleasant experience, from salad to dessert. It easily beats most dinner theaters I’ve experienced in caliber of food and service.

The All Night Strut! Gallery 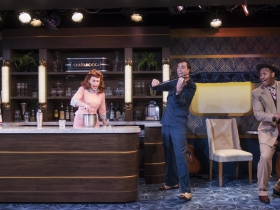 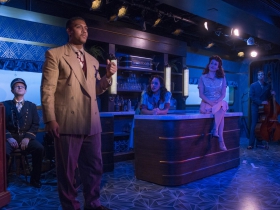 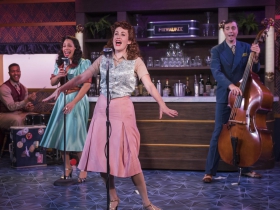 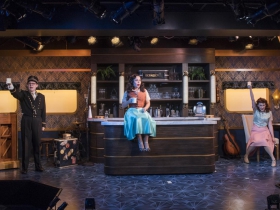 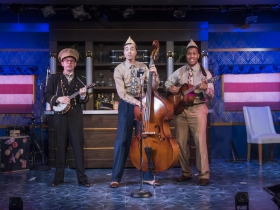 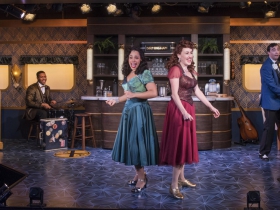