House of Peace Mural Gets Restored

Artist George Gist, who’s created 300 murals, came back here to restore this one, created 25 years ago.

By Sarah Lipo, Milwaukee Neighborhood News Service - Nov 5th, 2018 10:08 am
Get a daily rundown of the top stories on Urban Milwaukee 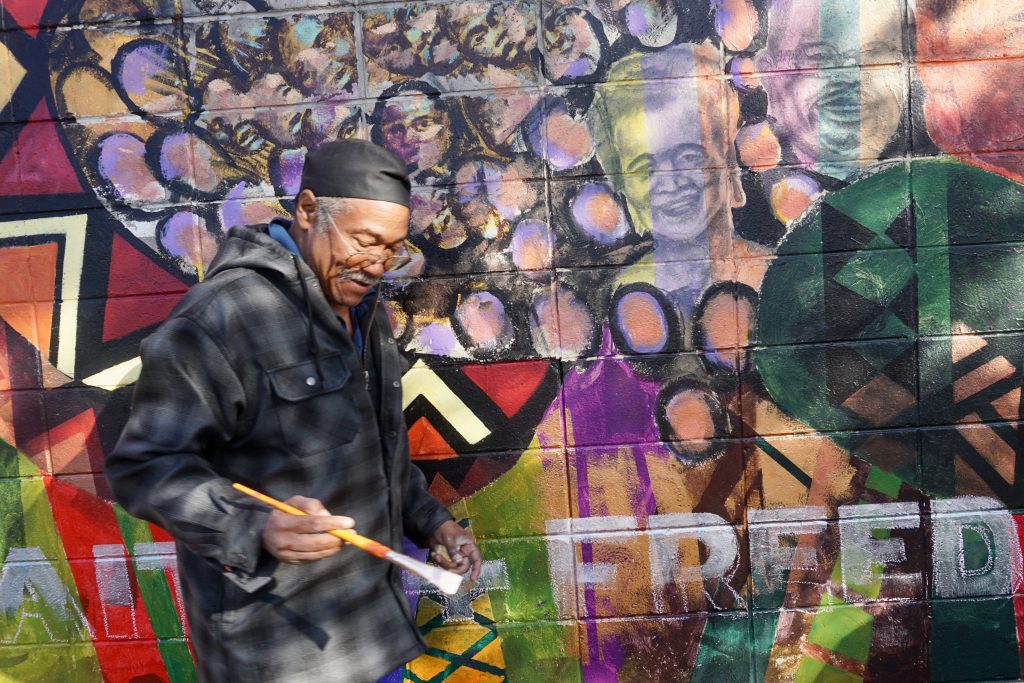 Gist paints in the words Faith + Freedom = Future at the bottom of the mural in white paint. Photo by Sarah Lipo/NNS.

George Gist sits in a metal chair, leaning over his art as he paints in the letters of Faith + Freedom = Future at the bottom of a colorful mural being refurbished on the west side of the House of Peace building in the Johnsons Park neighborhood.

The vibrant mural includes small and large figures of important historical individuals including Barack Obama, Nelson Mandela and Dr. Martin Luther King Jr., to name a few. Final touches on the mural were completed on Nov. 1.

Gist, a native of Detroit who now resides in Pittsburgh, said this may be the 300th mural he’s completed, with 20 of those murals in Milwaukee.

After 25 years, the original mural was chipped and faded, an “eyesore of the neighborhood,” according to Brother Rob Roemer, the executive director at the House of Peace, 1702 W. Walnut St.

Brenda Brown, chairperson of the Johnsons Park Neighborhood Association, said the “vibrancy of the other murals in the neighborhoods inspired me to be a part of revitalizing the murals on the perimeter of the House of Peace.”

Three other murals at the House of Peace will also be refurbished. The two larger murals on the front corner of the building were created by Brad Bernard, a mentee of Gist’s who now teaches at Milwaukee Institute of Art & Design, and Brad Pruitt. The two corner murals were completed under the name Collaborative Effect, a group of artists funded by Gist in 1994.

“When Mr. Gist relocated to Pittsburgh in 1995, I and fellow Collaborative Effect artist Brad Pruitt continued the artist group and submitted the mural proposal under the group name to the House of Peace in an effort to continue George’s vision,” Bernard said. 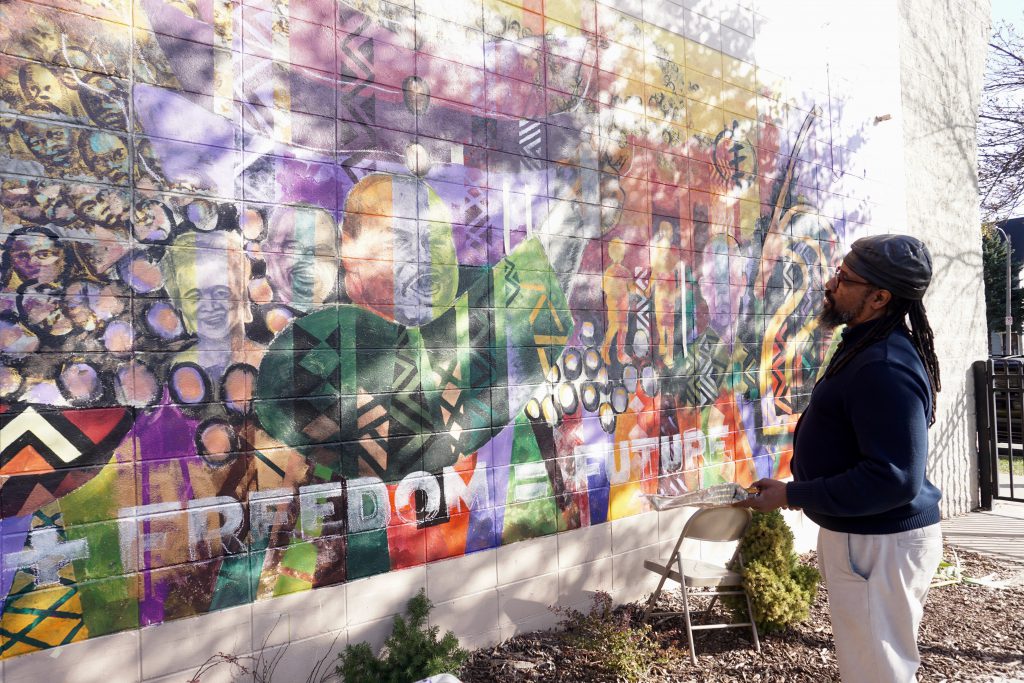 Sheriff Richard Artisan, U.S. Gwen Moore, the Rev. Booker Ashe and founder of Carter Child Development Lorraine Carter are some of the individuals depicted on the two corner murals. “The individuals depicted were selected by Brad Pruitt and me and served as examples of those we felt had committed their life work to the cause of public service or community activism,” Bernard said.

The smaller panel on the 17th side of the street was created by Gist.

“What I executed on the murals on the front of the building was a culmination of what I had learned from George,” Bernard said.

Bernard is also helping Gist repair the mural on the west side of the House of Peace. “As fate would have it, this was the first time George and I would have collaborated on a mural piece together in the 25 years of knowing each other,” Bernard said.

Work on the three remaining murals at the House of Peace is tentatively scheduled for spring 2019, said Kerry Wiedemann, a JPNA board member. An estimated $20,000 is needed to fix those murals.

This year also marks the 50th anniversary of the House of Peace. Bernard said this benchmark was a great opportunity to fix the murals. “That became the fuel behind the fire,” he said, adding, “I think it’s been well received by the community because of the visibility from the street.”

Roemer said the House of Peace originally was intended as a place for individuals to form community with others. Today, it also provides food and clothing. The clothing is distributed free, and the emergency food pantry and Holiday Food Boxes serve many individuals and families in the area, according to its website.

House of Peace leaders have wanted to refurbish the murals for years, according to Roemer. “It’s a real blessing that the JPNA stepped up and did this for us,” he said.

Gist said he repainted some of the faces on the mural, but also added new individuals, including Obama. He said he included individuals who “bend over backwards to keep us happy, keep us safe, keep us eating well and have spiritual values.”

Wiedemann helped contact Gist and Bernard to work on the mural. “I think it’s great for the kids in the neighborhood to see this,” she said. “I think it’s a great inspiration.”

Brown said JPNA received a $4,000 grant from the Neighborhood Improvement Development Corporation for the mural Gist is currently working on. NIDC works with agencies, developers, local foundations and residents to improve Milwaukee neighborhoods. The grant was matched by Bader Philanthropies, the Brewers Community Foundation and the Milwaukee Rotary Club.

According to Gist, individuals can receive subliminal messages from murals. “Anytime we can understand where we came from, and what it takes to get us through, I believe this is a positive message,” he said.