“Most Important Election Of Our Lifetimes”

By Ximena Conde, Wisconsin Public Radio - Oct 29th, 2018 12:34 pm
Get a daily rundown of the top stories on Urban Milwaukee 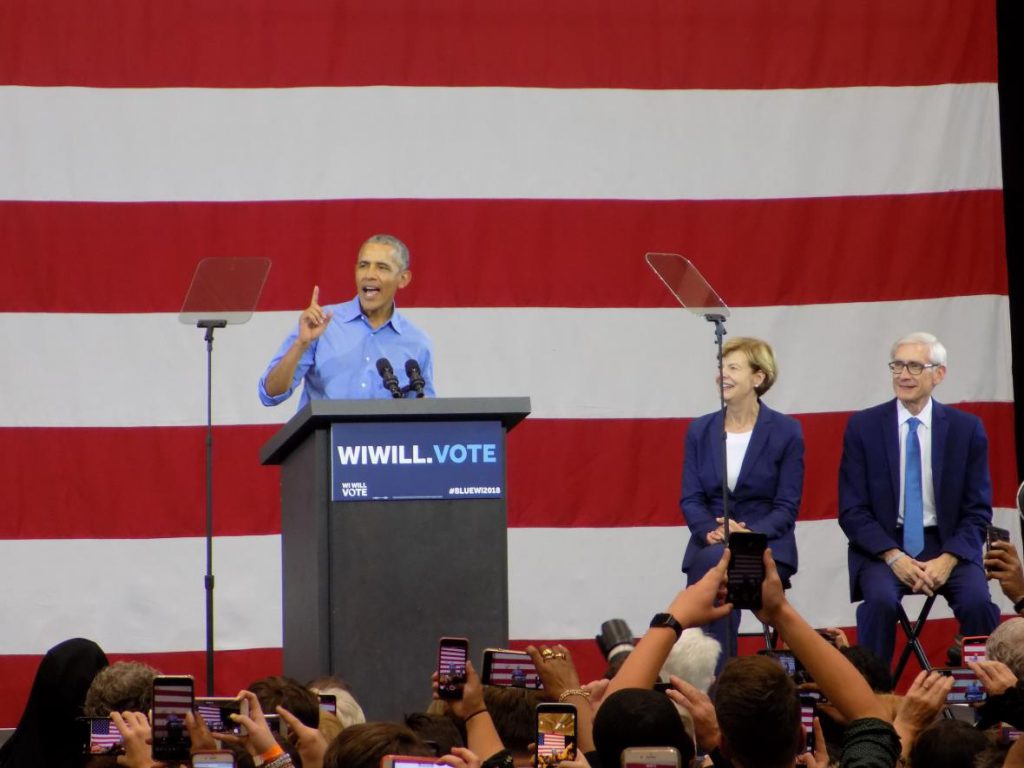 With a few days left until midterm elections, Wisconsin Democrats are hoping former President Barack Obama‘s visit to Milwaukee on Friday will give a major boost to voter turnout.

Obama came to Wisconsin to stump for the Democratic ticket and headlined a rally at North Division High School. He told the crowd of more than 3,000 people on Friday afternoon that he had many reasons to visit Milwaukee, including its sports teams and brats, but one reason stood above all others:

“I am here for one simple reason: I am here to ask you to vote, to vote in what might be the most important election of our lifetimes,” Obama said to a roaring crowd.

Obama urged people to vote because health care, education funding and legislation in favor of “living wages” are on the line.

U.S. Sen. Tammy Baldwin, gubernatorial hopeful and state schools Superintendent Tony Evers and U.S. Rep. Gwen Moore were among the Democrats in attendance at the event. Throughout the rally officials stressed the importance of Milwaukee residents casting their ballots.

Milwaukee Mayor Tom Barrett kicked off the line of Democratic speakers reminding the crowd that President Donald Trump won Wisconsin in 2016 with 22,000 votes.

The former president gave the crowd a sober assessment of how voting can advance political change, explaining that not everything gets fixed all at once.

“If you vote in this election, it’s not as if suddenly poverty is eliminated or all the jobs (that) left are coming back. Or suddenly, there’s no discrimination, women are always treated with respect. That’s not how politics work,” Obama said.

Still, he stressed that voting would make things better.

“If you vote in this election, Wisconsin, it’ll be a start,” he said. “You’ve got to get started and then just keep on going.”

While frustration for what is happening at some of the highest levels in politics has been a big talking point in the midterm elections, health care coverage has been a central issue in Wisconsin’s statewide races. The state is currently leading a lawsuit to overturn Obama’s signature health care law, the Affordable Care Act, and Baldwin’s GOP opponent, state Sen. Leah Vukmir, has campaigned on being the deciding vote to repeal the ACA.

Baldwin has campaigned on protecting the ACA and the need to create a single-payer health care system.

“Do you trust Scott Walker to protect your health care?” asked Evers before touting plans to make education a priority, fund roads, guard the environment and protect those with pre-existing conditions.

Obama reminded the crowd of the number of Wisconsinites who gained health insurance through his signature legislation.

“Democrats made that happen,” he said. “Not a single Republican, not one joined us. Not one.”

Obama then reminded the crowd of Republican efforts to repeal the ACA. 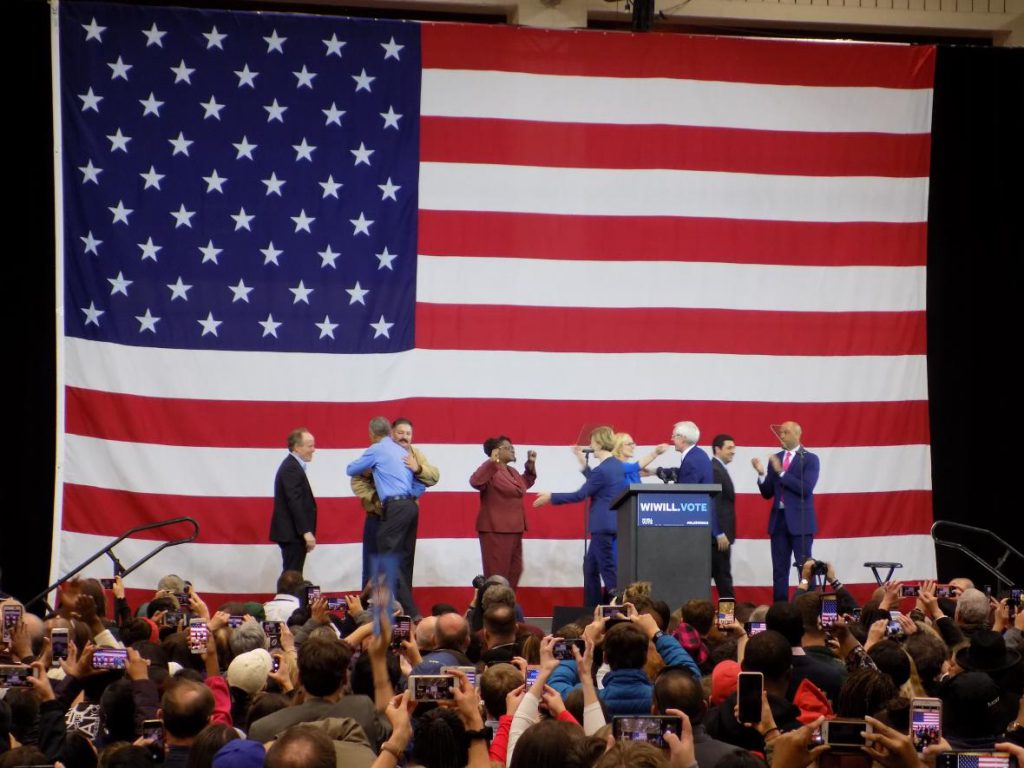 Obama appeared on stage with other Democratic candidates at Milwaukee rally on Friday. Photo by Ximena Conde/WPR.

“They have been obsessed with trying to undermine, sabotage, repeal that law that makes sure you’re not discriminated against because of pre-existing conditions,” he said, telling people that if the GOP keeps control of Congress, they’ll continue those efforts.

The former president was critical of the current political tone and he slammed Wisconsin Republicans for their efforts to repeal the ACA while promising to protect pre-existing conditions.

“And the very people who said it would pay for itself and are now seeing the impact of the deficits it’s caused, what are they talking about doing?” asked Baldwin. “Not paring it back but going after Social Security and Medicare — earned benefits, earned benefits.”

Rally Held In Area Which Saw Declines In Voter Turnout

Holding the event at North Division High School, which is located in the city’s 53206 zip code, had a special purpose. This portion of the city is predominantly black and many voting wards in this zip code saw double-digit dips in registered voter turnout between the 2012 and 2016 election, according to city election data.

Mandela Barnes, Democratic candidate for lieutenant governor, stressed the importance to win back voters who came out for Obama in 2008 and 2012 but stayed home in 2016.

Barnes said voters are frustrated with what’s happening in the White House, Congress and the U.S. Supreme Court.

“We need to vote like we’re frustrated,” Barnes said, encouraging the crowd to vote for Democrats up and down the ticket.

While the drop in African-American voter turnout isn’t exclusive to Milwaukee or Wisconsin, it could be a game changer in a close race for governor.

Midterms don’t draw as many voters to the polls the way presidential elections do, and black voters in the state’s largest city could tip the scales one way or the other if they turn out in lower numbers — even for the already-lower turnouts associated with midterms.

Ahead of the Obama visit, the Republican Party of Wisconsin issued a statement accusing Baldwin of supporting a socialist government takeover of health care.

“Tammy Baldwin is an extreme liberal out to finish the job that Barack Obama started,” said Alec Zimmerman, spokesman for the Republican Party of Wisconsin.

Wisconsin has drawn some political stars this week, including President Donald Trump on Wednesday. Bernie Sanders, Vermont’s U.S. senator and 2016 presidential hopeful, was in Milwaukee on Monday at the University of Wisconsin-Milwaukee encouraging young people to vote.

Still, the visits are ongoing. Next week, former Vice President Joe Biden is slated to visit Madison and Milwaukee.

In Milwaukee, Barack Obama Says This Election ‘Might Be The Most Important Election Of Our Lifetimes’ was originally published by Wisconsin Public Radio.