By Shawn Johnson, Wisconsin Public Radio - Oct 24th, 2018 11:18 am
Get a daily rundown of the top stories on Urban Milwaukee

There’s not much overlap between Republican Gov. Scott Walker and Democratic challenger Tony Evers when it comes to the issue of transportation.

It’s been Evers who’s talking about how bad the roads have gotten in Wisconsin, pinning the blame on Walker.

And it’s been Walker who has been warning that if he loses and Evers wins, the drivers of Wisconsin could get hit with a gas tax hike.

“I can’t remember it being this black and white,” said Todd Berry, a longtime budget analyst who ran the Wisconsin Taxpayers Alliance for 25 years.

Neither of Walker’s previous opponents for governor attacked him over the condition of Wisconsin’s roads in the same way Evers has in 2018.

“Scott Walker has drawn a line in the sand around transportation, and as a result, our roads are crumbling,” Evers said at their first debate. “We have people in northern Wisconsin who are scraping the asphalt off the roads, they’re driving on gravel roads.”

Evers has had help from Wisconsin’s Operating Engineers, a road-building union that endorsed Walker in his first run for governor. This year, they’ve endorsed Evers, and they’re backing an ad campaign against Walker that encourages people to send in pictures of damaged roads — the group calls them “Scottholes.”

Evers says “everything is on the table” when it comes to new sources of revenue for roads, from establishing toll roads to increasing the gas tax. He says if he’s elected governor, both parties will work together toward a solution.

“Republicans and Democrats get this idea,” Evers said. “The only person in the way of solving this infrastructure problem in the state of Wisconsin is Gov. Walker.”

And there’s polling to suggest that Evers is in the majority here. The latest Marquette University Law School poll showed 64 percent of Wisconsin residents think their roads are in fair or poor conditions.

But when it comes to what to do about those roads, Marquette pollster Charles Franklin says it’s a different story. He says Marquette has been asking about road conditions and road funding for years.

“And in every one of those cases,” Franklin said. “We find a demand for better highways and at exactly the same time a reluctance to pay for it.”

In the latest Marquette poll, 61 percent of registered voters said it was more important to them to keep gas taxes and vehicle registration fees where they are now instead of increase spending on roads and highways.

These are the voters Walker is going all in for this election.

It’s something that has been a long time in the works for the governor. During the last budget cycle, he sparred with fellow Republicans in the Legislature who wanted to raise taxes or fees to pay for roads.

Walker set the table in September of 2016, when he presented his own Wisconsin Department of Transportation budget. At Walker’s insistence, the budget included no new taxes or fees.

“And if people want to make changes in the budget, they need to be mindful of that,” Walker said at the time. “I will veto any changes made to the budget that add to the overall burden of the taxpayers of the state.”

Walker has come back to this pledge repeatedly over the past couple of years, insisting some kind of transportation tax or fee could theoretically go up if another kind of tax goes down.

But Berry, the longtime budget observer, says Walker had the chance to do that in this last budget when he cut income and sales taxes.

“That would have offset a modest — something like a 5 cent per gallon — gas tax,” Berry said. But Walker passed.

By February of 2017, the governor’s position had evolved. When asked whether there was any scenario where an increase in the gas tax was on the table, Walker said no.

And during the closing weeks of his 2018 campaign for governor, there’s nothing in Walker’s ads to suggest any kind of ambiguity on the issue.

Walker and conservative groups like Americans for Prosperity Wisconsin have relentlessly attacked Evers for being open to increasing the gas tax.

Walker even cut a 15-second ad that plays on video screens at gas pumps.

“Good thing you’re filing up,” Walker tells motorists, “because if Tony Evers wins, he’ll raise the gas tax by as much as a dollar a gallon.”

Asked at their debate what he had to say about the dollar-per-gallon claim, Evers denied it.

“Holy mackerel is what I say,” quipped Evers. “Of course, the people of Wisconsin understand — except for Scott Walker who keeps repeating it — a dollar a gallon is ridiculous. It’s never going to happen.”

But Walker contends that until Evers gives voters a number for how much revenue he wants, they should assume the sky is the limit.

“If you don’t have a plan until after the election, ladies and gentlemen, you need to be ready for a massive gas tax increase,” Walker said.

Whether Walker or Evers is elected governor for the next four years could go a long way toward deciding how Wisconsin’s roads get funded for years to come.

Legislative leaders from both parties have signaled they’re open to some kind of transportation revenue increase. Walker could potentially block them. Alternatively, they could find a willing partner in Evers.

It gives voters a clear choice when it comes to roads and taxes, and which path they choose is a matter of opinion. 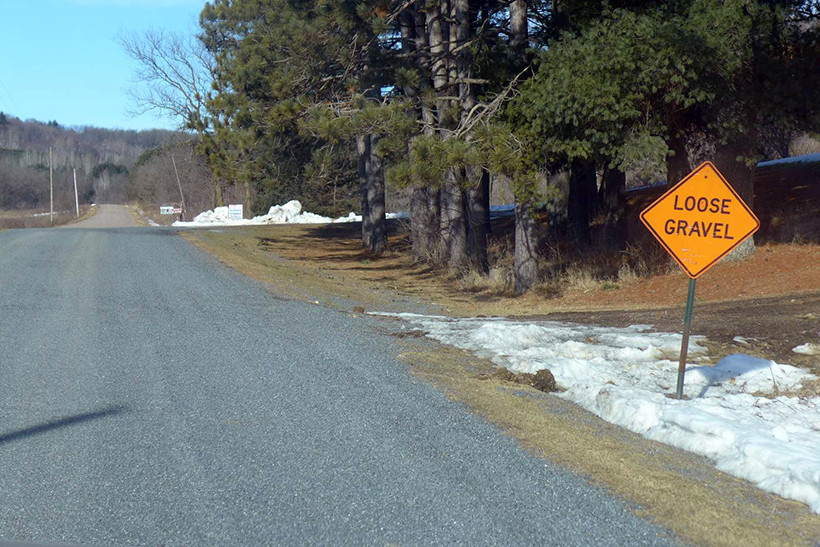 This March 2017 photo shows a sign warning drivers in Northfield, Wis. of loose gravel ahead. The town has turned 12 miles of road from pavement to gravel. Shawn Johnson/WPR.

A 2017 state audit found the percentage of state highways in “fair, poor or worse” condition more than doubled between 2010 and 2015.

And according to the Legislature’s nonpartisan budget office, the state will spend roughly 21 cents of every dollar of transportation revenue paying off old debt. That’s nearly double the amount of debt service the state was paying before Walker took office.