By Allison Dikanovic, Milwaukee Neighborhood News Service - Oct 19th, 2018 11:21 am
Get a daily rundown of the top stories on Urban Milwaukee 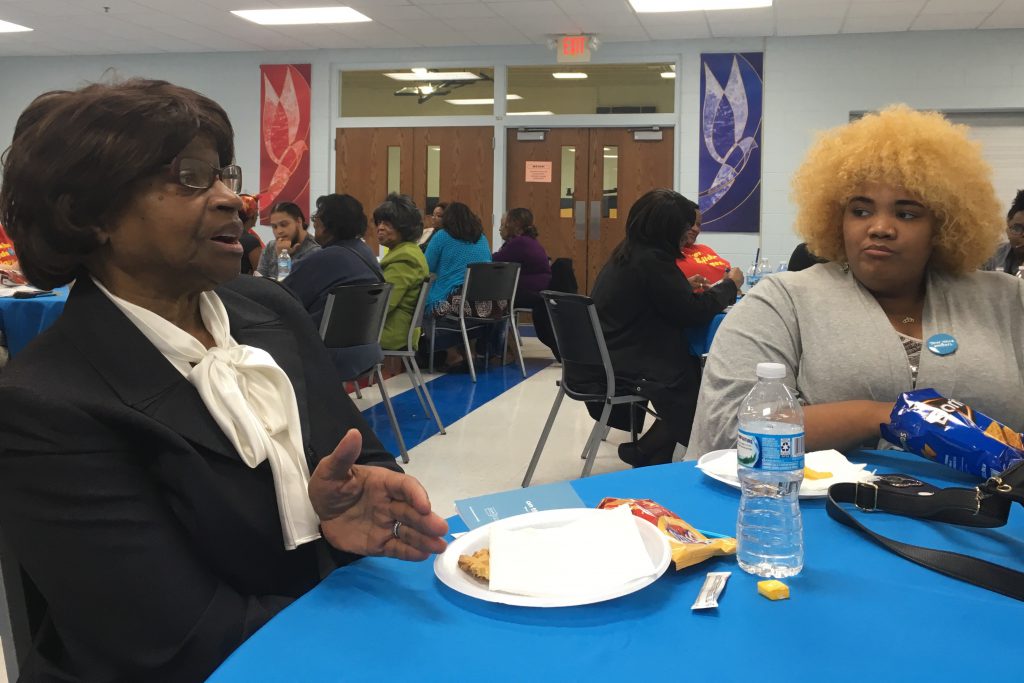 Clara Beamon and Lilo Allen participate in a dinnertime conversation as part of the second On the Table event. Photo by Allison Dikanovic/NNS.

Volunteers donning red t-shirts with yellow letters that spelled out, “Conversation builds bridges” on the front, and “Understanding helps us cross,” on the back set each table with plates, silverware, notebooks and a bowl of Starbursts.

As about 70 participants filed into Early View Academy of Excellence, 7132 Good Hope Road, they were sent to different tables based on their age, ensuring that someone under 20, between 20-30, between 30-50, and above 50 was at each table. A high school student in a hoodie took a seat next to an elderly woman in a black suit. They were asked to select their favorite color Starburst from the bowl, but not to eat it yet. Before breaking bread, the participants would use the square candies to break the ice.

“If you picked yellow, please stand up, introduce yourself to those at your table, and share a way that you choose to spend your time when you’re alone,” requested Katina Fuller-Scott, the organizer of the On the Table event, part of the Greater Milwaukee Foundation’s day of community conversations around the city. An estimated 10,000 people gathered at different tables and events at breakfast, lunch and dinner to talk about a wide array of issues they care about and potential solutions. 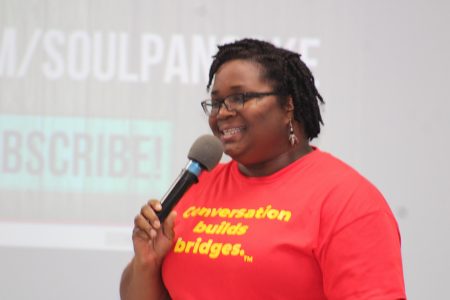 Katina Fuller-Scott organized her own On the Table event after having a powerful experience last year. Photo courtesy of Tiffany Johnson/NNS.

“It’s time to move past the idea of ‘these young people’ and ‘these old people’ and welcome in a space of transformation,” Fuller-Scott said to the group. “We’re here to take the time to get to know each other.” Then, participants who chose pink divulged anecdotes of the most exciting thing they’ve ever done.

Fuller-Scott decided to organize this intergenerational dinner conversation event after attending the first On the Table event at City Hall last year. She loved meeting new people and hearing their perspectives and experiences but felt that two important things were missing: the voices of youth at the table, and conversation about where she lives, in the 9th aldermanic district on the northwest tip of the city.

Fuller-Scott partnered with Mt. Zion Assembly Healing Temple, the church’s youth group, and Go To Your Destiny Community Services, a nonprofit organization, to ensure that participants “from generation Z all the way to the silent generation” would be present.

“We were very intentional about inviting all generations, but then not necessarily focusing on the generations because a lot of time when we do that, there are stereotypes attached to it,” Fuller-Scott said. “So tonight we’re talking about community: how do we build community, how do we value our voices, what is our responsibility in our community, and how does that change based on when we were born and how we were raised?”

Participants brought different experiences and pieces of Milwaukee’s past and present to the table. Charlotte Scott moved from the South Side of Chicago to 38th and Brown when she was a little girl. She said she has witnessed the ways that neighborhood has changed throughout her life. Jesse McSwain graduated from North Division High School in 1970. He said he advocated to make sure that Black History Month was celebrated at the school. Lilo Allen teaches a creative writing curriculum she wrote called “Black Girl Magic” and just opened up her own business on the corner of North and Vel R. Phillips avenues. Tyasia Maldonado is a senior at Early View Academy.

The participants identified groups of people they are a part of that could use more support: youth, women, homeowners, elderly people, people who have experienced domestic violence, entrepreneurs, students and neighbors. Trauma, hurting, healing and a responsibility to each other’s well-being surfaced organically as common themes from table to table.

Those sitting at Deondray Love’s table talked about how many people they know are in pain but don’t have safe, healing spaces to express themselves, including access to mental healthcare or groups of supportive people they can trust. “That’s why what we’re doing right now is so necessary, sitting around a table having a conversation, being here with each other,” he said.

“Generational post-traumatic stress disorder is widespread in a lot of our communities,” said Clara Fleming. “We can place blame everywhere, but as a community, we take the fault for that in how we care for each other.”

Fleming, a table leader, brought three guests of different generations with her to the event. When asked why she felt spaces like these are necessary, she responded, “We’re becoming a community of I and me, not we.”

Participants offered ideas on how they could better care for each other and act more neighborly, building the kinds of communities they’d like to see.

“I want young people to have pride in who they are and to know their value,” said McSwain. “We can’t walk around afraid in our community. We have to positively engage with the young people around us.” McSwain said he does this by respectfully approaching teenagers at places such as McDonald’s, questioning their word choice if he hears them cussing, and striking up a friendly conversation.

“The ability to effectively communicate requires you to understand and believe in what an individual can bring to a conversation,” Scott agreed. “Talk to them, not at them”