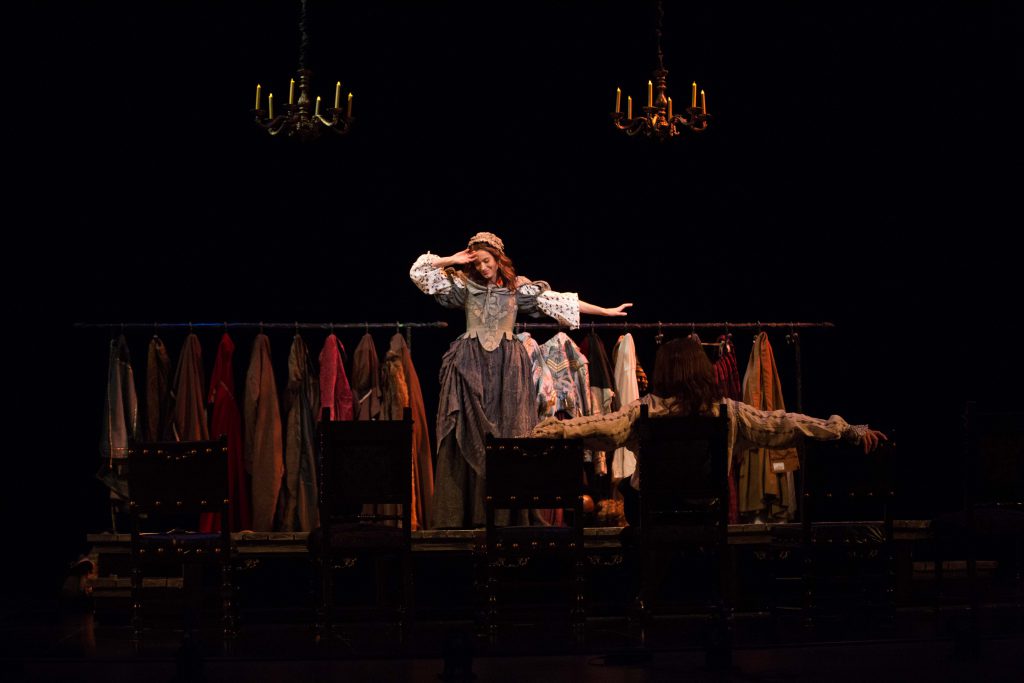 In 17th century England, as the Restoration swept away the Puritan mores that all female theater roles had to be performed by men, the consequences of this new absolutism descended on Edward Kynaston, the stage’s most famous portrayer of classical women. A royal decree from King Charles II ended his livelihood and the celebrity he had enjoyed from men and women alike.

No longer could any stage She be performed by a He, declared the king with his paramour and would-be actress, Nell Gwynn, whispering in his ear, instantly crippling both Kynaston’s psyche and his art.

Fascinating gender questions dominate Carlisle Floyd’s opera about these events, Prince of Players, presented by the Florentine Opera October 12 and 14 at Uihlein Hall. Unhappily, the possibilities missed became more noticeable than any achievement in the elaborate production with sets and costumes imported from the Houston Grand Opera, where the new opera from the 90-year-old American composer was first staged.

The historic situation, previously mined in the film Stage Beauty, offers intrigue into what constitutes a man or woman, what attracts the other, where the meanings of sex and even transgender lie.

Quite a field to explore in Floyd’s music and English-language libretto and quite a challenge particularly for a fine baritone, Keith Phares, who must range from burly voice to delicate hand gestures, from self-mocking falsetto to primal intensity as Kynaston.

Phares seeks to physically and musically suggest the war within Kynaston as his feminine veneer is stripped away by jealous men and real women. The revelations are in costumes and dress plus subtle variations of look and gestures – a style that seems to limit what he can say or show, so his dilemma remains more gripping than the telling.

The music tries slightly dissonant recitative and subtle often interminable interplays among silence, sung dialogue and some deft woodwinds and gentle horns from the Milwaukee Symphony Orchestra under William Boggs. Stage director Michael Gieleta cannot pick up the pace, nor can he find meaning within the pauses. Even his music hall romp and bedroom undressing are brief interludes to pop in earthy behavior rather than genuine connections.

We soon realize that the lengthy set changes are not just to show off the descending chandeliers, racks of costumes and formidable turntable that take us backstage to stage front, all provided by Houston. The time expended matches the stately musical pace that Floyd has imposed.

Certainly his libretto attempts to outline the personal and court intrigues. He has given us Wuthering Heights, Susannah and other memorable operas that the Florentine has committed to recording.

This one lacks the haunting musical patterns and depth in recitative the story seems to cry out for. It finds us constantly asking if the music is adding as much to the discussion as the time it takes to unfold. We are left mulling why Kate Royal’s deft modern singing – and it is deft and supple — doesn’t add sufficient character and emotional insight into the woman who both loves Kynaston and wants to replace him. There is an anchor of a musical idea in the pillow she clutches as she searches for her inner meaning. But the character concepts are dropped to simply move on to the next scene — a traditional opera technique, perhaps, but without a memorable musical motif for the patrons to hang onto.

It is dialogue more than music that reveals baritone Alexander Dobson’s duplicity as the hearty theater manager. The singer must substitute power of delivery for insight.  Similarly, soprano Rena Harms creates an evil coquette air around Nell with too little such music to show it off in.

The entire large cast has mainly recitative moments to pinpoint their characters within a parade of handsome court costumes. The most interesting as well as violent physical encounters are subdued behind held high notes and some artifices of opera behavior that interfere with so internal a story of acceptance and change.

There is a central theme – the death scene of Desdemona in Shakespeare’s Othello — that does enliven the opera’s conclusion as well as point out the limitations of Floyd’s approach. Shakespeare’s words become a vehicle to differentiate the sexes’ view of performing, the man going for the delicacy of feminine gestures, the woman fighting for every breath. It was a nice touch for Floyd to build in acting realism as it began to emerge in this era. But again it is the staging instincts more than the music that capture us. The music insufficiently elevates or punctuates our insights.

Floyd has provided an operatic exercise without proving that an operatic approach is the best way into the heart of Prince of Players.