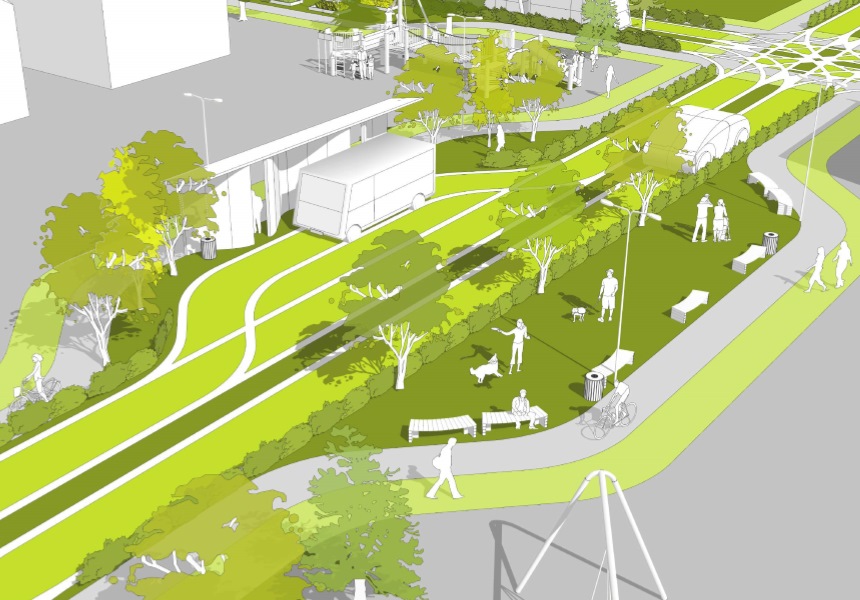 Urban details in satellite images: All over the world cities represent a changing of the natural order in the image of humans. In thier new book City Unseen: New Visions for an Urban Planet, Karen Seto and Meredith Reba look at satellite images from 100 different cities around the world to see thier impacts on the landscape. They use remote sensing to show the health of vegetation and the stark differences between human settlement and unchanged lands. (Karen Seto and Meredith Reba | Next City)

Radical plans to improve road safety: New plans from the City of London in England, colloquially known as “the Square Mile”,  would drastically reduce the danger of vehicles in the core city either by banning them outright on certain streets or lowering speeds to 15 mph. Inside the Square Mile, streets closed to vehicles will be pedestrian priority zones that allow bicycles insomuch as they yield to peds. (Magda Ibrahim | Evening Standard)

Wrestling with Moses once again: The Brooklyn Queens Expressway (BQE) in New York is headed for a long reconstruction job but the wealthy community that abuts the project will fight it tooth and nail to avoid disruption. All along the city has caved on delaying infrastructure projects while easier ones were pushed to the front of the cue. The best solution could be congestion pricing and reducing the need for reconstruction of a large road altogether. But it seems inevitable for this project to move forward and the fight that follows. (Ginia Bellafante | New York Times)

Does walkability trump transit access in land values?: A panel of developers and investors at the Urban Land Institute fall meeting in Boston believe that new mobility services are going to increase the attractiveness of walkable areas and decrease the potential value of transit oriented development over time. With transit ridership falling and new mobility ascendant, there might be a change on the horizon. (Kevin Brass | ULI)

Greener roads in an automated vehicle future: University of Minnesota researchers are thinking about how the urban design of cities would change with autonomous vehicles. Believing the vehicles will be able to drive in straighter paths on narrower roads, researchers envision more green space in alleys, parking lot redevelopment, and more pervious surfaces for water filtration. (Nicole Norfleet | Minneapolis Star Tribune)

We don’t go to New York because it’s technically illegal to use a scooter at the state level. Where there’s no laws, that’s where we go in.

This week on Talking Headways, we chat with Chloe Spano of Cityway about using data for better mobility. She talks about how Paris was able to reduce single occupancy vehicles in the core with better data.