Vos and Hintz both talk about their plans should they run Assembly after election.

By Shamane Mills, Wisconsin Public Radio - Oct 4th, 2018 12:20 pm
Get a daily rundown of the top stories on Urban Milwaukee 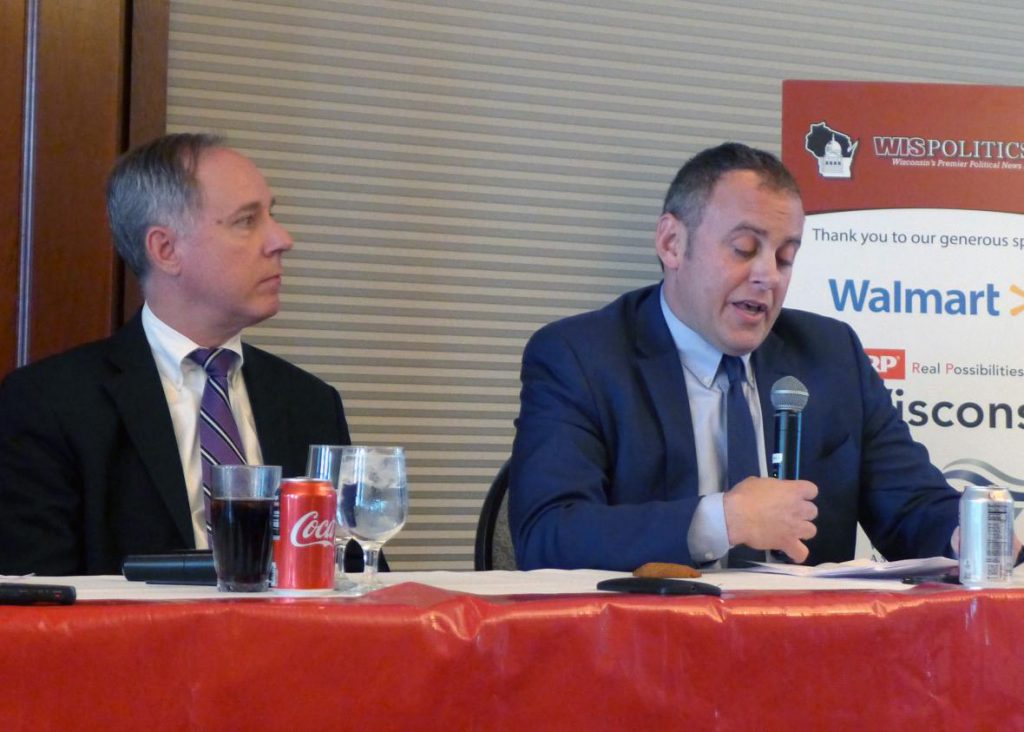 If state Democrats gain power in the Assembly after the November election, Minority Leader Gordon Hintz says the first bill introduced will be legislation to redraw political boundaries he says now favor Republicans.

“Voters should pick the politicians, not the other way around,” said Hintz, D-Oshkosh.

“That’s what I’ve always supported,” said Vos, who predicted Gov. Scott Walker’s most notable policy changes like voter ID requirements and collective bargaining changes for state employees will remain even if Democrats pick up some seats in the Assembly.

“I can promise you that if I am speaker again, we are not going to go back. I feel confident Gov. Walker is going to get re-elected … but if for some reason Tony Evers wins, we’re not going to repeal a single thing. Not one that we have done over the course of the past eight years, ” said Vos at a luncheon hosted Tuesday by WisPolitics at the Madison Club.

Which party is in control of the Legislature and who becomes governor will help determine how much money is spent on roads, education and economic development.

Tuesday, lawmakers announced they are calling an extraordinary session after the election to consider financial incentives for Kimberly-Clark Corp. Vos said it will keep family-supporting jobs in the Fox Valley.

“I hope the Senate passes it. I hope it’s bipartisan because I know we have some in the Republican caucus who’ve already said they’re opposed to the bill,” Vos said. “So it’s going to require Democrats stepping up like they did for the Bucks arena, and like some did on Foxconn. Let’s keep Kimberly-Clark right here in Wisconsin.”

An incentives package for the company has already passed the GOP-controlled Assembly.

Hintz noted the financial incentives are for existing jobs, not new ones.

“It would be a slippery slope if we start doing cash payments to a company that could just get rid of these jobs in a few years,” Hintz said. “We want to look at what the details are, if it’s a new bill, if they have a commitment to all of the Kimberly-Clark workers in the state.”

Funding for roads has also become an issue this election.

Walker has criticized his Democratic challenger Evers for not ruling out a possible hike in the gas tax. Vos pointed out at the forum that more fuel-efficient vehicles will mean less revenue and noted he supports toll roads. Hintz called this his “least favorite” option but said he’s open to the idea.

The gap is wider when it comes to health care. The two Assembly leaders disagree on whether to expand Medicaid.

Democrats have criticized Walker for rejecting federal dollars to expand Medicaid under the Affordable Care Act. The decision has cost the state close to $700 million in aid since 2014.