Shakespeare With Blood and Guts

Voices Found Repertory does ‘Titus Andronicus’ and doesn’t skimp on the terror. 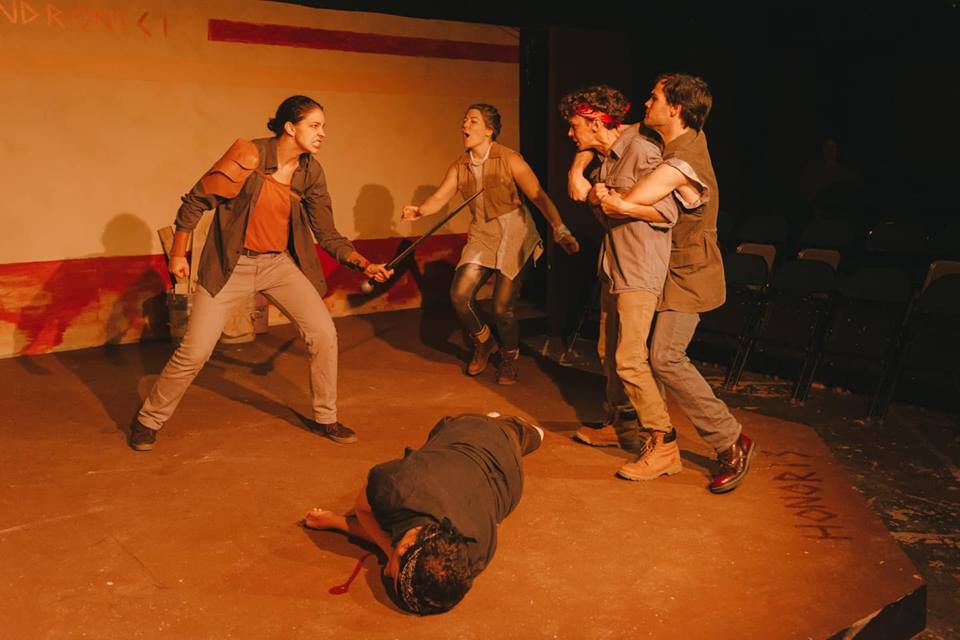 Some consider Titus Andronicus to be Shakespeare’s worst play. With an astronomical body count, rape, mutilation, torture, and cannibalism, it’s the Bard’s most violent work. But the play’s underlying themes—revenge, the quest for power, family loyalties—will always be relevant, perhaps more so than ever, given the current U.S. political climate.

Voices Found Repertory (VFR), a local theater group of young actors dedicated to performing Shakespeare’s plays with intensity and a creative twist, delivered a passionate interpretation of Titus Andronicus Saturday night at the Underground Collaborative, 161 W. Wisconsin Ave. (a venue located in the basement of the Grand Avenue Mall).

The talented cast delivered Shakespeare’s lines fluently, with clear enunciation, even amidst the shouting of fellow actors. Titus is by no means a quiet play, and in the small Underground Collaborative theater, the audience could hear every shriek, grunt and anguished cry.

Many of the actors, who also work in other capacities for VFR, gave standout performances.

Some of the traditionally male characters were played by women (Maya Danks as Titus, Brittany Byrnes as Aaron, Jessica Trznadel as Marcus, and director Hannah Kubiak as Quintus and Young Lucius). No gender has a monopoly on revenge, lust, and the thirst for power and control, and the actors stepped into the roles easily.

As Titus, Danks displayed an impressive range as an actor, easily vacillating between rage, despair, and insanity. She also demonstrated agility with swordplay.

Byrnes gave an electrifying performance as the scheming Aaron, Trzandel was well-cast as the wise, empathetic Marcus, and Kubiak injected her dual roles with a touch of comedy and lots of energy.

Kyle Conner brought the perfect amount of arrogance, humor, and irascibility to his character of the emperor, Saturninus, and paired nicely with Robin Lewis as Tamora, the conniving, bloodthirsty Queen of the Goths. Dressed stylishly in a black shirt, black pants, gold-and-white-striped jacket, and light-colored tie, Conner gave a performance reminiscent of Alan Cummings, who was cast as the flashy emperor in Titus, Julie Taymor’s 2000 film adaptation of the play.

Thomas Sebald and Donald Kozinski played the vicious sons of Tamora Demetrius and Chiron, incorporating lighthearted, brotherly banter into their savage acts. While despicable, they were enjoyable to watch, and were served with karma, and eventually as the main course, in Act II.

Teddi Jules Gardener commanded his role of Lucius with a good balance of contemplation, forcefulness and determination to carry on his father Titus’s legacy as emperor.

The modern-day costumes were mostly simple; with a few accessories. Titus’s daughter, Lavinia, (played well by Alexis Furseth, who also doubles as VFR director of marketing and public relations) whose innocence is brutally ripped away from her, wore leggings, a white tunic and veil; Aaron, who is a Moor, wore a black tank top, black leggings and boots; and Queen Tamora wore a long black dress, gold sequined jacket and small gold crown.

The two sets (designed by Michael Cienfuegos-Baca) and theater props (designed by Conner) were minimal but effective. The exterior of Titus’s white plaster home had the words “Roma” and “Andronici” painted on the walls. Two “windows” held ceramic vases. Utility buckets and other construction supplies seemed to represent the building of a new empire. The colors red and gold were prominent in the production; red representing blood, gold, royalty. When Titus asked Lavinia the name of her attackers, the girl, unable to speak, with bloody stumps for hands, managed to write their names in red paint on the stage floor, a more permanent alternative to Shakespeare’s stage direction of stick and dirt.

In Act II, plastic was draped over the walls, and the words “Vindictam

(Latin for “punishment” or “vengeance”) and a declension of the verb “occidere” (to kill) were written in red paint. A few letters were missing, perhaps representing the futility of all of the deaths.

A wooden farmhouse table doubled as the site for a stomach-turning scene of butchery, and for the infamous “dinner party from hell” scene.

The music ranged from the Rolling Stones’ “Gimme Shelter,” which opened the play, to foreboding ambient pieces to light classical during the dinner scene. Lighting designer Aaron Suggs skillfully used ominous shadows, and at times a red light to illuminate the stage.

While the subject matter of Titus Andronicus is certainly not for the faint of heart, Kubiak and the Voices crew have given the play plenty of color and emotional depth.

Titus Andronicus will run at the Underground Collaborative through October 7, with shows on Thursday through Saturday at 7:30 p.m. and Sunday at 2 p.m. Visit https://www.voicesfoundrep.com/ for more details.