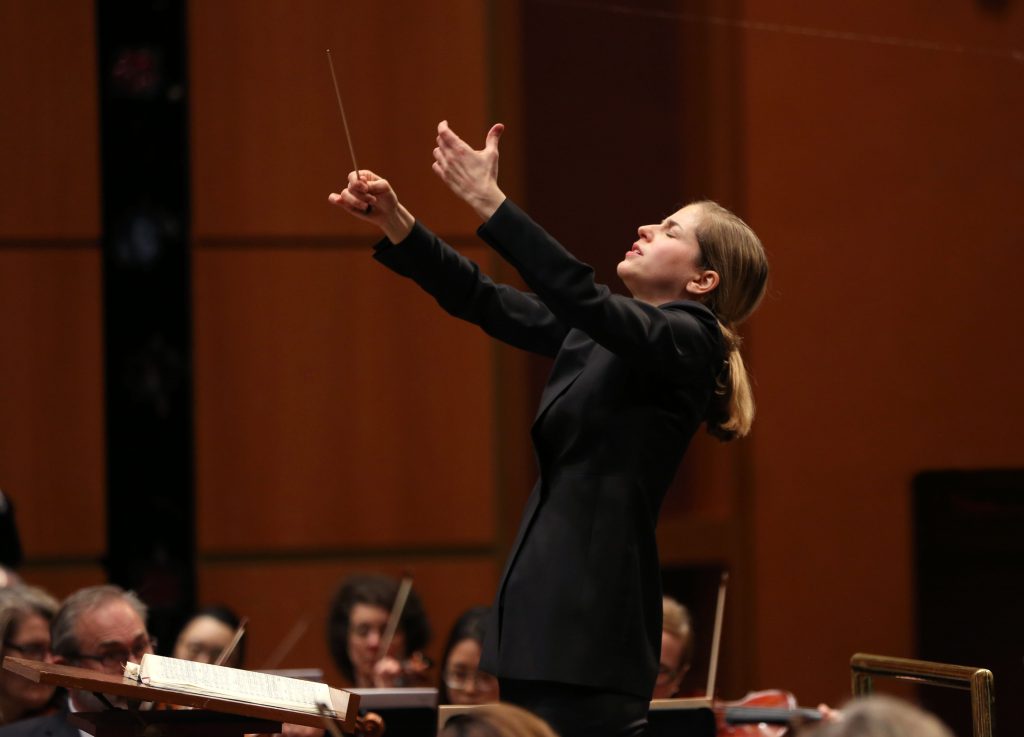 When Igor Stravinsky’s orchestra work “The Rite of Spring” premiered in Paris in 1913, listeners were shocked. Audiences walked out of the performance; music critics, including Henri Quittard of Le Figaro, mercilessly tore it apart.

Most everyone in the audience, from senior citizens to high school students, seemed enchanted by the MSO concert, which began with a performance of French composer Lili Boulanger’s “D’un Soir Triste” (One Sad Evening) and was followed by Antonin Dvorak’s Concerto in G Minor for Piano and Orchestra, Opus 33, with Sunwook Kim on piano.

Boulanger, the younger sister of conductor, composer and teacher Nadia Boulanger, composed the piece when she was just 24 years old, a few months before her death after a long illness. Lili Boulanger was hailed as a musical prodigy from a young age; her talents recognized by some of the era’s greatest composers, among them Gabriel Faure. There’s no telling what Boulanger might have accomplished musically, had she lived longer.

The haunting “D’un Soir Triste” is rarely performed live, and with its sinister brass, evocative strings, ethereal harp, and foreboding percussion, seemed a fitting piece to open the concert. The piece had a gothic quality– one could imagine a victim of heartbreak looking out of the window of an old dark house on a moonlit night.

“It’s very close to my heart. Hope you enjoy it,” Canellakis announced to the audience before the concert began.

Boulanger’s piece was followed by Dvorak’s Opus 33. The Czech Romantic-era composer, who experimented with different rhythms and tempos in this piece, was influenced by Slavic folk music, showcased especially in his lively second movement, Adante Sostenuto. The award-winning pianist Kim played the piece with the perfect amount of restraint, elegance and flair, incorporating watery arpeggios with crisp staccato.

After a brief intermission, symphony goers were treated to “The Rite of Spring.”

Stravinsky composed the ballet music for Sergei Diaghilev, founder of the Ballets Russes company. Prior to this, he composed “Firebird” (1910) and “Petrushka” (1911) for Diaghilev.

Influenced by Russian folk tales and paganism, “The Rite of Spring” celebrates the earth and beginning of a new season in its first part, “L’Adoration de la Terre” (Adoration of the Earth). A seer foretells the future; young girls dance. The earth is consecrated by the elders.

In Part II, “Le Sacrifice” (The Sacrifice), one of the girls is chosen by fate as a sacrifice to the earth. She then dances herself to death while the elders watch.

Many associate “The Rite of Spring” with Walt Disney’s 1940 animated film, Fantasia. In the film, the music is set to cartoons portraying the beginning of life on earth and the eventual extinction of dinosaurs.

“The Rite of Spring” features formidable string and percussion sections (the MSO performance included two timpani, a crotale, bass drum, symbols, a guiro, a tambourine, a triangle, and a tam tam), but brass and woodwinds are equally important. The piece opens with a mournful bassoon and subdued woodwinds and reeds join in, gradually growing louder.

True to Stravinsky’s composition, the performance featured lovely flute parts and incredibly versatile strings that sounded lush and romantic one minute and assaultive the next.

At times, the conductor was like a magician, summoning and quelling good and evil spirits with aplomb. Canellakis brought many of the instruments to a fever pitch several times, but the sound was never cacophonous—she was always in control, her passion for Stravinsky’s composition shining through.

According to the MSO Encore program, Canellakis is known for her “emotionally charged performances, technical command, and interpretative depth.”

The former assistant conductor of the Dallas Symphony Orchestra and graduate of the Curtis Institute of Music and the Julliard School couldn’t have picked a more fitting symphony to conduct, with all of its intensity.

Under Canellakis’s direction, the performance was a thrilling one indeed. Stravinsky’s piece depicts the indifference of nature, man’s most savage instincts, and his relationship with the earth. “The Rite of Spring” sounds dissonant, at times. But there’s vivid color and emotional punch to it all.

Canellakis and the MSO managed to suggest many visual interpretations of the piece — the green and fertile earth untouched by industry, pagans committing a horrific sacrifice in the name of ritual; prehistoric creatures roaming the land, then dying out — but always with potent musicality.