By Shawn Johnson, Wisconsin Public Radio - Sep 16th, 2018 08:50 am
Get a daily rundown of the top stories on Urban Milwaukee 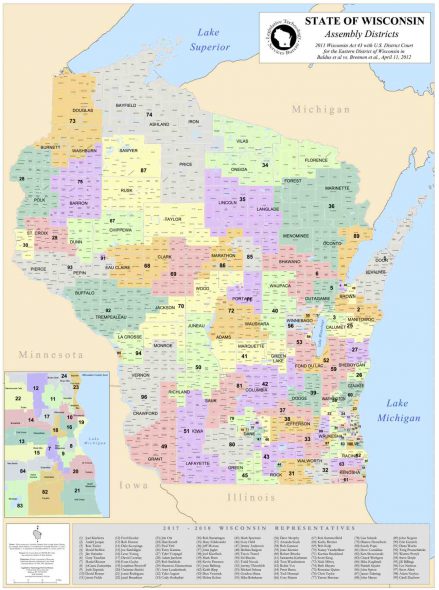 The Wisconsin Assembly district map at issue in Gill v. Whitford was approved in 2011. From the State of Wisconsin.

Wisconsin Democrats have re-filed a lawsuit that seeks to overturn the state’s Republican-drawn legislative districts, but the latest version has more than three times as many plaintiffs.

The original case, filed by 12 Democratic voters in 2015, made it all the way to the U.S. Supreme Court before justices there sent it back, ruling the plaintiffs lacked standing to overturn a statewide map.

Justices didn’t rule on the merits of the lawsuit, which made it possible for Democrats to revive the case under slightly different parameters.

This latest version was filed by 40 voters, including 33 who live in districts that Democrats say have been “unlawfully diluted” by the GOP district lines.

The new case also puts more of an emphasis on the First Amendment, contending plaintiffs’ constitutional right of association has been violated.

“They have been deterred from, and hindered in, turnout out to vote, registering voters, volunteering for campaigns, donating money to candidates, running for office, appealing to independents, and advocating and implementing their preferred policies,” the lawsuit states.

Other elements of the original case are the same.

It still contends that the district lines drawn in 2011 have been among the most skewed in modern U.S. history, citing the 2012 election when Republicans won 60 of the state’s 69 Assembly seats even though Democrats won a majority of the statewide Assembly vote.

The case seeks to have the current map thrown out for use in the 2020 election.

Regardless of what happens, this year’s elections will be conducted using the current map.